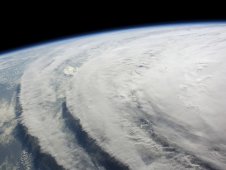 Hurricane Ike on September 10, 2008, taken by the crew of the International Space Station, flying 220 miles above Earth. (NASA) 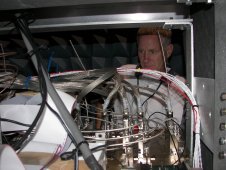 Scientists examine the inner workings of HIRAD. HIRAD is small, lightweight, relatively inexpensive, and has no moving parts, giving it a big advantage as it flies through hurricanes. (NASA) 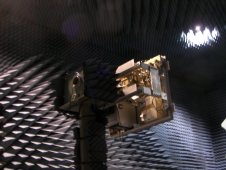 HIRAD is mounted for testing in an anechoic chamber, a chamber outfitted with foam spikes to eliminate all ambient microwaves so that scientists can properly test the instrument. (NASA) 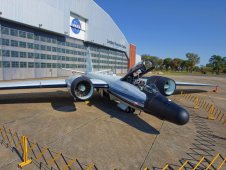 The instrument will fly on a WB-57 based at Ellington Field in Houston. The WB-57 is one of the few aircraft capable of operating at 60,000 feet, an altitude so high that the pilots have to wear special pressurized suits to withstand the harsh conditions. (NASA/S. Smith) 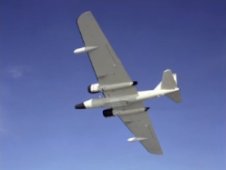 Dr. Tim Miller discusses HIRAD, an instrument that will fly in the GRIP campaign. View Video 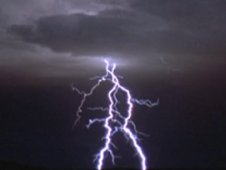 Dr. Tim Miller discusses the role of the Marshall Center in the upcoming hurricane study. View Video NASA researchers are furiously preparing for late summer when they will fly a series of unique hurricane instruments, including a brand new instrument that will take two-dimensional wind speed measurements over some of the world's fiercest storms.

The instrument will be part of a six-week NASA mission to study tropical cyclones beginning Aug. 15. The Genesis and Rapid Intensification Processes mission, or GRIP, will study the creation and rapid intensification of hurricanes. The campaign involves three planes with 15 instruments that will work together to create the most complete view of hurricanes to date.

Scientists and engineers at NASA's Marshall Space Flight Center in Huntsville, Ala. along with their partners from across the country have built the Hurricane Imaging Radiometer, HIRAD for short, to contribute to the effort. HIRAD will help determine the strength and structure of hurricanes by looking at wind speeds deep within the storm. This August and September, HIRAD will fly in the belly of a WB-57 airplane at about 60,000 feet, about twice the altitude of a commercial airliner.

Researchers across the world, including scientists at National Oceanic and Atmospheric Administration (NOAA) who have joined in HIRAD's development, hope it will provide key insight into some of nature's most puzzling questions. By allowing researchers to measure wind speeds inside the storm, HIRAD will give scientists some clues about why hurricanes behave like they do.

"The main thing we hope to do is improve the forecasts of intensity of a hurricane. Will it intensify? Will it maintain its intensity? Will it weaken? That's the hardest part of predicting hurricanes," says Dr. Tim Miller, HIRAD principal investigator and atmospheric scientist at the Marshall Center. "Of course, all science is incremental, but HIRAD hopes to make a fairly strong improvement to such forecasting."

Better predictions mean better preparations. Better predictions help people figure out when to evacuate, and when not to, as poor predictions and false alarms cost millions of dollars. More importantly, accurate forecasting builds credibility with the public so that they take evacuation warnings seriously.

HIRAD collects wind speed data by using a large antenna to measure the activity on the ocean's surface. The antenna is similar to a common radio antenna, but instead of detecting radio waves from a manufactured transmitter, it measures microwaves emitted from the ocean surface. As winds move across the surface of the sea they generate white, frothy foam. That sea foam causes the ocean surface to emit increasingly large amounts of microwave radiation, similar to the type of energy emitted by a typical home microwave oven. HIRAD captures that microwave energy and, in doing so, allows scientists to deduce how powerfully the wind is blowing.

Using the information provided by HIRAD, along with lots of other data, scientists can construct a more complete and detailed representation of the hurricane.

"We get lots of little pieces of information to figure out what's happening inside the storm," Miller explains. "We combine HIRAD's data with information from weather balloons, weather satellites and other instruments flying in the hurricane campaign, we put it all together, and we can potentially predict how a hurricane will behave."

HIRAD, measures not only directly under the plane, but also out to each side. "You can imagine if we just got a single line of measurements, we wouldn't see the full image of the wind speed. But because of HIRAD's design, we get the full two-dimensional picture," explains Miller. "Even though we're only measuring the ocean’s surface, computer models can take that information and use it to help develop a three-dimensional structure of the hurricane."

Designing and building HIRAD hasn't been easy. Engineers had to find the perfect materials to insulate the antenna elements and form the elements into the precise sizes and shapes that capture microwaves at the exact frequencies required. Fortunately, the HIRAD team's hard work is paying off. A successful flight in early 2010 revealed HIRAD is prepared to fly in NASA's upcoming study of hurricanes. Because a single flaw could mean failure, the HIRAD team works daily to keep the instrument in good shape and to reduce the risk of any problems that might arise.

During the hurricane study, HIRAD and the other instruments will likely fly several times over major storms in the Gulf of Mexico and Atlantic. Each mission will last roughly six hours, and Miller and his team from Marshall, NOAA, and the University of Michigan will monitor incoming data from the ground. Once the plane lands, the team will pull the remaining data from the plane and began their analysis.

For Miller, it's a fascinating challenge.

"I've always been interested in science. I grew up on a farm in Ohio, always saw the weather changing, and couldn't help but wonder why," he chuckles. "Hurricanes are big and complex, and a pretty challenging problem for someone who likes to understand how things work, why they do what they do."

After this fall's study, HIRAD will continue to fly in hurricane campaigns. The instrument has already been drafted for use in the Hurricane and Severe Storm Sentinel study that starts in 2011 and lasts for five years. But for now, Miller looks forward in anticipation to HIRAD's virgin flight this August.

"We're approaching it with enthusiasm and caution. If the storms are there, we need to get as much data from them as we can," he says. "Our fingers are crossed." If all goes well, HIRAD will have completed its first mission by late September. Once the flight is over, researchers will start to pore over and analyze the data. It will require countless hours of work, but the potential payoff is enormous.


Dr. Tim Miller discusses genesis and rapid intensification processes of hurricanes that will be
researched in NASA's upcoming hurricane study.


For now, Miller and his team are looking forward to the HIRAD's voyage with excitement and anticipation. Hopefully, HIRAD's journey will put NASA researchers one step closer to understanding some of the most powerful storms in the world.

For more information about the GRIP field experiment, visit: