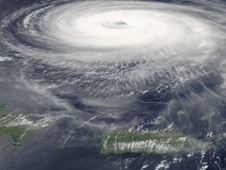 NASA scientists are readying to begin an intense, six-week research investigation into how hurricanes – like Isabel in 2003, pictured here – form and how the often rapidly intensify. This hurricane image was captured on Sept. 14, 2003 by the Moderate Resolution Imaging Spectroradiometer (MODIS) instrument onboard NASA’s Aqua satellite. Image credit: NASA 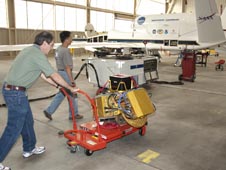 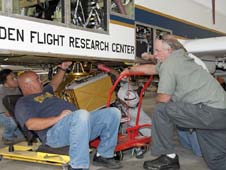 
In less than two weeks, NASA scientists will begin their quest for the holy grail of hurricane research.

The exact conditions required to kickstart a tropical depression into a hurricane largely remain a mystery. Though scientists know many of the ingredients needed, it is unclear what processes ultimately drive depressions to form into the intense, spinning storms that lash the U.S. coasts each summer.

"Hurricane formation and intensification is really the ‘holy grail' of this field," said Ed Zipser, an atmospheric scientist at the University of Utah and one of three program scientists helping to lead the Genesis and Rapid Intensification Processes (GRIP) experiment this summer.

With GRIP, NASA's first domestic hurricane project since 2001, the agency has assembled the largest-ever hurricane research experiment to investigate these questions. Three NASA planes, multiple NASA satellites and four planes from research partners NOAA and NSF will combine to make unprecedented measurements of tropical storms as they are forming (or dying out) and intensifying (or weakening). The intense scientific focus on these meteorological processes could provide new insight into the fundamental physics of hurricanes and ultimately improve our ability to forecast the strength of a storm at landfall. Predictions of hurricane strength continue to lag behind the accuracy of storm track predictions, but accurate predictions of both are needed for the best possible preparation before landfall.

With each aircraft outfitted with multiple instruments, scientists will be taking a closer look at hurricanes with hopes of gaining insight into which physical processes or large-scale environmental factors are the key triggers in hurricane formation and intensification.

The GRIP fleet includes NASA's Global Hawk, the unmanned drone built by Northrop Grumman and also used by the U.S. Air Force, WB-57 and DC-8. The NASA aircraft will be deployed from Florida (DC-8), Texas (WB-57) and California (Global Hawk) and will fly at varying altitudes over tropical storms in an attempt to capture them at different stages of development.

"One of the potential data-gathering breakthroughs of GRIP could be to continuously observe a tropical storm or hurricane for 24 hours straight, by including aircraft from all three agencies," said GRIP Project Manager Marilyn Vasques. The Global Hawk alone could fly continuously over a storm system for up to 16 hours.

While geostationary satellites used for forecasting can observe the basic movement of a storm across the Atlantic, these aircraft instruments will be able to "see" below the cloud-tops and uncover what is happening in the internal structure of the storm.

"That's what makes this really unique, the ability to observe one of these storms up close as it changes over its life-cycle. Before we've only been able to get a few hours of data at a time," Vasques said. "We want to see storms that become hurricanes, and we want to see some that don't become hurricanes, so we can compare the data. The same is true for hurricane intensification."

"When you think of analyzing it later, we want to break down what the temperatures were, what the winds were doing, what the aerosol concentration was, to see if we can start detecting a pattern," Vasques said.

The variety and number of instruments will allow scientists to investigate multiple science questions at once: What role does dust from the Sahara play in hurricane formation? Can lightning be used as a predictor of a storm's change in intensity? Do widespread environmental conditions such as humidity, temperature, precipitation and clouds lead to cyclone formation, or are smaller-scale interactions between some of these same elements the cause?

Scientists at NASA and the many academic and government research partners in GRIP are excited to put several new state-of-the-art hurricane observing instruments in the field. A powerful microwave radiometer and a radar will provide insight into the massive "hot towers" of convection found in cyclones, and a NASA-designed and –built lidar (laser radar) will provide the first-ever measurements of wind speed in three dimensions – not just east, west, north and south, but also vertically.

These instrument advancements, in addition to the deployment of the Global Hawk in a major Earth science campaign for the first time, have NASA scientists anxious to take to the field.

"This is one of the most exciting points in my career," said Ramesh Kakar, GRIP program manager and lead of NASA's recently formed Hurricane Science Research Team. "Satellites can only get a brief glimpse of what is happening inside a hurricane, and we get very excited about seeing that. Now imagine if you could watch a storm unfold for 20 hours."

The ability to keep an eye on developing storms for that length of time will largely depend on a complex deployment of the various planes, from different locations, at different times and at different altitudes. The NASA planes have different flight ranges, with the DC-8 able to fly for eight hours, the WB-57 four hours and the Global Hawk 30 hours. Those flight ranges include the time required to get to the storm and back to home base.

"In general, when the aircraft are deployed to study potentially developing hurricanes, they will fly a basic grid pattern over the weather system," Zipser said. ‘Ideally this pattern will be repeated on consecutive days. Once planes are flying over an established hurricane, they'll fly repeatedly over the eye of the storm and covering its breadth, creating somewhat of an asterisk pattern centered on the eye. Flights on consecutive days will deliver the best cache of data on how the storm changed over time."