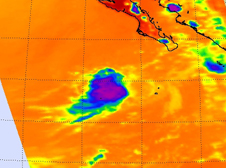 This infrared image of Frank was taken from NASA's AIRS instrument that flies on the Aqua satellite. It was taken on August 27 at 4:53 p.m. EDT, and showed that Frank had reduced in size, and the only strong convection was limited to the center of the storm (purple). Credit: NASA JPL, Ed Olsen
› Larger image NASA's 2010 hurricane experiment is in full swing as the tropics have heated up. NASA's Global Hawk unmanned aircraft was sent out over this past weekend to conduct measurements on then Tropical Storm Frank in the eastern Pacific Ocean, the first ever high-altitude flyover of a tropical cyclone with a UAS (unmanned aircraft system).

The GRIP campaign consists of three aircraft, 15 instruments and NASA satellites to better understand how tropical storms form and develop into major hurricanes.

At the pre-dawn hour of 5:50 a.m. PDT, Saturday, Aug. 28 the Global Hawk took off autonomously from the runway in the desert at Edwards Air Force Base, Calif. and spiraled over the air base to gain high altitude before heading west to the Pacific Ocean. An hour before the takeoff and after a pre-flight briefing, a group of about 20 scientists, engineers, pilots, and technical and aircraft support personnel were at their assigned stations in a specially designed operations room at the NASA Dryden Flight Research Center at Edwards, already monitoring all aspects of the jet's mechanical, electrical, communications, and scientific instrument status. They were prepared to staff, conduct, and monitor this flight for up to 18 hours.

The purpose of the flight was to test the Global Hawk’s capability to overfly the weather conditions that could be expected within a tropical cyclone, and test and evaluate the retrieval of data collected from several sophisticated remote-sensing instruments, including a radar and profilers, and its transmission back to the ground station. The target was a low-pressure system in the Eastern Pacific basin, just southwest of the Baja California peninsula in Mexico that was Hurricane Frank a couple of days before.

This photo of Tropical Storm Frank was taken from the HDVis camera on the underside of the Global Hawk aircraft on Saturday, Aug. 28, at 5:07 pm EDT as the aircraft approached Frank for the second time. The Global Hawk captured this photo from an altitude of 60,000 ft. (about 11.4 miles) Credit: NASA/NOAA
› Larger image

The camera on the underside of the Global Hawk provided several photographs of Tropical Storm Frank. As the Global Hawk approached Frank for the second time, flying at an altitude of 60,000 ft., the camera captured one photo on Saturday, Aug. 28 at 5:07 p.m. EDT that showed bands of thunderstorms around Frank's center.

At the time of the image, Frank's maximum sustained winds were near 55 knots (62 mph). Frank was located about 290 miles south-southwest of Cabo San Lucas, Mexico and churning in the waters of the eastern Pacific Ocean. Its center was near 19.3 North latitude and 112.2 West longitude. Frank was moving northwest at 6 mph (5 knots) at that time. Frank was weakening due to wind shear.

By Sunday, Aug. 29, 2010 at 10:51 p.m. EDT, Frank had become a remnant low pressure system. The remnant low had an elongated low level circulation with winds to 25 knots (29 mph) in the western quadrant. The winds continued to decrease overnight into Monday. On Monday, Aug. 30 at 5:26 a.m. EDT the National Hurricane Center noted that Frank's remnants were centered near 21 North and 11 West and Frank was dissipating. Rob Gutro
NASA's Goddard Space Flight Center

Mike Black
NOAA/OAR/AOML
› Back To Top