As a hurricane bears down on your town, wouldn't it be nice to have a better idea of just where it was going to land and how intense it would be? Knowing that could impact a potentially life-and-death decision, whether to leave or ride it out. 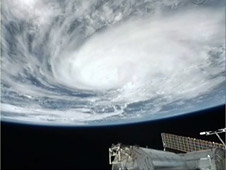 An instrument that recently flew on a NASA airborne science mission has the potential for helping with that choice. The Doppler Aerosol Wind (DAWN) lidar compiles three-dimensional wind profiles – the first instrument of its kind to do so – that will improve hurricane forecasting models.

Data from the laser instrument will be added to the prediction models of the National Oceanographic and Atmospheric Administration (NOAA), which provides weather forecasting services for the U.S., said Michael Kavaya, principal investigator for DAWN at NASA's Langley Research Center in Hampton, Va.

"This will help us better predict the track that a hurricane follows, the intensity of the hurricane, and whether a weather system developing out in the Atlantic off Africa becomes a hurricane," said Kavaya.

DAWN flew last year on a NASA DC-8 research aircraft as part of the Genesis and Rapid Intensification Process (GRIP) mission. The mission was designed to better understand how tropical storms form and develop into major hurricanes. 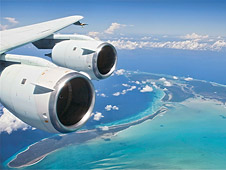 NASA's DC-8 research airplane flies over the Caribbean during a mission to study hurricanes. NASA/Sean Smith

During the mission, NASA research aircraft observed hurricanes Karl and Earl and Tropical Storm Matthew in the Caribbean and Gulf of Mexico in September 2010. The mission included six NASA centers, three NASA satellites, three aircraft, 14 instruments and many scientists and engineers.

Kakar said independent measurements that were compared to those by DAWN showed "quite impressive" agreement.

3-D Winds is the tentative name for such a satellite. 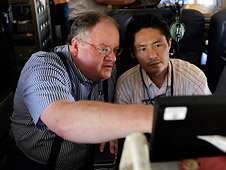 NASA Langley's Michael Kavaya, left, looks over data with Jeffrey Beyon during a flight of the NASA DC-8 in the Gulf of Mexico last August. Photo Credit: NASA/Paul E. Alers

"That's our latest name for this mission that people have been dreaming about for 30 years," Kavaya said. "We've had several started and not finished before. It's just hard to do. The technology was not ready. The lasers weren't ready."

DAWN has its roots in lidar technology developed over decades. The ultimate goal is to position a DAWN-like instrument in space, perhaps on the International Space Station, Kavaya said, "with the purpose of improving weather prediction."

Participation in the GRIP campaign was one step in the process.

Motivation for the effort also comes from the National Research Council's 2007 report "Earth Science and Applications from Space: National Imperatives for the Next Decade and beyond." A mission to accomplish 3-D wind profiling is one of the council's 15 top priorities for the decade in Earth science.

Being able to improve the prediction of hurricane track and intensity has obvious benefits to society in addition to saving lives, Kavaya noted.

"Two things happen with poor prediction of track and intensity," he said. "One is that if people evacuate and you're wrong, you've wasted a huge amount of money. Two, people learn to ignore it when you tell them to evacuate and you've been wrong before."