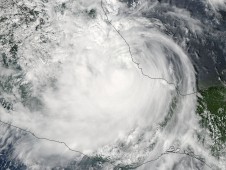 › View larger image
This visible image from the MODIS instrument on NASA's Aqua satellite shows Hurricane Karl after landfall on Sept. 17 at 19:35 UTC (3:35 p.m. EDT). About 2/3rds of Karl was already over land by that time.
Credit: NASA/MODIS Rapid Response Team 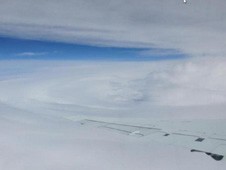 › View larger image
This photo was taken looking out of the window of the DC-8 aircraft on the afternoon of Friday, Sept. 17, about 3 hours after Hurricane Karl made landfall in Mexico. It was taken from an altitude of about 37,000 feet while flying over Karl.
Credit: NASA 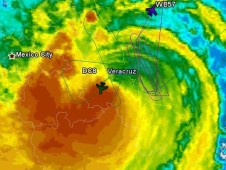 › View larger image
These are the flight tracks of the DC8 and WB7 over/around Hurricane Karl as of 4:10 p.m. EDT on Sept. 17, 2010.
Credit: NASA Hurricane Karl made landfall near Veracruz, Mexico on Friday, Sept. 17 and moved inland over Mexico's rugged terrain, which took the punch out of the storm. As Karl was moving into Mexico, NASA aircraft and NASA satellites were gathering data from this storm that jumped from a tropical storm to a Category 3 hurricane the day before.

Karl had maximum sustained winds of 115 mph when it made landfall on Friday afternoon, Sept. 17. That made Karl a Category three hurricane on the Saffir-Simpson scale, and a major hurricane to boot.

On that day, NASA's Genesis and Rapid Intensification Processes (GRIP) aircraft were flying over Karl and taking readings of the storm's winds, temperature, pressure and more. The DC-8 aircraft was one of the planes that flew into Karl at an altitude of 37,000 feet on the afternoon of Friday, Sept. 17, about 3 hours after Hurricane Karl made landfall in Mexico. The DC-8 aircraft took off from its base in Fort Lauderdale, Fla. All nine instruments installed on the DC-8 collected data during its flight over the storm system, and dropsondes were launched successfully to aid the other instruments in gauging wind profiles and moisture content.

Meanwhile, NASA's WB-57 took off from its base in Houston, Texas and joined the DC-8 for flights over Hurricane Karl in mid-afternoon on Sept. 17. The WB-57 flew higher than the DC-8 aircraft, at an altitude between 56,000 and 58.000 feet. The WB-57 has two instruments aboard to study tropical cyclones: the Advanced Microwave Precipitation Radiometer (AMPR) and the HIRAD (Hurricane Imaging Radiometer). AMPR studies rain cloud systems, but are also useful to studies of various ocean and land surface processes. The HIRAD measures strong ocean surface winds through heavy rain, providing information on both rain rate and wind speed. For more information on the NASA GRIP Mission, visit: www.nasa.gov/grip.

From its vantage point in space, NASA's Aqua satellite captured a much wider view of Hurricane Karl after it made landfall on Sept. 17. The Moderate Resolution Imaging Spectroradiometer (MODIS) instrument on Aqua captured a visible image at 19:35 UTC (3:35 p.m. EDT) and showed that two-thirds of Karl was already over land.

Karl's heavy rainfall was responsible for inland flooding and evacuations. Reports indicated that almost half a million people were without electricity, and over 20,000 homes were damaged or flooded. Over 40,000 people were evacuated from the municipalities of Jamapa, La Antigua, Medellin de Bravo, Cotaxtla and Actopanm. Reports indicated eight people missing and seven dead from Karl's rampage.

By Saturday morning, Sept. 18, Karl's maximum sustained winds were down to 25 mph. By Sunday, Sept. 19, the National Hurricane Center in Miami, Fla. proclaimed that Karl had dissipated over inland Mexico.