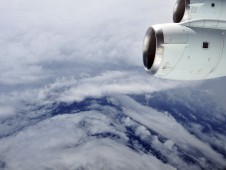 > View larger image
NASA’s DC-8 flew to Hurricane Earl four times in the past week to collect data as the storm both strengthened and weakened. This image shows one of the DC-8’s passes through the eye of Earl on Aug. 30. NASA’s Genesis and Rapid Intensification Processes (GRIP) experiment was designed to collect new data on how hurricanes form and how they strengthen and weaken, which remain elusive questions for hurricane scientists.
Credit: NASA/Jane Peterson 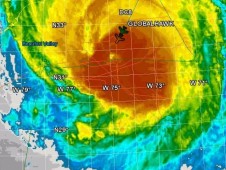 The Global Hawk also flew in concert with NASA’s DC-8 during the DC-8’s fourth and final research flight to Earl. Both planes are outfitted with a suite of highly advanced instruments that scientists hope will bring new insight into how hurricanes form and intensify.

Thursday marked the first day of the Genesis and Rapid Intensification Processes (GRIP) experiment when two NASA aircraft involved were flying and studying a storm at the same time. The experiment was designed to take advantage of having multiple aircraft above a storm at once, in order to observe hurricanes and tropical storms in as many facets as possible.

As Earl changed over the course of the week, the hurricane turned into an almost ideal test bed for GRIP. The DC-8 flew to Earl four times, including twice from St. Croix in order to reach it when it was farther east. GRIP scientists designed the mission in order to capture a hurricane either as it was forming or as it was strengthening or fizzling. And the Earl flights delivered, allowing scientists to observe the storm rapidly intensifying earlier in the week and then collapsing to a degree later in the week.

A Sunday flight from St. Croix put the DC-8 over Earl as it intensified from a Category 1 to a Category 2. And Monday’s flight from Ft. Lauderdale allowed the DC-8’s instruments to observe what was happening as Earl went from a Category 3 to a Category 4. One of GRIP’s key goals is to help scientists understand why and how some hurricanes rapidly intensify. These flights collected important data toward that end, scientists said.

Earl had surprised scientists earlier in the week when they saw that it was surrounded by dry air. Hurricanes often derive strength from moist air and weaken when dry air infiltrates the cyclone.

“What happened?” said GRIP mission scientist Ed Zipser of the University of Utah. “The storm continued to intensify in spite of that. And we need to know why.”

Then during Thursday’s flight, as Earl spun toward North Carolina but also lost strength, GRIP scientists made measurements from the storm as its eye wall collapsed and as it dropped from a Category 3 to a Category 2 hurricane. At first blush, it appeared that wind shear played a role in breaking up the storm.

“It doesn’t matter if it did what we thought it was going to,” Zipser said. “It matters that it did something interesting and that we were there to observe it.”

Now that the Global Hawk has successfully flown over an Atlantic hurricane all the way from its base in southern California, the GRIP team is hoping for more opportunities to put the groundbreaking aircraft in the field. Because of the drone’s 30-hour flight range, it can remain directly over a storm to make high-quality measurements far longer than a manned plane or a satellite.

The GRIP mission will continue to fly until Sept. 25. So scientists are hoping for more research opportunities like Earl provided this week.

“Yesterday’s flight was a historic flight because we were able to put the Global Hawk over a hurricane for the first time,” said Ramesh Kakar, GRIP program manager from NASA Headquarters, Washington. “Earl has allowed us to fulfill a lot of our objectives, but, we have almost a month to go.”