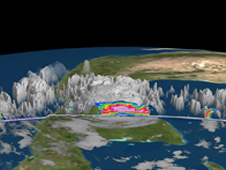 › View larger image
NASA's CloudSat satellite captured a slice of Hurricane Karl's clouds at 07:59 UTC (3:59 a.m. EDT) Sept. 17. CloudSat shows clouds are over 8 miles high. The blue areas along the top of the clouds indicate cloud ice. The highest clouds in Karl at the time of the image were as cold as -40 Celsius (-40 Fahrenheit) to -60C (-76 Fahrenheit). That line disappears where there is strong rainfall exceeding 30mm/hr (1.18 inches/hour).
Credit: NASA/JPL/Colorado State Univ./NRL 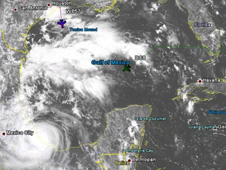 Meanwhile, NASA's "GRIP" mission was also underway as aircraft were gathering valuable data about Hurricane Karl as he moves inland. NASA's Genesis and Rapid Intensification Processes mission (known as GRIP) is still underway and is studying the rapid intensification of storms, and that's exactly what Karl did on Thursday Sept. 16 overnight into Friday, Sept. 17. During that time, Karl went from a tropical storm to a Category 3 hurricane, and NASA's GRIP aircraft flew into Karl a number of times collecting valuable data on its rapid intensification.

In fact, three of NASA's science aircraft completed successful coordinated flights over Hurricane Karl on Thursday, Sept. 16, in the southern Gulf of Mexico. The DC-8 conducted 6 passes over the center of circulation with a butterfly pattern about the eye on the final pass. The Global Hawk flew 6 coordinated legs with the DC-8 over the storm for a total of 20 passes over the eye of the hurricane. The Global Hawk returned to its base of operations in southern California early Friday morning, Sept. 17.

NASA’s DC-8, based in Florida, and WB-57, based in Texas, went back to Hurricane Karl as it approached the coast of Mexico on the afternoon of Friday, Sept. 17. The two research aircraft also observed the hurricane on Sept. 16 along with NASA’s Global Hawk. For more information on the NASA GRIP mission, visit: www.nasa.gov/grip.

From its vantage point in space, NASA's CloudSat satellite has the unique capability of seeing a tropical storm from its side. CloudSat's Cloud Profiling Radar captured a sideways look across Hurricane Karl's clouds at 07:59 UTC (3:59 a.m. EDT) Sept. 17.

CloudSat's 55 second scan showed cloud tops were over 8 miles high, and indicated ice in them. In fact, the highest clouds in Karl at the time of the image were as cold as -40 Celsius (-40 Fahrenheit) to -60C (-76 Fahrenheit). CloudSat also showed strong rainfall exceeding 30mm/hr (1.18 inches/hour) which confirms the moderate to heavy rain that was falling from the storm.

Hurricane Karl built up a lot of power overnight. On Sept. 16 at 5 p.m. EDT, his maximum sustained winds were near 80 mph. On Sept. 17 at 11 a.m. EDT, Karl's maximum sustained winds were near 120 mph with higher gusts. Karl is a Category 3 on the Saffir-Simpson hurricane scale. Hurricane force winds extend 25 miles out from Karl's center and tropical storm force winds extend out to 90 miles, making Karl about 180 miles in diameter. For size comparison, Hurricane Igor is 550 miles across out in the Atlantic Ocean.

Karl is making landfall this afternoon (Sept. 17) and is moving west near 8 mph. Karl will move inland tonight and Saturday. Karl's minimum central pressure is 967 millibars.

Karl is bringing a lot of bad weather to Mexico this weekend. The National Hurricane Center said "A dangerous storm surge will raise water levels by as much as 12 to 15 feet above normal tide levels along the immediate coast near and to the north of where the center makes landfall. Near the coast...the surge will be accompanied by large and destructive waves." Hurricane-force winds will continue to spread inland, and rainfall accumulations will range from 5 to 10 inches across the central and southern Mexican gulf coast region, with isolated amounts as high as 15 inches.