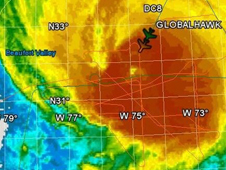 This image from the GRIP Real Time Mission Monitor system shows the Global Hawk and DC-8 flying in formation across Hurricane Earl on Thursday, Sept. 2, marking the first time the Global Hawk flew over a hurricane. The unmanned aircraft's extended flight range has scientists excited to observe hurricanes for unprecedented periods of time. (NASA image)
› View Larger Image With no targets of interest within their range, NASA science aircraft, their flight crews and scientists involved in the current hurricane research campaign have remained on the ground between Sept. 8 and 11. Those "no fly" days are expected to end this weekend, as managers of the agency's Genesis and Rapid Intensification Processes, or GRIP, mission have requested both the DC-8 flying science laboratory and the long-endurance Global Hawk to take to the skies to probe a developing storm over the Caribbean Sea.

Both NASA aircraft are scheduled to be aloft on Sunday, Sept. 12, to gather data over an unnamed tropical depression called AL-92 that is developing over open waters near Trinidad south of Haiti and the Dominican Republic and north of Venezuela. The coordinated flights by the NASA aircraft may be joined by another science aircraft from the National Center for Atmospheric Research, or NCAR, that is participating in the campaign.

Global Hawk payload engineer David Fratello at NASA's Dryden Flight Research Center advised that the remotely operated Global Hawk is scheduled for a 25-hour mission that would take it from Edwards Air Force Base in Southern California to the area of the storm and back. He indicated researchers hope to have the high-altitude craft over AL-92 for at least five hours, although most of the flight time would be absorbed in transit between its base and the Caribbean. Takeoff time is slated for 4:30 a.m. Sunday, with a pre-sunrise return early Monday morning, Sept. 13.

DC-8 mission manager Bob Curry reported that the DC-8 is scheduled to depart its deployment base at Ft. Lauderdale, Fla., at 2 p.m. EDT Sunday to survey the same storm system. If the system continues to develop, it is likely the DC-8 will also fly on Monday and Tuesday.

Fratello noted that both flights could be delayed a day or two, depending on a reassessment of the developing storm system by mission managers on Saturday, Sept. 11.

In the meantime, NCAR engineers and technicians are working on a fix to NCAR's autonomous dropsonde deployment system on the Global Hawk that failed during a check flight in late August. All other instruments on the aircraft are functioning properly.

The GRIP mission, which continues through Sept. 30, is designed to help improve our understanding of how hurricanes such as Earl form and intensify rapidly.