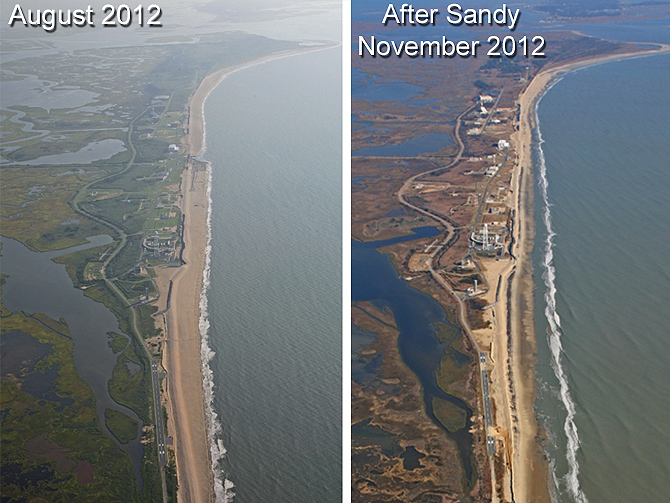 › View larger
Aerial photographs of the NASA Wallops facility and coastline. On the left is from August 2012 after completion of a Shoreline Protection Project. On the right is from November 2012 after Hurricane Sandy swept by. Credit: NASA
Hurricane Sandy came ashore in northern New Jersey Oct. 29, 2012, and as the powerful storm made its way along the East Coast it brought damage to NASA's Wallops Flight Facility in Wallops Island, Va. The Wallops Shoreline Protection Project has been managing the restoration efforts and released before and after photos of the shoreline.

The beach, which had been recently improved under the Wallops Island Shoreline Protection Project is vital to protecting the more than $1 billion in NASA and governmental assets on Wallops Island from hazards such as hurricanes and nor'easters.

In addition to beach erosion, Hurricane Sandy caused minor roof, door and siding damage and downed trees throughout the facility. 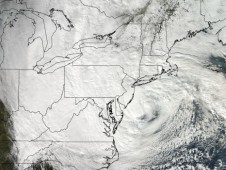 NASA Goddard Space Flight Center's Wallops Flight Facility (WFF) was established in 1945 by the National Advisory Committee for Aeronautics as a center for aeronautics research, and is now NASA's principal facility for managing and implementing suborbital research programs.

WFF is located in the northeastern portion of Accomack County, Va., on the Delmarva Peninsula, and is comprised of three land masses: the Main Base, Wallops Mainland and Wallops Island. Wallops Island consists of approximately 1,680 hectares (4,600 acres), is bounded by Chincoteague Inlet to the north, Assawoman Island to the south, the Atlantic Ocean to the east and estuaries to the west.