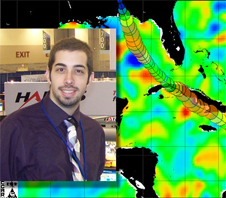 John Sears studys meteorology at Plymouth State University in New Hampshire. Credit: NASA JPL
> Larger image JPL oceanographer William Patzert wasn't surprised to see a poster on sea surface height and hurricane intensity at this year's meeting of the American Meteorological Society. A number of recent studies have shown that satellite measurements of sea surface height, which show where and how much heat is stored in the ocean, are useful in predicting if hurricanes will strengthen as they travel over water.

What surprised Patzert was that the poster's first author wasn't a university faculty member or a government scientist. He was college student John Sears, a senior studying meteorology at Plymouth State University in New Hampshire.

The poster was the result of Sears' work with researchers at NASA's Marshall Space Flight Center, Huntsville, Ala. Sears spent 10 weeks at Marshall last summer as part of the NASA Academy, an educational program for college students interested in space-related fields.

At Marshall, Sears was teamed up with a group of researchers led by atmospheric scientist Robbie Hood, now director of unmanned aircraft systems at the National Oceanic and Atmospheric Administration. "They were expanding their research on three storms that they had observed during a 2005 field experiment--Hurricane Dennis, Hurricane Emily, and tropical storm Gert," says Sears. "They suggested I look at the sea surface height data. It was my job to see what was out there, map it, and integrate it with their own data."

Sears presented the results of his work to his colleagues at the NASA Academy and created the poster for the American Meteorological Society with additional support from a New Hampshire space grant. His co-authors on the poster are Robbie Hood and Frank LaFontaine, of NASA Marshall.

"John's understanding of the hurricane/sea surface height connection and his enthusiasm for this research captivated many of us at the American Meteorological Society Meeting," said Patzert. "These NASA programs that engage and mentor undergraduate students are super, and John did great work."

Sears is scheduled to graduate from college this spring and plans to attend graduate school in atmospheric science. NASA's Jet Propulsion Lab
› Back To Top