Grow Text SizeShrink Text Size
Hurricane Katrina: A NASA Satellite Video Retrospective
In early August 2005, Katrina was just a name. By September, it had become synonymous with the costliest and one of the deadliest tropical cyclones in U.S. history.

On this anniversary, NASA is revisiting Hurricane Katrina with a short video that shows the storm as captured by NASA satellites. NASA provides space-based satellite observations, field research missions, and computer climate modeling to further scientists' understanding of these storms. NASA also provides measurements and modeling of global sea surface temperatures, precipitation, winds and ocean heat content -- all ingredients that contribute to the formation of tropical cyclones (the general name for typhoons, tropical storms and hurricanes).


On Aug. 29, 2005, after passing over the Caribbean and Florida, Katrina made landfall along the Gulf Coast as a category 3 hurricane on the Saffir-Simpson scale. As hurricanes go, Katrina was actually only moderate in size when it reached the Mississippi and Louisiana coasts, having weakened from a category 5 the day before. However, Katrina had a very wide footprint, which caused a broad area of large ocean swells to develop within the Gulf of Mexico. As the hurricane made its final landfall, the resulting storm surge was massive and unrelenting. Ultimately, this storm surge was responsible for much of the damage as it flooded coastal communities, overwhelmed levees, and left at least 80 percent of New Orleans underwater. 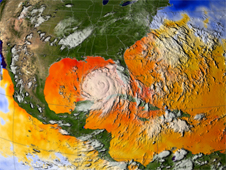 This image was created from AMSR-E data on NASA's Aqua satellite and shows a 3-day average of actual sea surface temperatures (SSTs) for the Caribbean Sea and Atlantic Ocean, from August 25-27, 2005. Yellow, orange or red areas are 82 degrees Fahrenheit or above (80F is needed to maintain hurricanes). The position of Katrina is from Aug. 27. Credit: NASA Goddard's Scientific Visualization Studio › Larger image
By the time the hurricane subsided, Katrina had claimed more than 1,800 human lives and caused roughly $125 billion in damages.

As scientists and rescue organizations worked on the ground to prepare for the hurricane and assist in its wake, NASA provided data gathered from a series of Earth-observing satellites to help predict the hurricane's path and intensity. In the aftermath, NASA satellites also helped identify areas hardest hit.

In this 3 1/2-minute video created by NASA-TV producer Jennifer Shoemaker at NASA's Goddard Space Flight Center in Greenbelt, Md., viewers will see many different kinds of data NASA satellites gathered about the storm. The video contains a sampling of the kinds of things NASA studies about hurricanes. Various additional data products are created in hurricane and post-hurricane research that are not depicted in the video.

Finally, the video shows Landsat satellite imagery of New Orleans before and during the flooding, as well as a more recent view of a city still rebuilding from the hurricane some five years later.

Katrina was just one of 28 named tropical cyclones during the 2005 hurricane season, but due to the tragedy it caused, it remains the one most remembered. The World Meteorological Organization has since retired the name "Katrina" from its list of hurricane names. As such, there will never be another Hurricane Katrina.

Meanwhile, NASA satellites continue to provide satellite data to study tropical cyclones around the world and to help forecasters make better predictions about storm's behavior and hurricane response organizations to better prepare for those yet to come. NASA also studies the effects of hurricanes long after the storm has passed, in order to better understand effects of large storms, which will ultimately help in restoration and preparation efforts in the future.