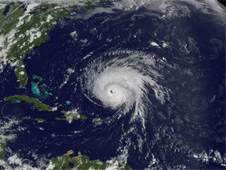 NASA's Geostationary Operational Environmental Satellite (GOES) Project is offering real-time HDTV movies of the east- and west-coast "hurricane alley" regions. There are two types of movies for both the Eastern Pacific Ocean and the Atlantic Ocean. There are "Coastal" and "Global" movies. The two coastal movies (one for each ocean) show four satellite image frames per hour over the previous two days. The two global movies show two frames per hour over the most recent three days. All four movies are automatically updated every hour.

"The color frames are composed by overlaying the National Oceanic and Atmospheric Administration's (NOAA) GOES cloud images on a true-color background previously derived from NASA's Moderate Imaging Spectroradiometer (MODIS) imager," said GOES Project Scientist Dennis Chesters on the NASA GOES Project at Goddard. MODIS is an instrument that flies aboard NASA's Aqua and Terra satellites to provide color imagery of the Earth's surface. "The GOES infrared images show the convective storms 24 hours a day. During daylight, the GOES visible images reveal the low clouds that provide detail and a sense of the low-level winds," Chesters said.

Hurricanes develop far from land in wide areas of the sub-tropical Atlantic and Pacific oceans, where only satellites can provide up-to-date weather data. NASA's GOES Project has created a method to animate satellite imagery on a true-color map over that large area to watch the early development of hurricanes.

"These new live animations provide panoramic views of each hurricane alley in HDTV wide-screen format," Chesters said. Viewers can see tropical cyclones in the Pacific developing off of the western Mexican or Central American coasts, potentially threatening Mexico or Hawaii. The Atlantic panorama revels the potential hurricanes that threaten the Caribbean islands and the USA's eastern and gulf coasts, and also shows the constant flow of convective storms across the eastern United States.

All of the animations can be found at the NASA GOES Project Web page: http://goes.gsfc.nasa.gov/. There are four links, each labeled "Hurricane Alley HDTV," next to the GOES-EAST and the GOES-WEST images of the USA and the globe. Each link delivers a hurricane alley movie from the area suggested by the image next to the link.

For example, to see what's happening in the always stormy Atlantic, click the link next to the GOES-EAST global image: http://goes.gsfc.nasa.gov/goescolor/goeseast/overview2/movie/alley_east_globe.mp4

Stretch your browser window wide to see the entire panorama.

The "global view" of the Atlantic Ocean is most interesting because it displays several weather regimes simultaneously. It shows the easterly winds in Hurricane Alley, daily thunderstorms over the Antilles, storms across the southeast U.S., the prevailing westerly winds and Atlantic storms at mid-latitudes.

There is a little date/time stamp in the lower left corner of each frame so viewers know which day they're viewing. The date/time is odometer-style: YYMMDDhhmm, an abbreviation for YEAR-MONTH-DAY-hour-minute, and is in Universal Time.

Hurricane Alley animations can be found at the NASA GOES Project Web page.