Grow Text SizeShrink Text Size
GOES Satellites Capture Holiday Weather Travel Conditions
Travelers over the long holiday weekend can count on one Christmas present: great satellite data from the GOES series of satellites to help them in their travels. Data from the GOES-13 and GOES-11 satellites were used to create a full image of the continental U.S. on Dec. 23 at 1145 UTC (6:45 a.m. EST) as travelers make their way across the country to their holiday destinations. 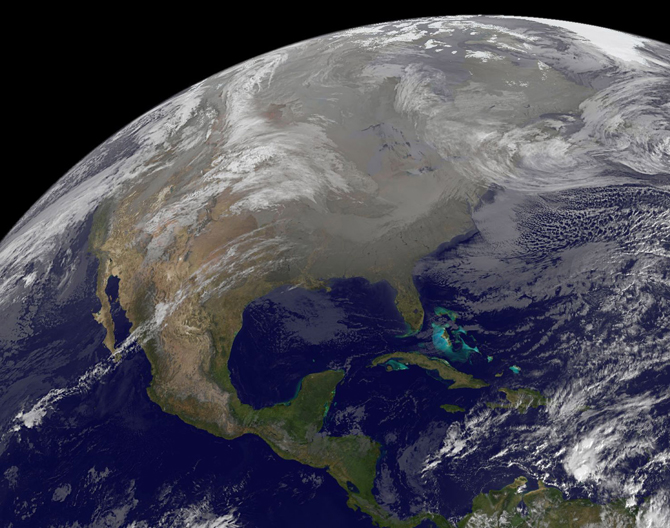 Data from the GOES-13 and GOES-11 satellites were used to create a full image of the continental U.S. on Dec. 23 at 1145 UTC (6:45 a.m. EST) as travelers make their way across the country to their holiday destinations. The area clouds from the U.S. southwest stretching north are associated with a low pressure area over Colorado. The clouds over eastern New England are associated with a low already out to sea, and clouds moving into the Pacific Northwest are associated with an eastward moving cold front. (Credit: NOAA/NASA GOES Project)
› Larger image

GOES-13 and GOES-11 are the Geostationary Operational Environmental Satellites that monitor the nation's weather for the U.S. GOES satellites are operated by NOAA, and images and animations are created at the NASA GOES Project at NASA's Goddard Space Flight Center in Greenbelt, Md.

The GOES-11 satellite is stationary over the western U.S. and provides imagery of that half of the country in addition to visible and infrared images of the eastern and central Pacific Oceans. GOES-13 covers the eastern half of the nation and the Atlantic Ocean. The holiday travel image combines data from both of these satellites.

The image showed a large area clouds from the U.S. southwest stretching north. Those clouds are associated with a low pressure area currently over Colorado. The storm system affecting the Southwest is forecast to move eastward and slide off the coast. It could then track north along the coast and bring some heavy winter weather to coastal areas from the Carolinas northward. Travel could be affected particularly Sunday and Monday along the U.S. East coast from this storm system. NOAA will be tracking the storm and issuing forecasts over the weekend as the low moves. On Thursday, Dec. 23, the GOES image showed clouds over eastern New England that are associated with a low already out to sea and taking rain with it.

In the upper Midwest and Southern Plains states a short wave of energy is going through the region. Some snow showers are forecast for Thursday night, Friday and Saturday in Milwaukee, Wisconsin. Snow is forecast in Kansas City, Missouri on Friday, while some sun and flurries are expected on Christmas day. Areas of the Midwest should also be on guard for freezing rain, sleet and snow over the weekend.

Farther south along the Gulf coast, New Orleans will see temperatures fall from today through Christmas with highs going from the upper 50s into the 40s for highs. It looks like a rainy day on Christmas there, as that low over Colorado keeps pushing east toward the U.S. East Coast.

Orlando, Florida will sunshine Friday and Christmas day with temperatures in the upper 60s before it cools back to near 60F on Sunday.

Meanwhile, cloud cover approaching the Pacific Northwest is associated with a cold front, which is expected to bring more wet weather to the region from Thursday through Sunday. Since last week, as much as 17 feet of snow had falling in parts of the Sierra Nevada Mountains, while more than two feet of rain has soaked areas of California causing serious flooding. However, sunshine is on tap for Los Angeles on both Christmas Eve and Christmas day, and that's a welcome weather present.

Wherever travelers go over the holiday weekend, they should keep their eyes on GOES satellite imagery, watch their local forecasts and check their flight times to have a safe holiday. Rob Gutro
NASA's Goddard Space Flight Center, Greenbelt, Md.
› Back To Top