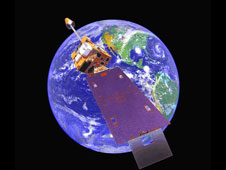 This is an artist's rendering of GOES-10 in orbit. Credit: NOAA
› Larger Image On December 2, the National Oceanic and Atmospheric Administration (NOAA) officially deactivated its Geostationary Operational Environmental Satellite-10 (GOES-10) after 12 years of service. By May 2010, the GOES-12 satellite will replace GOES-10, which was covering South America, and GOES-13 will take GOES-12's place over the eastern U.S.

NASA's GOES Project is operated out of NASA Goddard Space Flight Center in Greenbelt, Md. NASA launches GOES satellites and turns them over to NOAA once they are operating properly in orbit. For the GOES-N series of satellites, NASA contracted to build and launch the spacecraft. NASA's Launch Services Program at NASA's Kennedy Space Center in Florida supports launches in an advisory role. NOAA manages the GOES program, establishes requirements, provides all funding and distributes environmental satellite data for the United States. Goddard procures and manages the design, development and launch of the satellites for NOAA. The GOES Project is currently preparing for the launch of GOES-P early in 2010, to become GOES-15.

NOAA anticipated the end of GOES-10 several months ahead of time, and began deactivating GOES-10 on December 1 when it fired the spacecraft’s thrusters moving the satellite into a higher orbit above the Earth. On December 2, NOAA finished its third and final, firing putting it safely out of commission and put it in an unused drift orbit. 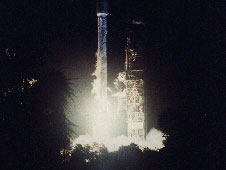 GOES-K, later renamed GOES-10, launched aboard an Atlas I rocket from Pad 36-B at Cape Canaveral Air Force Station on Friday April 25, 1997 at 1:49 a.m. EDT. Credit: NASA
› Larger Image GOES-10 was originally planned for a five-year mission when it was launched in April 1997. It was positioned as NOAA’s GOES-West satellite, more than 22,000 miles above the Earth’s surface. In 2006 a newer satellite, GOES-11, replaced GOES-10. NOAA then repositioned GOES-10 to support hurricane forecasting efforts in South America. NOAA anticipates moving GOES-12 to provide coverage for South America by May 2010.

"GOES-10 has served America – and other nations – admirably and well beyond its expected lifespan," said Mary Kicza, assistant administrator for NOAA’s Satellite and Information Service. "The success of GOES-10, built by Space Systems/Loral, was a credit to a large team of NOAA staff, who acquired and managed the spacecraft and processed and distributed the data to users." Kicza added that with the help of its partners, including NASA, "NOAA is creating better satellites that will provide better data that improve our understanding – and prediction – of climate and weather."

As GOES-West, GOES-10 covered the development of tropical cyclones in the East Pacific near Central America. These storms turn deadly when they curve back over Mexico, or survive the trip to Hawaii. Fortunately, they usually just make waves that surf up onto the beaches of southern California. GOES-10 was pressed into service to take frequent scans of Utah during the 2000 Winter Olympics, to support short-term weather forecasting there.

NOAA has four GOES in orbit: GOES-11 and GOES-12 both of which are operating now. GOES-13 is currently in orbital storage and will replace GOES-12 when it is repositioned; and GOES-14, which NASA launched on June 27, 2009, is undergoing post-launch tests on its way to on-orbit storage.

If GOES satellites were stored on the Earth, they would have to be to be called out of deep storage to replace an on-orbit failure. There would be 9 to 12 months of preparation between call-up and launch, followed by 6 months of post-launch deployment and testing before it could become operational. On-orbit storage reduces this delay from one year to less than one week, and avoids the chance of a launch failure when you can least afford it.

"GOES-10 demonstrated the wisdom of having an on-orbit spare," said Dennis Chesters, GOES Project Scientist at NASA Goddard. "It had to be quickly activated in 1998 to replace GOES-9, just one month after being put into storage."

"It is nice to see that this nation really benefits from the hard work and determination that NASA and NOAA have put into the build and operation of these satellites. GOES 10 lasting 7 years beyond its design life is flat out impressive!" said Andre’ Dress GOES N-P NASA Deputy Project Manager, at NASA Goddard.

NOAA is planning the next-generation GOES-R series, set to begin launching in 2015. GOES-R is expected to double the clarity of today’s GOES imagery and provide at least 20 times more atmospheric observations than current capabilities.