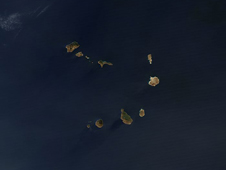 This is a visible image of the Cape Verde Islands on Dec. 12 at 14:45 UTC as seen by the Moderate Resolution Imaging Spectroradiometer that flies aboard NASA's Aqua satellite. Credit: NASA's MODIS Rapid Response Team
› Larger image 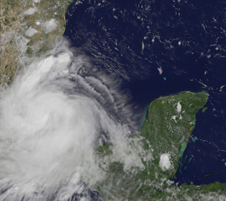 After crashing onto Mexico's Yucatan Peninsula the morning of August 21, the GOES-12 satellite saw Hurricane Dean make a second landfall in Mexico near the town of Tecolutla at about 11:30 a.m. CDT on August 22. Credit: NASA/GOES Project
› Larger image The Cape Verde islands off the western African coast are often mentioned during the Atlantic Hurricane Season, and are known for developing "Cape Verde hurricanes." NASA's Aqua satellite flies over the islands almost daily, and recently captured a stunning visual image of them while directly overhead.

Last month, the Moderate Resolution Imaging Spectroradiometer, or MODIS instrument on NASA's Aqua satellite captured a peaceful looking satellite image of the Cape Verde Islands. As quiet as they appear in the winter, they were active in the summer of 2006 when NASA conducted an airborne hurricane field campaign nearby. That's because the Cape Verde Islands region is important in the formation of some Atlantic Ocean hurricanes.

The NASA African Monsoon Multidisciplinary Activities (NAMMA) experiment included flights of the NASA DC-8 aircraft (based at Cape Verde) along with ground-based radar and other measurements from the islands and Dakar, Senegal, in western Africa. The goal was to study the transition of major convective storms moving off of Africa that had potential to develop into tropical cyclones.

Scott Braun, research meteorologist at NASA's Goddard Space Flight Center, Greenbelt, Md. said, "A particular focus in this experiment was the role of the warm, dry, and dusty Saharan Air Layer (SAL), which some studies have suggested may play a role in storm formation and evolution. There is considerable debate as to whether the SAL acts to aid or prevent storm formation and intensification, and the NAMMA data, combined with a wide variety of NASA satellite products, should help us to address key science questions regarding the SAL’s role."

The Republic of Cape Verde is an island country, spanning an archipelago located in the Macaronesia ecoregion of the North Atlantic Ocean, off the western coast of Africa, opposite Mauritania and Senegal. It is slightly more than 4,000 km² (1,540 square miles) in area with an estimated population of over 500,000. The capital of Cape Verde is Praia. The previously uninhabited islands were discovered in the 15th century and colonized by the Portuguese. They attained independence from Portugal in 1975.

The average Atlantic Hurricane season brings with it approximately two Cape Verde hurricanes. These hurricanes are usually the most intense and the biggest storms of the season because they develop so far to the east and can travel over a large area of warm, open ocean waters that help power them. There are also no land forms in the way to slow tropical cyclones if they form near the Cape Verde Islands.

Cape Verde tropical cyclones also tend to be the longest-lived storms, because of the huge area of open ocean they have to move through. Some have even moved into the Caribbean and Gulf of Mexico.

Hurricane Dean (2007), one of the strongest landfalling hurricanes in the Atlantic, formed just west of the Islands around Aug. 13, moved into the Caribbean on Aug. 17, and made landfall in Belize as a category 5 storm on Aug. 21.