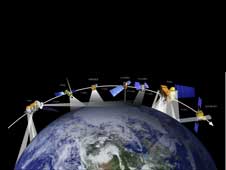 > View larger image
> Print resolution image
This graphic (not to scale) depicts the satellites that make up the Afternoon Constellation -- The “A-Train." Note also that CALIPSO trails CloudSat by only 17.5 seconds to allow for synergy between Aqua, CloudSat, and CALIPSO. Aura, originally positioned 15 minutes behind Aqua, was relocated in May 2008 to enable better coincidence between its Microwave Limb Sounder instrument and CloudSat’s radar instrument. The drawing also depicts the 2 newest members to be added to the A-Train: Glory, a NASA Goddard mission scheduled for launch next year, and GCOM-W1, a JAXA mission scheduled for launch in 2011. Credit: Ed Hanka NASA has several satellites that orbit the Earth one behind the other on the same track. They're called the "A-Train" and one of the things they study is tropical cyclones. There are also other satellites outside the A-Train that are used to study different aspects of tropical cyclones. The satellites that form the A-Train provide unique information about tropical cyclones, the collective term for tropical depressions, tropical storms, hurricanes and typhoons.

"Hurricanes, typhoons and cyclones are both a curse and a blessing for highly populated tropical and subtropical nations, bringing both terrible destruction and life-sustaining rainfall each year," said Bill Patzert, climatologist at NASA's Jet Propulsion Laboratory in Pasadena, Calif. "Many scientists have hypothesized that in the future our warming climate will change hurricane-induced rainfall patterns, perhaps increasing the destructive power of these storms. NASA, NOAA and university scientists are mining the wealth of scientific information from A-Train instruments to improve our understanding of current and future hurricanes. These data will help officials plan for better coastal protection and the most effective public policy."

Each satellite in the A-Train crosses the equator within a few minutes of each another at around 1:30 p.m. local time. By combining the different sets of nearly simultaneous observations, scientists are able to gain a better understanding of important parameters related to climate change. The two primary satellites in the A-Train that contribute to hurricane research are Aqua and CloudSat. The other satellites provide important information about clouds and aerosols that assist with hurricane research.

So why put all of these different satellites in a "train"? By combining the satellites and their data, scientists are able to gain a better understanding of important parameters related to the behavior of hurricanes, in addition to climate change information. The A-Train formation allows for simultaneous coordinated measurements. Data from several different satellites can be used together to obtain comprehensive information about atmospheric components or processes that are happening at the same time. Combining the information collected simultaneously from several sources gives a more complete answer to many questions than would be possible from any one satellite taken alone at different times. 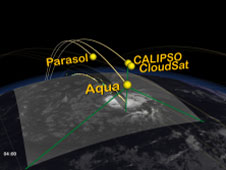 > Click for animation (Windows Media Viewer file)
The A-Train includes Aqua, CloudSat, CALIPSO, Parasol, and Aura. The animation begins showing Earth with moving clouds and with a day/night terminator. Time slows down, and A-train spacecraft orbits are added during a daytime pass. The orbits progress around the globe for 12 hours. During a night time pass the camera zooms into Tropical Storm Debby as the A-Train flies over on August 24, 2006. Data sets from some of the A-train's spacecraft/instruments are shown including Aqua/MODIS, CloudSat, CALIPSO, and Aqua/AIRS.
Credit: NASA/GSFC SVS Aqua

Aqua is designed to acquire precise atmospheric and oceanic measurements to provide a greater understanding of their role in Earth's climate and its variations. There are three instruments that fly on Aqua that are used in tropical cyclone research.

The Advanced Microwave Scanning Radiometer-EOS (AMSR-E) on Aqua was provided by Japan’s Aerospace agency (JAXA). Over the ocean, AMSR-E microwave frequencies probe through smaller cloud particles to measure the microwave emissions from larger raindrops. AMSR-E provides improved measurements of rainfall rates, which is very useful to know as tropical storms approach land or are traveling over land.

Aqua’s Atmospheric Infrared Sounder (AIRS) suite provides visible, infrared and microwave images of tropical storms. AIRS also measures cloud top temperature and pressure and the vertical profile of water vapor. Cloud top temperatures help forecasters recognize deep convective cells. Clouds at different heights are shown in different colors in the infrared satellite images, so that the highest clouds appear purple, and the second highest clouds appear in blue. How does infrared imagery detect how high clouds are in the sky? The coldest ones are higher in the sky (because in the troposphere, the lowest layer of atmosphere where weather happens, temperatures fall the higher up you go until you get to the stratosphere).

In NASA’s infrared imagery, purple clouds are as cold as or colder than 220 Kelvin or minus 63 degrees Fahrenheit (F). The blue colored clouds are about 240 Kelvin, or minus 27F. The colder the clouds are, the higher they are, and the more powerful the thunderstorms are that make up the cyclone.

Because the infrared imagery provides temperature it also indicates how warm the ocean waters are that surround a storm. Warmer temperatures are also false-colored so that an orange color represents temperatures of 80F (300 Kelvin).

CloudSat uses advanced radar to "slice" through clouds to see a unique view of what a tropical cyclone looks like from the side. CloudSat sees structure, composition, and effects of clouds. CloudSat imagery is also false-colored to indicate intensity of the reflected radar energy. CloudSat data also show how high thunderstorms are in tropical cyclones, which is important in intensity forecasting. Higher thunderstorms or "hot towers" indicate a stronger storm. In CloudSat images there are certain things to look for: Blue areas along the top of the clouds indicate cloud ice, while wavy blue lines on the bottom center of the image indicate intense rainfall.

CALIPSO provides new insight into the role that clouds and atmospheric aerosols (airborne particles) play in regulating Earth's weather, climate, and air quality. CALIPSO and Aqua take coincident observations of the change in radiation (energy and heat) in a layer of the atmosphere. CALIPSO and CloudSat are highly complementary and together provide new, never-before-seen 3-D perspectives of how clouds and aerosols form, evolve, and affect weather and climate.

The French satellite PARASOL (Polarization and Anisotropy of Réflectances for Atmospheric Sciences coupled with Observations from a Lidar) works with CALIPSO to improve the characterization of cloud and aerosol microphysical and radiative properties, needed to understand and model the radiative impact of clouds and aerosols. Like CALIPSO, its data are not used directly in hurricane research. PARASOL provides polarized light measurements that allow better characterization of clouds and aerosols in Earth's atmosphere, in particular, distinguishing natural and human-produced aerosols.

Aura, Latin for air, is dedicated to the study of the chemistry andy dynamics of the atmosphere. Aura is designed to produce the first global assessment of tropospheric ozone and observe the protective stratospheric ozone layer. Aura measurements are needed to help solve the mystery of increasing stratospheric water vapor. Relative to tropical cyclones and thunderstorms (convective storms) Aura data are being used to try and answer fundamental climate change questions related to moistening or drying of the upper troposphere as convective activity changes.

NASA uses several other satellites in hurricane research that are not in the A-Train, including the Tropical Rainfall Measuring Mission (TRMM) satellite, Jason-1, OSTM/Jason-2, Landsat-5, Landsat-7, QuikScat, and Terra. NASA also creates images from the National Oceanic and Atmospheric Administration's (NOAA) Geostationary Operational Environmental Satellites (GOES). NASA researches hurricanes and supplies some of the data from these satellites to NOAA, who forecast the storms.

Using all of these satellites and their instruments, NASA scientists gather data on many factors that determine if a tropical cyclone may strengthen or weaken. Data include: storm and surface winds; sea surface heights and temperatures; rainfall intensity and area; lightning; cloud water; water vapor; cloud heights, extent of cloud cover and cloud temperature, humidity, atmospheric pressure; cloud development; and size of the storm.

The satellites that work solo include TRMM and QuikScat. TRMM and QuikScat each provide important data that is used operationally by the National Hurricane Center to assist in their forecasts. TRMM's rainfall estimates within a storm, and imaging of towering clouds known as "hot towers," give hints about a storm's strength and whether it is weakening or strengthening. QuikScat uses microwaves to peer through clouds and obtain wind speeds in tropical cyclones, a critical observation in knowing if a storm is changing strength. Terra and Landsat-7 are members of the Morning Constellation. In the Terra satellite, there is a MODIS instrument like that on Aqua, and there is the Multi-angle Imaging SpectroRadiometer (MISR) instrument that provides global information on cloud heights and cloud motion winds. Landsat provides before and after images of a hurricane's impact onshore. Emergency managers in Louisiana used Landsat imagery after Hurricane Katrina to see areas affected by flooding.

There are also a fleet of GOES satellites in orbit that watch weather in the eastern and western halves of the United States. Currently, GOES-11 watches the U.S. West Coast, and GOES-12 watches the East Coast. The Jason-1 and OSTM/Jason-2 are in interleaved orbits and work with each other to provide complementary data.

A variety of organizations manage the satellites inside and outside of the A-Train: PARASOL is managed by the French Space Agency (CNES). CALIPSO is a joint NASA Langley Research Center/CNES project. Aqua, Aura, Terra, and TRMM are managed by NASA's Goddard Space Flight Center, Greenbelt, Md. CloudSat, QuikScat, and Jason-1 are managed by NASA's Jet Propulsion Laboratory (JPL), Pasadena, Calif. Landsat is a joint U.S. Geological Survey/NASA managed mission. GOES is managed by the National Oceanographic and Atmospheric Administration; NASA Goddard's GOES Project Office generates GOES images and animations. The international OSTM/Jason-2 is managed by a 4-way partnership of CNES, NOAA, NASA/JPL and European Organization for the Exploitation of Meteorological Satellites (EUMETSAT).

The next time a hurricane is brewing anywhere around the world, you can be sure that NASA researchers are going to catch the A-Train.
› Back To Top