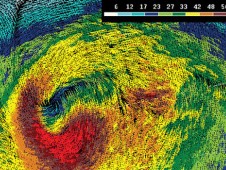 "June is busting out all over," as the song says, and with it, U.S. residents along the Atlantic and Gulf coasts begin to gaze warily toward the ocean, aware that the hurricane season is revving up. In the decade since NASA's QuikScat satellite and its SeaWinds scatterometer launched in June 1999, the satellite has measured the wind speed and wind direction of these powerful storms, providing data that are increasingly used by the National Oceanic and Atmospheric Administration's (NOAA) National Hurricane Center and other world forecasting agencies. The data help scientists detect these storms, understand their wind fields, estimate their intensity and track their movement.

But tropical cyclones aren't the only storms that generate hurricane-force winds. Among others that do is a type of storm that dominates the weather in parts of the United States and other non-tropical regions every fall, winter and into spring: extratropical cyclones.

Scientists have long known that extratropical cyclones (also known as mid-latitude or baroclinic storms) sometimes produce hurricane-force winds. But before QuikScat, hurricane-force extratropical cyclones were thought to be relatively rare. Thanks to QuikScat, we now know that such storms occur much more frequently than previously believed, and the satellite has given forecasters an effective tool for routinely and consistently detecting and forecasting them.

These storms, which occur near busy trans-oceanic shipping lanes, pose a significant threat to life and property for those on the high seas, generating high winds and waves up to 30 meters (100 feet) high. When they make landfall, in areas like Alaska, the Pacific Northwest, New England and the U.S. mid-Atlantic coast, they produce strong winds, high surf, coastal flooding, heavy rains, river flooding and even blizzard conditions.

Take the "Hanukkah Eve" extratropical cyclone of Dec. 14-15, 2006, for example. That storm viciously raked the U.S. Pacific Northwest and British Columbia with torrential rainfall and hurricane-force winds exceeding 87 knots (100 miles per hour) in spots. Dozens of people were injured and 18 people lost their lives, while thousands of trees were downed, power was knocked out for more than 1.5 million residents and structural damage topped $350 million.

Extratropical cyclones occur in both the North Atlantic and North Pacific year-round. Those with hurricane-force winds have been observed from September through May. Their frequency typically begins to increase in October, peaks in December and January, and tapers off sharply after March. They can range from less than 100 kilometers (62 miles) in diameter to more than 4,000 kilometers (nearly 2,500 miles) across. They typically last about five days, but their hurricane-force winds are usually short-lived--just 24 hours or less. Because they can intensify rapidly, they're often referred to as meteorological "bombs." Wind speeds in extratropical cyclones can vary from just 10 or 20 knots (12 to 23 miles per hour) to hurricane-force (greater than 63 knots, or 74 miles per hour). During their development, they can trek along at more than 30 knots (35 miles per hour), but they slow down as they mature. At their seasonal peak, up to eight such storms of varying intensity have been observed at once in both the North Atlantic and North Pacific.

Early work by scientists at NASA, NOAA and other organizations demonstrated the effectiveness of using scatterometers for detecting these powerful and destructive winds. Scatterometers work by sending radar signals to the ocean surface and measuring the strength of the radar signals that bounce back. The higher the wind speed, the more the ocean surface is disturbed, and the stronger the reflection that is bounced back to the satellite.

Among those who pioneered these efforts at NASA was Senior Research Scientist Timothy Liu of NASA's Jet Propulsion Laboratory, Pasadena, Calif., who used data from the NASA Scatterometer, the predecessor to QuikScat, to study the transition of tropical cyclones into extratropical storms in 1997. In addition, Robert Atlas of NASA's Goddard Space Flight Center, Greenbelt, Md., demonstrated that scatterometer data were able to improve predictions of extratropical storm strength and location.

Joe Sienkiewicz, chief of the Ocean Applications Branch at NOAA's Ocean Prediction Center, Camp Springs, Md., says QuikScat data have raised the awareness of forecasters to the occurrence of hurricane-force intensity conditions in extratropical cyclones and have significantly advanced their short-term wind warning and forecast processes.

"QuikScat winds have given forecasters at NOAA's Ocean Prediction Center a high level of situational awareness over the data-sparse waters of the North Atlantic and North Pacific Oceans," he said. "Ocean Prediction Center forecasters daily examine every QuikScat pass and patch of wind and frequently base wind warning and forecast decisions solely on QuikScat winds. Through confidence gained from QuikScat, the National Weather Service began issuing warnings for dangerous hurricane-force winds in extratropical cyclones in December 2000.

"From 10 years of QuikScat, we have learned that hurricane force winds in extratropical cyclones occur more frequently than thought, are most frequent in winter months, and the conditions are most often observed south of the cyclone center," he added.

Over the years, the number of storms observed with hurricane-force winds has steadily increased due to forecasters gaining confidence using the data, and improvements to the QuikScat data. From the fall of 2006 through 2008, NOAA's Ocean Prediction Center identified and issued warnings for 115 separate extratropical cyclones (64 in the Atlantic and 51 in the Pacific) that reached hurricane force.

As confirmed in a 2008 study, QuikScat substantially extends the ability of forecasters to detect hurricane-force wind events in extratropical storms. For the studied case, QuikScat was able to identify more than three-and-a-half times as many hurricane-force events as combined data from the European ASCAT sensor on the METOP-A satellite, directly-measured buoy and ship information, and model predictions.

Another study in 2002 found that incorporating QuikScat data increased the number of wind warnings the Ocean Prediction Center issued for extratropical cyclones by 30 percent in the North Atlantic and by 22 percent in the North Pacific. Between 2003 and 2006, the Ocean Prediction Center's forecasters successfully predicted hurricane-force winds two days in advance 58 percent of the time in the Atlantic and 44 percent in the Pacific. Considering that a successful forecast of hurricane-force winds requires accurate prediction of the timing and intensity of an explosive deepening cyclone, these numbers are impressive.

QuikScat data have been instrumental in the ability to forecast hurricane-force extratropical cyclones several days in advance, while they are still well out over the ocean. Forecasters can use the data to determine which numerical weather prediction models are handling a storm the best, thereby improving the accuracy of forecasts and increasing warning lead times. QuikScat data are available to forecasters within three hours of acquisition.

The availability of a consistent observing capability for extratropical cyclones from QuikScat has allowed NOAA to add a third "hurricane-force" warning category for extratropical cyclone winds, in addition to gale and storm, providing better warnings of a coming storm's severity. The U.S. Coast Guard broadcasts these warnings by radiofax, and they are posted online at: http://www.opc.ncep.noaa.gov .

A Boon to Shipping

These extratropical cyclone warnings have a great economic impact on the $200 billion global marine shipping industry. A recent study estimates improvements to warning and forecast services due to QuikScat save the container and bulk shipping industry $135 million a year by reducing their exposure to hurricane-force wind conditions in non-tropical storms over the North Pacific and North Atlantic. Without QuikScat, the severity of many extratropical cyclones would not be determined. The data are also vital to the fishing industry, offshore energy industries, search and rescue organizations, and agencies that track and manage marine hazards like oil spills.

"The 10 years of observations from the QuikScat mission have provided critical information for the monitoring, modeling, forecasting and research of the atmosphere, oceans and climate," he said.