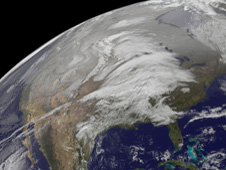 The Geostationary Operational Environmental Satellite (GOES) series of satellites are operated by the National Oceanic and Atmospheric Administration. NASA's GOES Project, located at NASA's Goddard Space Flight Center, Greenbelt, Md. creates some of the satellite images and animations from the GOES satellites.

The GOES-13 satellite captured an image of North America on Wednesday, November 24 at 1445 UTC (9:45 a.m. EST) showing a large area of cloud cover stretching from the Gulf coast north into the upper Midwest. That cloud cover is associated with a warm front that stretches from the Tennessee Valley west to Kansas where an associated low pressure area is located.

Residents the in the Tennessee and Ohio valleys can expect rain from that system, and severe storms are possible in Missouri, northern Arkansas and eastern Kansas and eastern Oklahoma today.

Ahead of the large blanket of cloud cover, high pressure is currently keeping the U.S. east coast in sunshine, but that will change as the clouds track east by Thanksgiving Day.

Behind the blanket of cloud cover appears to be a long line of clouds from south to north that resembles an exclamation mark. Those are clouds associated with a front that's bringing snow to Minnesota, the Dakotas, western Montana, Wyoming, Colorado, northern Arizona and eastern Utah today. Snows in North Dakota and the Colorado Rockies may be heavy.

To the west of that line of clouds there is a high pressure system centered over northern Nevada which will bring mostly clear conditions to Washington, Oregon, Idaho, Nevada, and California.

Wherever Thanksgiving travelers go, so go the GOES satellites keeping an eye on the weather.

Hurricane season ends on November 30 for the Atlantic and Eastern Pacific Ocean.