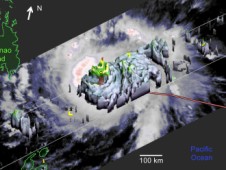 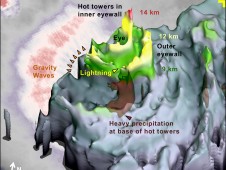 › View larger image
Caption: NASA TRMM satellite visualized Typhoon Bopha in 3-D as it moved through the western North Pacific Ocean. TRMM radar saw a double eyewall, two concentric rings of intensity storm cells exceeding a 12 km (7.4 miles) altitude. Yellows and greens indicate locations inside of the typhoon's clouds where updrafts were lifting precipitation-size ice between 9 and 12 km (5.5 and 7.4 miles) above the ocean.
Credit: NASA/Owen Kelley NASA's Tropical Rainfall Measuring Mission (TRMM) satellite observed the eyewall of Super-typhoon Bopha in 3-D shortly before noon on Monday, Dec. 3, 2012 (Philippines local time). At that time, Bopha was at category 3 and had begun rapidly intensifying to category 5 prior to landfall in the pre-dawn hours the next morning. Bopha made landfall in the Philippines, on the island of Mindanao.

"This close to landfall, the TRMM satellite saw what could only be described as the 'full catastrophe' in terms of the eyewall indicators of a potentially destructive tropical cyclone," said Owen Kelley of the TRMM science team at NASA's Goddard Space Flight Center, Greenbelt, Md.

For starters, the TRMM radar saw two hot towers simultaneously reaching a 15.5 km (9.6 mile) altitude on the northeast side of the eyewall where the storm's forward motion is added to the counter-clockwise winds circling under the eyewall. TRMM studies have suggested that even a single hot tower exceeding a 14.5 km (9 mile) height may be sufficient to indicate intensification is on-going. At the base of the hot towers, radar reflectivity exceeded 45 dBZ indicating heavy rainfall (as shown in deep red in the image).

Second, the TRMM radar saw a double eyewall, two concentric rings of intensity storm cells exceeding a 12 km (7.4 miles) altitude. Yellows and greens indicate locations inside of the typhoon's clouds where updrafts were lifting precipitation-size ice between 9 and 12 km (5.5 and 7.4 miles) above the ocean. Concentric eyewalls are generally evidence of an eyewall replacement cycle, which can be associated rapid intensification.

While most of the best tropical-cyclone-observing instruments are passive microwave instruments which give altitude-integrated images with somewhat "fuzzy" horizontal resolution, the TRMM radar is even better. The TRMM radar is like a high-definition camera with a flash that reveals vertical structure. The TRMM radar has 5 km (3.1 mile) horizontal resolution and 250 meter(820 foot) vertical resolution, which clearly resolved the structure within the storm clouds that contains raindrops and ice large enough to fall out of clouds. In this case, the TRMM radar revealed that the inner eyewall had only a ~20 km (12.4 mile) radius, which is smaller than the average tropical cyclone.

The small inner radius of the inner eyewall is the third feature that indicates Super-typhoon Bopha's fearsome potential. A compact eyewall means that the typhoon's eye contains only a relatively small volume of air that would need to be heated in order to lower the storm's ocean-surface central pressure, which in turn, would make is easier to increase the speed of the circling surface winds that determine the storm's "headline" intensity.

Fourth, the TRMM Lightning Imaging system (LIS) saw two lightning flashes in the inner edge of one of the eyewall hot towers. Lightning flashes are relatively rare in eyewalls, even in the eyewalls of intensifying tropical cyclones. Lightning tends to occur where updrafts are strong enough to suspend in mid-air a mix of supercooled water and grauple or hail-sized chunks of ice. Such large chunks of ice can only form when updrafts repeatedly "bob" ice particles up and down through a lower cloud layer with liquid water droplets and then a higher cloud layer cold enough to promote freezing.

In addition to lightning, radar, and passive microwave observations, the TRMM satellite also simultaneously observes cloud-top temperatures, which provide a fifth indicator that the inner-core energy-conversion machinery of Super-typhoon Bopha was working in overdrive. Specifically, the coldest cloud tops were observed with extremely cold temperatures below -90C (-130F), which indicates Bopha was extracting a great deal of energy from the ocean surface and converting it into kinetic energy of strong updrafts that where punching through the troposphere (the bottom layer of the atmosphere that usually contains weather) and into the transition zone between troposphere and stratosphere.

As a bonus, the TRMM-observed cloud-top temperatures clearly illustrate how the circling winds of the tropical cyclone can act as a "containment vessel" preventing at least some of the energy released in hot towers from rapidly dissipating harmlessly far from the cyclone's inner core. Specifically, the cloud-top temperatures show gravity waves propagating around the eyewall instead of spreading away from the inner core like ripples in a pond. The observed gravity waves have their wave crests perpendicular to their direction of motion and the wave crests are seen to be oriented radially, i.e., perpendicular to the wind circling the eye. The gravity waves are seen in the upper left of the image as alternating bands of gray and pink.

For a reason other than the details revealed by TRMM, Super-typhoon Bopha is impressive. Conventional wisdom has it that tropical cyclones can only form at least 5 or 8 degrees of latitude away from the Equator, while some studies suggest that this rule of thumb is dangerous oversimplification (Brunt, 1969, Australian Meteorological Magazine). Tropical Cyclone Bopha has just broken this rule, with the TRMM satellite radar catching Bopha in the act of rapidly intensifying from category 3 to category 5 when approximately 6 degrees north of the Equator. At the time of this writing, the scope of the damage and the total number of fatalities from Bopha are unknown.

Bopha is designated a super-typhoon because it formed in the West Pacific (hence the "typhoon" nickname) and because it reached major cyclone status, or category 3 on the Saffir-Simpson scale (hence the "super" designation).

A joint mission between the United States and Japan, the TRMM satellite has just passed the 15th anniversary of its launch. An advantage of an extended mission such as this one is that it increases the chances of observing rare and poorly understood events, such Bopha, a category 5 tropical cyclone close to the Equator. The physical mechanisms contributing to such an event will take scientists time to unravel.