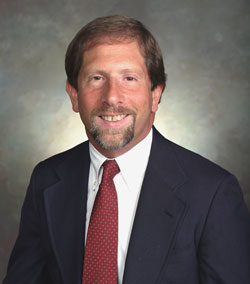 In July 2005, Goodman went to San Jose, Costa Rica, with a team of hurricane hunters from NASA, the National Oceanic and Atmospheric Administration, and 10 American universities for the month-long Tropical Cloud Systems and Processes (TCSP) mission. Primarily intended to permit detailed study of cyclogenesis, or the birth of tropical storms that can form hurricanes, the mission tracked two major Atlantic Ocean hurricanes at the height of their power, witnessed the entire lifecycle of another tropical storm, and with Goodman’s support documented unprecedented real-time data throughout.

Goodman served as principal investigator for the field study’s data management system – a Web-driven, real-time data delivery system supporting the collection and dissemination of mission information, from the planning phase and field operations to post-experiment data analysis. The system, designed by Goodman and NSSTC researchers from the University of Alabama in Huntsville, provided field scientists, program and project managers, atmospheric researchers and computer modelers with timely access to surface and aircraft instrument data, key satellite observations, forecasts and other vital information.

In 1998 and in 2001, Goodman’s data management team also provided support for the TCSP mission's predecessor, the successful Convection and Moisture Experiment, or CAMEX, research series conducted by NASA and NOAA to study the lifecycle and behavior of Atlantic hurricanes.

Prior to the TCSP mission, Goodman, who joined NASA in 1989, held a year-long Earth science program development post at NASA Headquarters in Washington. From 1998 to 2004, he managed a series of NASA Earth science data centers at the Marshall Center and the NSSTC, collating and disseminating data from NASA satellites and other research instruments.

A native of Arlington, Va., Goodman earned a bachelor's degree in environmental science in 1978 at the University of Virginia in Charlottesville. He received a master's degree in meteorology in 1980 from Florida State University in Tallahassee. He is the author or co-author of 10 research publications.

Goodman is married to Robbie Hood of Neosho, Mo., also an atmospheric scientist at the Marshall Center and one of three mission leads during the TCSP mission to Costa Rica. Goodman and Hood reside in Madison, Ala., with their three children.