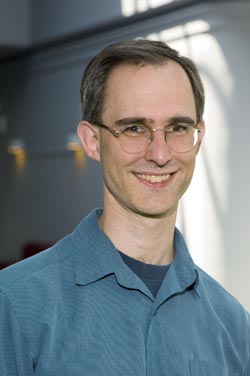 Dr. Scott A. Braun is a research meteorologist at NASA's Goddard Space Flight Center in Greenbelt, Md. and studies hurricanes from the inside out. To do so, Scott is an expert at using computer modeling to recreate the components of hurricanes, including winds, rainfall and in-cloud heating.

Scott has a doctorate in atmospheric sciences from the University of Washington, Seattle, and a bachelor's degree in science, with a concentration in meteorology from the San Francisco State University.

Scott was a research assistant at the University of Washington in Seattle, Wash.; a Postdoctoral Fellow at the National Center for Atmospheric Research (NCAR) in Boulder, Colo.; and has worked at Goddard since 1997.

Computer modeling of hurricanes is the foundation of hurricane forecasts, so Scott is a valuable resource to all of NASA and others studying hurricanes.

Scott's expertise in the computer modeling field includes using the NCAR Mesoscale Model Version 5 (MM5) and Weather Research and Forecast (WRF) mesoscale models, and the NASA Goddard Cumulus Ensemble Model. The latter simulates convective systems like thunderstorms, squall lines and hurricanes. Scott is also experienced in the physical and dynamic processes in hurricanes; in how frontal systems interact with coastal mountainous areas; in analysis of data from Doppler radars both on the ground and airborne; in evaluation of ice formation processes in clouds such as thunderstorms; and in analyzing data on a variety of weather systems ranging in scale from a few miles to several thousand miles.

His research on hurricanes focuses on the processes that impact the formation, intensification, movement, structure, and precipitation organization of hurricanes. The modeling work supports NASA programs that have major hurricane components such as the Convection and Moisture Experiments (CAMEX-3 in 1998 and CAMEX-4 in 2001) and the Tropical Cloud Systems and Processes (TCSP) experiment planned for the summer of 2005. It also supports research related to observations of precipitation in hurricanes from the Tropical Rainfall Measuring Mission (TRMM) satellite by examining processes that control the amount and organization of precipitation in these storms.

Scott studied the effects of vertical wind shear (a rapid change in wind speed or direction with height) on hurricanes using the MM5 Forecast model to simulate 1998's Hurricane Bonnie and 2001's Hurricane Erin. Scott also noticed that the vortex (the swirling wind area) of the hurricane tilted when there was wind shear.

Scott studied the winds and updrafts near the hurricane's eye to learn more about how they change in space and time. An MM5 simulation of Hurricane Bonnie (1998) suggests that the timing and location of individual updrafts that produce the rainfall (often concentrated on very small-scales) are controlled by intense, small-scale regions of rapidly swirling flow in the eyewall.

Scott has received numerous awards including several scientific research awards at Goddard, and a group achievement award for participating in NASA's CAMEX-4 mission. He's also a member of the American Meteorological Society, of which he received a scholarship while at San Francisco State University.

He's also served as a radar operator on the NOAA WP-3D Orion aircraft, and dropped sensors into the heart of hurricanes during the CAMEX-3 mission in 1998. He's worked on proposals for NASA's Aqua, Terra and ACRIM satellites, flown on two CAMEX missions, and is participating in the upcoming TCSP mission. 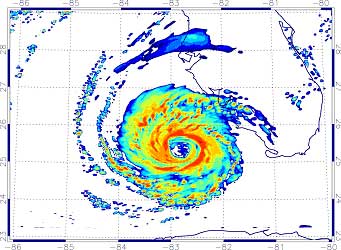 Image to right: Simulated radar reflectivity for a simulation of Hurricane Charley as it approached the west coast of Florida on August 13, 2004. The figure was generated from the 2-km grid of a simulation using the WRF model. Credit: NASA 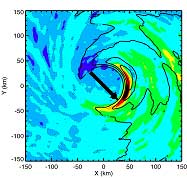 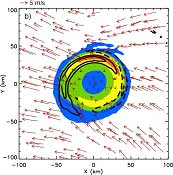 Image left: The 6-hour average vertical motion (colors) and total precipitation hydrometeors (contours) at 5 km altitude. The arrow indicates the direction of vertical wind shear. The upward motion occurs in the downshear direction while the precipitation is to the left of the shear. Image right: The 6-hour average vorticity (colors), divergence (contours), and asymmetric flow vectors at 1 km altitude showing that convergence (divergence) occurs where the relative flow is directed into (out of) the eyewall. Credit: NASA 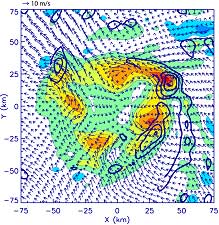