Cyclone Sandra is fading in the South Pacific Ocean and a recent image from NASA's Terra satellite shows that wind shear has stretched the storm from east to west.

When a storm elongates and is no longer circular it weakens, and Cyclone Sandra has stretched out as a result of moving into an area of stronger wind shear.

The MODIS instrument aboard NASA's Terra satellite captured an infrared image of Cyclone Sandra on March 14 at 1146 UTC (7:46 a.m. EDT) the showed the remaining thunderstorms in the system were over the "right front quadrant" according to the Joint Typhoon Warning Center. Satellite imagery also showed that stratocumulus cloud fiends were streaming in from the east. Stratocumulus clouds indicate that there is stable air moving into the low pressure area, which would prevent rising air and the formation of thunderstorms (which make up a tropical cyclone).

On March 13 at 0300 UTC, the Joint Typhoon Warning Center issued their final bulletin on Sandra. At that time, Sandra's maximum sustained winds were near 40 knots (46 mph/74 kph) and weakening. Sandra was located about 465 nautical miles south-southwest of Noumea, New Caledonia, near 29.1 south and 162.1 east. Sandra continues to weaken as it moves south at 20 knots (23.0 mph/37.4 kph) and is expected to dissipate in another day. 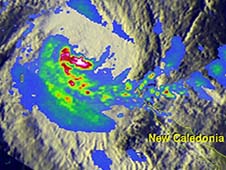 On March 11, 2013, NASA's TRMM satellite twice flew above weakening tropical cyclone Sandra as it was passing to the west of New Caledonia in the southern Pacific Ocean. TRMM's Precipitation Radar (PR) had a very good view of Sandra as it passed directly above the tropical cyclone on March 11 at 1312 UTC (9:12 a.m. EST). TRMM PR measured rainfall at the extreme rate of over 206 mm (~8 inches) per hour in an area southwest of Sandra's eye. Those TRMM PR data also showed that very little rain was occurring north of the weakening tropical cyclone's eye.

New Caledonia escaped the heaviest precipitation as the center of Sandra remained off-shore.

Sandra is moving into an area of high vertical wind shear and colder sea surface temperatures that are expected to make the storm transform into a cold-core system before it dissipates over the next couple of days. 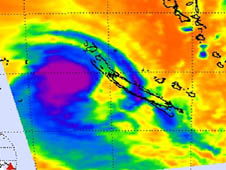 › Larger image
This infrared image of Cyclone Sandra was taken by the AIRS instrument aboard NASA's Aqua satellite on March 12 at 0235 UTC. The most powerful thunderstorms (purple) and heaviest rainfall appeared over the ocean. Credit: NASA JPL, Ed Olsen

Dry air wrapping around the northern and western quadrants of Cyclone Sandra are sapping its strength. NASA's Aqua satellite passed over Sandra and captured infrared imagery of the storm as it continues moving past New Caledonia.

An infrared image of Cyclone Sandra was taken by the AIRS (Atmospheric Infrared Sounder) instrument aboard NASA's Aqua satellite on March 12 at 0235 UTC. The infrared image showed that the most powerful thunderstorms and heaviest rainfall appeared over the ocean and west of the island. Cloud top temperatures were as cold as -63F (-52C) in the strongest thunderstorms. The AIRS data also revealed a band of strong thunderstorms east of the center that extended from central to northern New Caledonia.

Infrared satellite imagery on March 13 revealed that the bands of thunderstorms wrapping around Sandra's center had become disorganized. Sandra is encountering increasing vertical wind shear and cooler sea surface temperatures. The western and northern sides of the storm are also being impacted by dry air, which is sapping the moisture and limiting thunderstorm development.

At 1609 UTC (12:09 p.m. EST), Sandra continued to pull away from New Caledonia, and the Airport at Promenade Pierre Vernier, Noumea, reported a light misty rain with sustained winds from the east- northeast at 8.7 knots (10 mph/16.1 kph).

Sandra is expected to begin transitioning into an extra-tropical cyclone in the next two days as it moves farther south. 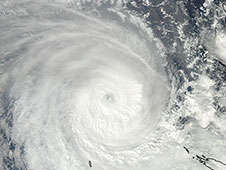 Aqua passed over Cyclone Sandra on March 10 at 0247 UTC and again at 23:10 UTC (7:10 p.m. EDT). Both times, the MODIS and AIRS instruments aboard captured visible and infrared images, respectively, of the storm.

The Atmospheric Infrared Sounder (AIRS) instrument aboard NASA's Aqua satellite provided scientists with an infrared look at Cyclone Sandra's cloud top temperatures on March 10 at 0247 UTC (March 9 at 10:47 p.m. EDT). The strongest thunderstorms circled the center of the eye, which was visible at that time. Infrared imagery showed that the strong thunderstorms had cloud top temperatures of -63F (-52C). Cloud tops that cold indicate powerful, high thunderstorms with the potential to drop heavy rainfall.

By March 14, Sandra is expected to transition into an extra-tropical storm and weaken over cooler and open waters of the Southern Pacific Ocean. 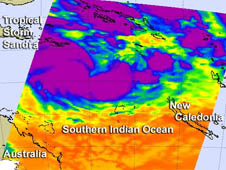 Cyclone 19P in the Southern Pacific Ocean was renamed Sandra today, March 8, as NASA's Aqua satellite captured infrared data on the storm that indicated it would continue to strengthen. Residents of New Caledonia should prepare for impacts from Sandra early next week.

The Atmospheric Infrared Sounder (AIRS) instrument that flies aboard NASA's Aqua satellite captured an infrared image of Cyclone Sandra's cloud top temperatures on March 8 at 1717 UTC (12:17 p.m. EST). Strong thunderstorms around Sandra's center and in a band east of the center appeared as cold as -63 Fahrenheit (-52 Celsius), and are indicative of heavy rainfall.

Satellite imagery also showed central convection deepened (strengthened) over the storm's center since the previous day, indicating that Sandra is in a mode of strengthening.

Data from the Special Sensor Microwave Imager/Sounder (SSMIS) satellite instrument indicated an eye feature developing in Sandra early on March 8. Data from the SSMI is collected under the Defense Meteorological Satellite Program, which is a Department of Defense program responsible for designing, building, launching, and operating polar-orbiting environmental satellites.

Forecasters at the Joint Typhoon Warning Center noted on their update on March 8 that all environmental factors indicate that Sandra will continue to intensify over the next three days before weakening. Sandra is expected to pass west of New Caledonia on March 12, and bring heavy rain, possible flooding, strong winds and rough surf. 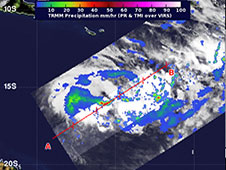 NASA's TRMM satellite captured a look at the rainfall rates within low pressure System 92P on March 7 at 0023 UTC (March 6 at 7:23 p.m. EST), just hours before it became Tropical Cyclone 19P (TC 19P). TRMM data indicated that heavy rain was falling at a rate of 2 inches/50 mm per hour around the center of circulation, and that some of the thunderstorms were powerful as they topped heights of 9.3 miles (15 kilometers). Bands of thunderstorms around the storm expanded, strengthened and wrapped tighter around the storm's center today, March 7, according to the Joint Typhoon Warning Center (JTWC).