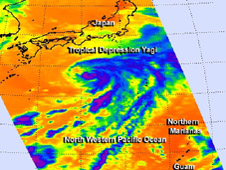 › Larger image
This infrared image of Tropical Depression Yagi was taken from the AIRS instrument aboard NASA’s Aqua satellite on June 11 at 12:05 a.m. EDT. The areas with the coldest cloud top temperatures and strongest thunderstorms (purple) were near -63F/-52C around the center and eastern quadrant of the storm. Those very cold cloud temperatures are indicative of heavy rainfall. Credit: NASA JPL/Ed Olsen NASA Finds Tropical Depression Yagi’s Strongest Side, Now Waning

Infrared imagery from NASA’s Aqua satellite on June 11 showed that Tropical Depression Yagi’s strongest quadrant was east of its center. However, since them the storm has weakened after running into an upper-level low pressure area and cooler waters.

When NASA’s Aqua satellite passed over Yagi on June 11 it was a tropical storm with strong thunderstorms on its eastern side. An infrared image of the storm was taken from the Atmospheric Infrared Sounder (AIRS) instrument aboard NASA’s Aqua satellite on June 11 at 12:05 a.m. EDT. The areas with the coldest cloud top temperatures and strongest thunderstorms were near -63F/-52C around the center and indicative of heavy rainfall.

Since June 11, an upper-level low pressure area from the north of Yagi has moved closer to the storm’s center, suppressing thunderstorm development. Animated infrared satellite imagery showed that the storm’s low-level center is now fully exposed to outside winds and has elongated. Whenever a storm loses its circulation and becomes elongated it weakens (like a tire going flat that can’t spin properly). There is no recognizable convection (rising air that forms thunderstorms that make up the tropical cyclone) around the storm’s center.

On June 12 at 1500 UTC (11 a.m. EDT) Tropical depression Yagi was spinning down in the northwestern Pacific Ocean. Yagi’s maximum sustained winds were down to 30 knots. It was centered near 31.2 north latitude and 138.9 east longitude, about 250 miles south of Yokosuka, Japan. Yagi is moving to the east-northeast at 8 knots.

According to the Joint Typhoon Warning Center (JTWC), the organization that forecasts storms in the northwestern Pacific, Yagi was still a “weakly symmetric warm-core system,” but it is expected to become a cold-core low pressure area by the end of June 12. JTWC forecasters expect Yagi to dissipate by June 13. 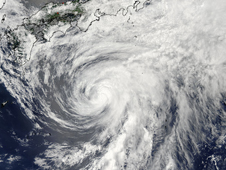 Tropical Storm Yagi is not expected to make landfall in Japan, but NASA satellite imagery showed that the storm was just south of the big island.

NASA’s Aqua satellite passed over Tropical Storm Yagi on Tuesday, June 11 at 04:10 UTC (12:10 a.m. EDT/1:10 p.m. Japan local time) and the Moderate Resolution Imaging Spectroradiometer or MODIS instrument captured a visible image of the storm. The image showed that clouds associated with the northern fringes of the storm were draped over southeastern coastal Japan.

The MODIS image also revealed that Yagi has a long “tail” or band of thunderstorms feeding into the center from the south.

Multispectral satellite imagery shows tight bands of thunderstorms wrapping into the center of the storm, although the building of thunderstorms continues to weaken around the center. Vertical wind shear is starting to take a toll on Yagi, according to the Joint Typhoon Warning Center. Northwesterly wind shear has made a slight tilt to the system with the upper-level center displaced about 20 nautical miles east of the low-level center. When the lower and upper level centers of circulation are not “stacked,” a tropical cyclone begins weakening.

At 09:00 UTC (5 a.m. EDT/6 p.m. Japan local time) Yagi had maximum sustained winds near 50 knots. Tropical storm force winds extend out 95 miles from the center, making the storm about 200 miles wide. Yagi was centered near 29.2 north and 136.9 east, about 307 miles west-northwest of Chichi Jima, Japan. Yagi was moving to the north-northeast at 17 knots. Yagi is kicking up seas with wave heights topping 21 feet, so the southeastern coast of Japan can expect rough seas until Yagi passes by.

Yagi is forecast to turn to the southeast and move away from Japan over the next couple of days, where it is expected to weaken and dissipate. 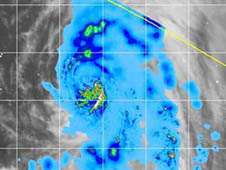 › Larger image
NASA’s TRMM satellite captured the rate rain was falling within Tropical Storm Yagi on June 10 at 8:19 a.m. EDT. The heaviest rain was falling around the center of circulation at as much as 1.2 inches per hour. TRMM data was overlaid on infrared cloud imagery from the MTSAT-2 satellite. Credit: NASA/NRL NASA Sees Tropical Storm Yagi Spinning in Western Pacific Ocean

Tropical Storm Yagi developed over the weekend of June 8 and 9 in the Western North Pacific from Tropical Depression 03W and NASA satellites captured the storm coming together. NASA’s TRMM satellite measured rainfall rates within the storm and found the heaviest rain falling mostly south of the center.

NASA and the Japanese Space Agency’s Tropical Rainfall Measuring Mission or TRMM satellite captured the rate rain was falling within Tropical Storm Yagi on June 10 at 8:19 a.m. EDT. The heaviest rain was falling south of the center around the center of circulation at as much as 1.2 inches (30.4 mm) per hour.

To the north of Yagi, vertical wind shear is moderate (between 15 and 20 knots/17.2 and 23.0/ 27.7 and 37.0 kph), and wind shear inhibits development of thunderstorms. Wind shear is a measure of how the speed and direction of winds change with altitude. Water vapor imagery shows that there is sinking air (subsidence) along the western edge of the storm, which is also inhibiting the development of thunderstorms.

Sea surface temperatures remain warm enough to support Yagi, so the storm is expected to maintain strength for the next 24 hours as it moves northeast. Yagi is expected to dissipate south of Japan sometime before June 14.