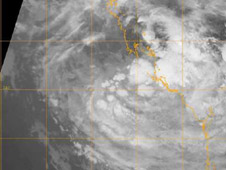 Ex-tropical cyclone Oswald doesn't know when to stop causing problems for Queensland, Australia, and now teamed up with a low pressure area, it continues to bring heavy rainfall. NASA's Aqua satellite passed over the remnants and saw Oswald hugging the southeastern Queensland coast.

Oswald has dropped a lot of rainfall throughout Queensland. An earlier rainfall analysis using NASA's TRMM satellite data showed Oswald and its remnants had dropped over 600 mm (~23.6 inches) of rain in areas of the Cape York Peninsula near the Gulf of Carpentaria. Higher rainfall totals have been recorded over the southern Capricornia district.

NASA's Aqua satellite passed over Oswald's remnants on Jan. 25 at 1458 UTC (9:58 a.m. ES/U.S.) and the Moderate Resolution Imaging Spectroradiometer (MODIS) instrument aboard captured an infrared image of the storm. At the time, Oswald's maximum sustained winds were near 25 knots (28.7 mph/46.3 kph), and minimum central pressure was near 995 millibars. At the time Aqua passed over some of the strongest storms and heaviest rainfall appeared west and east of Yeppoon and over Hervey Bay.

According to the Australian Bureau of Meteorology (ABM), on Jan. 25 at 2 p.m. EST, the heaviest rainfall was occurring over the southern Capricornia district. ABM noted that rainfall in excess of 27.5 inches (700 mm) in less than 2 days, leading to rapid river and stream rises in the area. 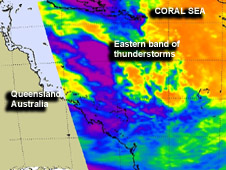 Infrared imagery from NASA's Aqua satellite revealed that a band of thunderstorms on the eastern side of Tropical Storm Oswald's remnants still contained some punch. Oswald's remnants have triggered severe weather warnings in parts of Queensland, Australia.

When NASA's Aqua satellite passed over the eastern side of the remnants of Tropical Cyclone Oswald the Atmospheric Infrared Sounder (AIRS) instrument captured an infrared image of a powerful band of thunderstorms over the Coral Sea. The band of thunderstorms east of Oswald's center showed some strong convection and cold cloud top temperatures as cold as -63 Fahrenheit (-52 Celsius). Those cold temperatures are indicative of high, powerful thunderstorms capable of dropping heavy rainfall.

Other satellite imagery indicated that Oswald's low-level circulation center had become well-defined, and bands of thunderstorms continued to wrap into it from the Coral Sea. The center of the low was over land and was out of the range of the satellite overpass, but also contained strong storms. Those storms are responsible for severe weather warnings issued on Jan. 24 by the Australian Bureau of Meteorology (ABM).

At 1:15 a.m. local time (Queensland) on Friday, Jan. 25 (1515 UTC or 10:15 a.m. EST/U.S. Jan. 24), the ABM issued a severe weather warning that included destructive winds and heavy rainfall for Capricornia, Wide Bay and Burnett and parts of the Central Coast and Whitsundays, Central Highlands and Coalfields and Southeast Coast Forecast Districts.

ABM's bulletin noted that ex-Tropical Cyclone Oswald was located over land, approximately 93.2 miles (150 km) west-northwest of Mackay and moving south-southeast at about 12.4 mph (20 kph). ABM noted that strong winds gusting to 77.7 mph (125 kph) are possible about the Central Coast-Whitsundays and Capricornia districts, while wind gusts to 56 mph (90 kph) are possible over the Wide Bay and Burnett district, including areas between Agnes Water and Sandy Cape.

Oswald's remnants continue to generate heavy rainfall, and a warning for flash flooding is also in effect. At 1 a.m. local time (Queensland) on Friday, Jan. 25 (1500 UTC or 10 a.m. EST/U.S. Jan. 24), the Yeppoon area reported almost 8 inches (198 mm) of rain had fallen since the previous day, and severe flash flooding was occurring. For updated watches and warnings from ABM, visit: http://www.bom.gov.au/qld/warnings/

The Joint Typhoon Warning Center noted that Oswald has a medium chance for regaining tropical depression status over the next day. 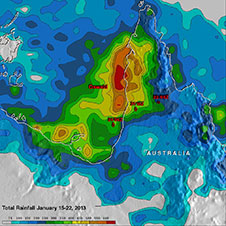 › Larger image
This TRMM satellite rainfall analysis covers the period from January 15 to 22, 2013. The analysis showed that Oswald and its remnants have already dropped over 600 mm (~23.6 inches) of rain in areas of the Cape York Peninsula near the Gulf of Carpentaria. Credit: NASA/SSAI, Hal Pierce NASA Sees Massive Rainfall Totals from Tropical Storm Oswald >

Tropical cyclone Oswald's sustained winds have never been greater than 35 knots (~40.2 mph) but the storm's extreme rainfall has resulted in widespread flooding in Australia over northern Queensland. Many roads have been reported flooded resulting in some communities being cut off.

NASA's Tropical Rainfall Measuring Mission (TRMM) is a satellite that can measure rainfall from space. TRMM-based satellite precipitation estimates are created at NASA's Goddard Space Flight Center in Greenbelt, Md. within about seven hours of observation time. Hal Pierce of NASA Goddard created a rainfall image from a Multi-satellite Precipitation Analysis (MPA) for the period from January 15 to 22, 2013. The analysis showed that Oswald and its remnants had dropped over 600 mm (~23.6 inches) of rain in areas of the Cape York Peninsula near the Gulf of Carpentaria.

According to a report on news.com.au, travelers were requested to cancel plans to go to the Cape York Peninsula, Queensland. Many rivers have flooded and dirt roads are mired in mud over a distance of 560 kilometers (348 miles) that stretch from Laura to Bamaga. Rainfall totals over the Cape York Peninsula to Cardwell were as high as 200mm (7.8 inches) to 300 mm (11.8 inches), which fell south of the town of Innisfail. 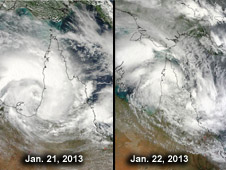 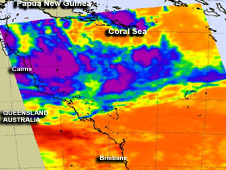 NASA's Aqua satellite documented the formation of Tropical Storm Oswald in the Gulf of Carpentaria on Jan. 21 and the landfall on Jan. 22 in the southwestern Cape York Peninsula of Queenstown, Australia. Oswald has since become remnant low pressure area over land.

Tropical Storm Oswald was hugging the southwestern coast of the Cape York Peninsula, Queensland, Australia when NASA's Aqua satellite first flew overhead on Jan. 21 at 0430 UTC (Jan. 20 at 11:30 p.m. EST). The Moderate Resolution Imaging Spectroradiometer (MODIS) instrument aboard NASA's Aqua satellite captured a visible image of the storm that showed tight bands of thunderstorms. Those bands weakened the next day when MODIS captured a second visible image of the storm. At that time, Oswald's eastern quadrant was over land.

NASA also captured an infrared image of Tropical Storm Oswald on Jan. 22 at 0329 UTC with the Atmospheric Infrared Sounder (AIRS) instrument that also flies aboard NASA's Aqua satellite. AIRS data revealed cold cloud tops and strong storms associated with Oswald and a nearby monsoonal trough (elongated area of low pressure) stretched from Cairns north to Cooktown, and over Cape Melville and Lakefield National Parks on the eastern Cape York Peninsula.

At 0600 UTC (1 a.m. EST/U.S.) on Jan. 22, Oswald was downgraded to a remnant low pressure area. The center of circulation was located near 5.0 south latitude and 142.3 east longitude, about 185 nautical miles (213 miles/342.6 km) east-northeast of Mornington Island, Australia, and over the Cape York Peninsula. Infrared satellite data at that time showed the strongest storms were located in the northwestern quadrant. An image from NASA's Tropical Rainfall Measuring Mission (TRMM) satellite on Jan. 22 showed that the low-level center was now stretched across the Cape York Peninsula.

ABM forecasts damaging winds, with gusts to 90 kph (56 mph) with showers and thunderstorms across Cape York Peninsula north of Cooktown. Locations which may be affected include Aurukun, Weipa, Torres Strait Islands, Lockhart River, Coen and Cooktown. Heavy rainfall is likely throughout the Peninsula district, coastal parts of the North Tropical Coast and Tablelands district, and coastal parts of the Herbert and Lower Burdekin district north of about Ayr. The heavy rainfall may also lead to flash flooding. For more information: http://www.bom.gov.au/cyclone/.

Forecasters expect Oswald to linger over the Cape York Peninsula and the Joint Typhoon Warning Center expects Oswald's remnants to continue tracking over land to the southeast.