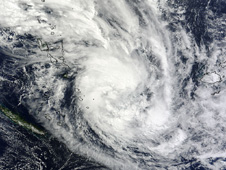 Tropical Storm Daphne was born on April Fool's Day in the southwestern Pacific Ocean, as low pressure System 95P consolidated and organized. NASA's Terra satellite passed over Daphne after the storm was named. Daphne had already caused severe flooding in areas of Fiji.

The Moderate Resolution Imaging Spectroradiometer (MODIS) instrument on NASA's Terra satellite captured a visible image of Tropical Cyclone Daphne when it was over the North Fiji Basin on April 1, 2012 at 2300 UTC (7 p.m. EDT).

Before Daphne had even become a tropical storm, warnings were in force throughout Fiji. The Fiji Meteorological Service noted today, April 2, that a gale warning remains in force for Viti Levu, Yasawa And Mamanuca Group, Southern Lau Group, Kadavu and Nearby Smaller Islands. Strong wind warnings are up for the other Fiji islands. In addition, a severe flood warning is in effect for all major rivers, streams and low-lying areas of Viti Levu. For additional warning information, visit: http://www.met.gov.fj/aifs_prods/20020.txt.

Sky news reported four people were killed from flash flooding in Fiji on April 1, and a state of emergency was declared.n The Australian Broadcasting Corporation reported that there were about 8,000 people in evacuation shelters and that air travel has resumed today after being grounded yesterday.

Forecasters expect Daphne to continue moving to the east-southeast and maintain strength over the next day or two.