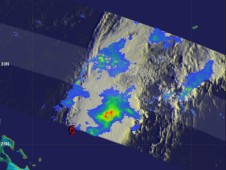 › View larger image
When NASA's TRMM satellite passed over Tropical Storm Patty on Oct. 12 at 0326 UTC (11:26 p.m. EDT, Oct. 11), light to moderate rainfall was occurring northeast of the center of the low pressure area and falling at a rate between .78 to 1.57 inches/20 to 40 mm per hour. There was a small area of heavy rain (red) falling at 2 inches/50 mm per hour. The storm symbol indicates the center of Patty.
Credit: SSAI/NASA, Hal Pierce NASA Sees Tropical Storm Patty Dissipate as a Trough

Tropical Storm Patty stretched out before she dissipated on Oct. 13 and became a trough of low pressure. NASA's TRMM satellite noticed that most of Patty's rainfall was occurring northeast of the storm's center the day before it dissipated.

When NASA's Tropical Rainfall Measuring Mission (TRMM) satellite passed over Tropical Storm Patty on Oct. 12 at 0326 UTC (11:26 p.m. EDT, Oct. 11), light to moderate rainfall was occurring northeast of the center of the low pressure area and falling at a rate between .78 to 1.57 inches/20 to 40 mm per hour. There was also a small area of heavy rain falling at 2 inches/50 mm per hour. The imagery revealed that Patty had already stretched out, and that wind shear was pushing the bulk of the showers and thunderstorms away from the center.

On Oct. 13 at 1500 UTC (11 a.m. EDT) Patty became highly elongated and no longer qualified as a tropical cyclone. At that time, Patty's remnants were located about 220 miles (350 km) east-northeast of the Central Bahamas, near 24.8 North latitude and 72.6 West longitude. Patty had maximum sustained winds near 30 mph (45 kph) and was moving to the west-southwest at 5 mph (7 kph). Patty continued in that direction and dissipated during the evening hours of Oct. 13 near the central Bahamas. 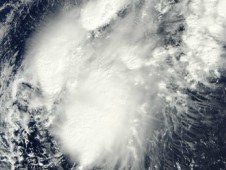 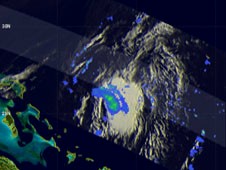 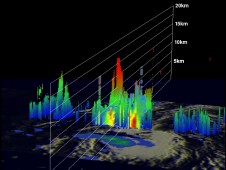 › View larger image
TRMM precipitation radar provided this 3-D view of Tropical Depression 16 (before it became Patty) that showed that a few of the most powerful convective storms called "hot towers" in the developing tropical depression were reaching altitudes of over 16km (~9.9 miles). Click here for a flyby
Credit: NASA/SSAI, Hal Pierce NASA Sees Some Strength in Tropical Storm Patty's Brief Debut

Tropical Depression 16 formed on Oct. 11 and by 5 p.m. EDT that same day, it strengthened into Tropical Storm Patty. NASA's TRMM and Terra satellite's captured imagery on Patty's rainfall intensity and cloud heights, both of which showed strong, high thunderstorms around the center of circulation.

On Oct. 11 at 11 a.m. EDT the National Hurricane Center (NHC) announced the formation of tropical depression sixteen (TD16) northeast of the Bahamas. Earlier, at 0422 UTC (12:22 a.m. EDT), the Tropical Rainfall Measuring Mission (TRMM) satellite had a look at the disturbed weather associated with the formation of TD16. TRMM's Microwave Imager (TMI) and Precipitation Radar (PR) indicated that surface precipitation was falling at a rate of up to 20mm per hour (~0.8 inches per hour) in the northwestern part of this small area of low pressure.

TRMM precipitation radar data was used to create a 3-D view of the storm that showed that a few of the most powerful convective storms called "hot towers" in the developing tropical depression were reaching altitudes of over 16km (~9.9 miles). NASA research has shown that whenever hot towering thunderstorms are spotted within a tropical cyclone, the storm intensifies within about six hours, and the low pressure area did, becoming Tropical Depression 16. It also intensified further into Tropical Storm Patty by 5 p.m. EDT that day.

On Friday, Oct. 12, Patty was drifting at 3 mph (6 kph) south-southwestward near the Bahamas and was already weakening. Tropical Storm Patty had maximum sustained winds near 40 mph (65 kph). Patty's center was located near 25.1 North latitude and 72.5 West longitude, about 230 miles (375 km) east-northeast of the central Bahamas. The National Hurricane Center (NHC) expects Patty to move slowly to the south-southwest or southwest and speed up on Sunday, Oct. 14 while continuing to weaken. In fact, the NHC noted that Patty could become a remnant low pressure area on Saturday, Oct. 13.

Dry and more stable air wrapping around Tropical Storm Patty is the factor that is expected to weaken the storm. The NHC forecasters noted that a low-level ridge (elongated area) of high pressure is building up (strengthening) over the western Atlantic Ocean, and that's going to increase the winds shear from the southwest over the weekend of Oct. 13 and 14, so Patty is likely going to be blown apart in the next day or two. 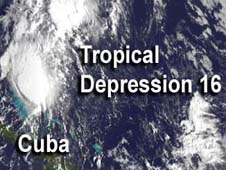 The 16th tropical depression of the Atlantic Ocean season has formed northeast of the Bahamas and NOAA's GOES-14 satellite captured a visible image of the storm as it tracks to the southwest.

NOAA's GOES-14 satellite captured a visible image of newborn Tropical Depression 16 (TD16) near the Bahamas on Oct. 11 at 7:45 a.m. EDT. TD16 appeared as a rounded area of clouds just northeast of the Bahamas and its western fringes were just off the Florida east coast. GOES-14 also showed another low pressure area with the potential for development a few hundred miles from the Windward Islands. That low appeared less organized.

At 11 a.m. EDT on Oct. 11, the newest tropical depression had maximum sustained winds near 35 mph (55 kph). It was located near latitude 25.4 north and longitude 72.6 west, about 235 miles (380 km) east-northeast of the central Bahamas. Tropical Depression 16 is just drifting to the south near 1 mph (2 kph) and according to the National Hurricane Center, is expected to turn toward the southwest and move a little faster. On the forecast track the center of TD16 is expected to remain northeast of the central Bahamas until dissipation occurs tomorrow, Friday, Oct. 12.

While TD16 lives and dies, another low pressure area is trying to find life as a depression. System 98L is a broad area of low pressure associated with a tropical wave is located about 350 miles east-southeast of the Windward Islands.

The National Hurricane Center (NHC) noted that shower and thunderstorm activity picked up today, Oct.11, and it appears to be getting better organized on GOES-14 visible satellite imagery. Some of those showers and thunderstorms may have heavy rainfall and gusty winds. Those storms will be experienced by the residents of the Lesser Antilles over the next couple of days, as System 98L moves to the west-northwest near 15 mph. Rough seas can also be expected in the Lesser Antilles from System 98L.

System 98L is in an environment favorable for development, so the NHC gives it a 50 percent chance of becoming the17th tropical depression of the season in the next couple of days.