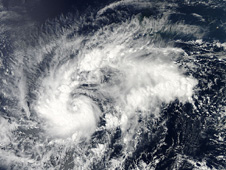 Tropical Storm Olivia was a three-day tropical cyclone in the eastern Pacific Ocean. It was born on Oct. 6 and faded to a remnant low pressure system on Oct. 9. NASA's Aqua satellite captured an image of Olivia just after it became a tropical storm during its brief lifetime.

On Oct. 6, Tropical depression 15E was born near 14.0 North latitude and 118.7 West longitude, about 845 miles southwest of the southern tip of Baja California. It would later strengthen into Tropical Storm Olivia. On Oct. 6, 2012, at 21:25 UTC 5:25 p.m. EDT, the Moderate Resolution Imaging Spectroradiometer (MODIS) instrument that flies aboard NASA's Aqua satellite captured a true-color image of Tropical Storm Olivia off the western Mexico coast. Olivia looked promising, with a large band of thunderstorms wrapping into its center of circulation from the north and west, but adverse atmospheric conditions quickly took a toll on the system.

On Oct. 9, 2012, Tropical Storm Olivia ceased to qualify as a tropical cyclone and was designated by the National Hurricane Center as a remnant low pressure area.