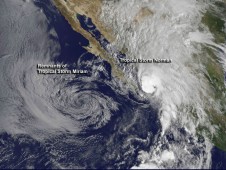 The National Hurricane Center issued their last advisory on Miriam on Sept. 27 at 11 p.m. EDT when it became a remnant low pressure area. At that time, the center of post-tropical cyclone Miriam was located near latitude 22.0 north and longitude 116.7 west, just over 400 miles west of the southern tip of Baja California. Miriam had maximum sustained winds near 30 knots (35 mph/55 kmh).

NOAA's GOES-15 satellite captured an infrared image of Tropical Storm Miriam and a developing low pressure area in the Eastern Pacific on Sept. 28 at 1145 UTC (7:45 a.m. EDT), off the coast of western Mexico. Infrared imagery showed that Miriam had not produced deep convection and strong thunderstorms since 8 a.m. EDT on Sept. 27, so it was downgraded to a remnant low.

According to the National Hurricane Center (NHC), ocean swells generated by Miriam should begin to subside today, Friday, Sept. 28 especially along the western coast of the southern and central Baja Peninsula.

As Miriam fades, Tropical Storm Norman just formed near the Baja mid-day on Sept. 28. The GOES-15 satellite image on Sept. 28 clearly showed Tropical Storm Norman's birth, about 90 miles south-southeast of Baja California. The low appeared somewhat poorly defined on the satellite image, but is producing a large area of showers and thunderstorms within a few hundred miles of the coast of western Mexico.

A Tropical Storm Warning is in effect for the west coast of mainland Mexico from La Cruz, northward to Huatabampo.

As the low moves north, coastal areas between Mazatlan and Huatabampito should expect heavy rainfall and gusty winds. Rainfall as much as 4 to 8 inches can be expected, according to the National Hurricane Center. Residents should be prepared for heavy rain and flooding over the next couple of days.