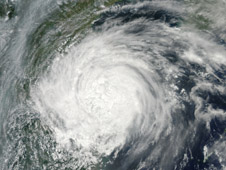 By 5 p.m. EDT Shanghai local time on August 8 Haikui was located near the city of Huzhou. NMC reported heavy rainfall with totals as high as 17 inches (434 millimeters) in Xiangshan, Taizhou, and Ninghai, all located in the southeast coastal province of Zhejiang.

A visible image of Tropical Storm Haikui was captured by the Moderate Resolution Imaging Spectroradiometer (MODIS) instrument that flies onboard NASA's Aqua satellite on August 8, 2012 at 0520 UTC (1:20 a.m. EDT/1:20 p.m. Shanghai local time) after it made landfall south of Shanghai, China. The MODIS image showed an organized tropical storm with high thunderstorms around the center that cast shadows on the lower surrounding storms. Those higher thunderstorms were likely dropping heavy rainfall.

Haikui is moving northwest and is expected to weaken and dissipate over land in the next couple of days. 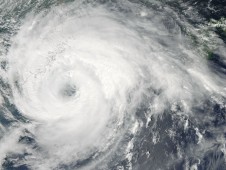 Tropical Storm Haikui is headed for landfall in southeastern China, and NASA's Aqua satellite caught a stunning image of its size and its ragged, but wide eye when it was a typhoon earlier today, August 7. As a result of interaction with land, Haikui has weakened to a tropical storm.

When NASA's Aqua satellite passed over Typhoon Haikui on August 6, 2012 at 12:35 a.m. EDT the Moderate Resolution Imaging Spectroradiometer (MODIS) instrument onboard captured an image of the storm as it was approaching China. The MODIS image clearly showed Haikui's ragged and elongated eye and the northwestern edge of the storm was already over southeastern China at that time.

By August 7 at 1500 UTC (11 a.m. EDT), Haikui dropped down to tropical storm status with maximum sustained winds near 60 knots (69 mph/111 kmh) as it approached the China coastline. Tropical-storm-force winds extend out as far as 100 nautical miles (115 miles/185 km) from the center. Haikui was located approximately 225 nautical miles (259 miles/416.7 km) south-southeast of Shanghai, China, near 28.4 North latitude and 122.5 East longitude. It was headed northwest at 8 knots. Because Haikui was generating 28-foot-high (8.5 meter) seas, residents along the coast can expect dangerous surf, flooding, and coastal erosion.

The Joint Typhoon Warning Center forecasts Typhoon Haikui to maintain its current track and make landfall south of Zhoushan, China by 10 p.m. EDT/U.S. today, August 7 and then turn to the northeast. 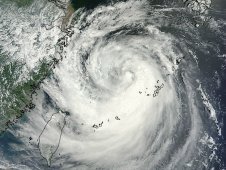 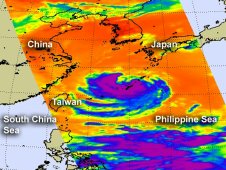 Two NASA satellites have captured data on the activity of Typhoon Haikui as it nears the China coast. NASA's Terra satellite provided a visible look at the storm, while NASA's Aqua satellite investigated it in infrared light. Both showed some strong thunderstorms within that were likely packing heavy rainfall.

NASA's Aqua satellite passed over Typhoon Haikui on August 5. The AIRS instrument captured an infrared image of the cloud temperatures that showed the strongest storms and heaviest rainfall in all quadrants of the storm except the northern area. The strongest storms had cloud top temperatures near or exceeding -63 Fahrenheit (-52 Celsius). In an image captured on August 5 at 0441 UTC (12:41 a.m. EDT), those strong storms were seen over Okinawa, Japan. On August 6, 2012 at 0220 UTC NASA's Terra satellite captured a visible image of Haikui. It showed the western edge of the storm brushing mainland China.

On August 6 at 0900 UTC (5 a.m. EDT), the center of Haikui was northeast of Ishigakijima, Okinawa, Japan. Ishigakijima is the Okinawa Prefecture's third largest island and is Japan's southernmost city island. Haikui is also about 220 nautical miles (253 miles/407 km) northeast of Taipei, Taiwan. The storm is moving to the west-southwest at 5 knots (5.7 mph/9.2 kmh). Its maximum sustained winds were near 65 knots (75 mph/120 kmh).

Haikui is expected to make landfall south of Shanghai early on August 8. 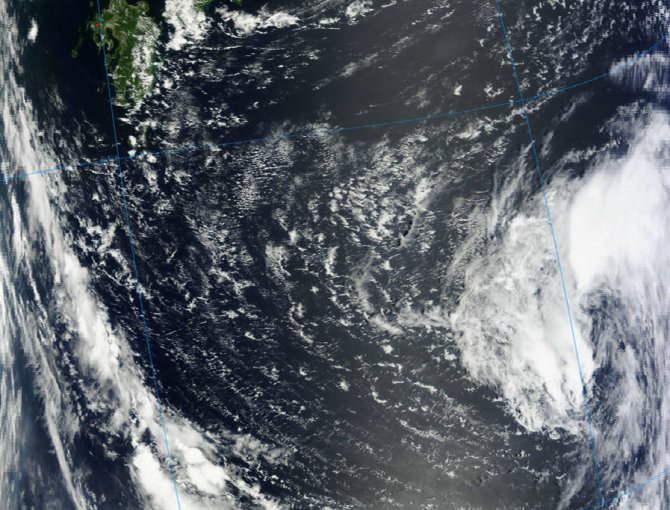 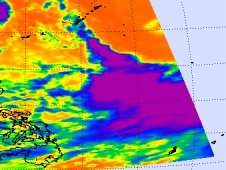 AIRS data showed that cloud top temperatures in Damrey and Saola were warming, while Haikui had a large area of cooling cloud top temperatures. As Damrey made landfall north of Shanghai, China, it was cut off from its power source of warm water, so there was less water vapor to feed into the storm, and the uplift of air weakened (stronger uplift creates clouds and thunderstorms), so the cloud heights fell, and the cloud top temperatures warmed. The same thing occurred in Tropical Storm Saola when it made landfall south of Shanghai. Both storms appeared as tight, rounded areas over land in the AIRS image.

The AIRS image caught the western edge of Tropical Depression Haikui, and it showed a large area of very cold cloud top temperatures, indicating a lot of strength in uplift and strong, high thunderstorms. A good portion of Haikui's cloud top temperatures were as cold as -63 Fahrenheit (-52 Celsius). Those strong storms are indicative of areas where heavy rain is falling. Satellite imagery revealed that the low-level circulation center is partly exposed. There is also a fragmented, banding of thunderstorms wrapping from the northeast quadrant into the northwest quadrant of the storm.

The final warning for Tropical Storm Damrey was issued on August 2 at 2100 UTC, or 5 p.m. EDT. At that time, Damrey had already made landfall north of Shanghai, China, and was about 325 miles (374 miles/602 km) south-southeast of Beijing near 35.0 North latitude and 119.2 East longitude. Damrey's winds were still near 55 knots (63.2 mph/102 kmh) after landfall, but weakening as it moved in a west-northwest direction. Damrey's remnants are expected to dissipate today, August 3.

The final warning on Tropical Storm Saola came today, August 3 at 0300 UTC (Aug. 2 at 11 p.m. EDT) from the Joint Typhoon Warning Center. Saola had already made landfall south of Shanghai and north of Fuzhou, China, and is dissipating inland. At that time, it was centered near 27.0 North latitude and 119.3 East longitude. Saola's maximum sustained winds were less than Damrey's and near 35 knots (40 mph/65 kmh). Saola was also moving faster than Damrey (located to the north) at 14 knots (16 mph/26 kmh). Saola is expected to dissipate today or on August 4.

Out over the open waters of the northwestern Pacific Ocean, newborn Tropical Depression Haikui was getting organized. On August 3 at 1500 UTC (11 a.m. EDT) Haikui's maximum sustained winds were near 30 knots 34.5 mph/55.5 kmh). It was located 580 nautical miles east of Kadena Air Base, Okinawa, Japan, and is moving to the west-northwest at 13 knots (~15 mph/24 kmh). The Joint Typhoon Warning Center forecast calls for Haikui to pass just north of Kadena Air Base on August 5 and slowly intensify.