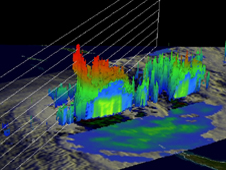 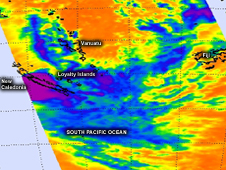 Tropical Storm Freda may no longer be a tropical storm, but as a low pressure area it is bringing rainfall and gusty winds to New Caledonia. Two NASA satellites captured two different looks at the storm.

Wind shear has punched Freda down to tropical storm status on Jan. 1 and weakened it to a remnant low pressure area on Jan. 2. NASA's Aqua satellite showed strong thunderstorms were over New Caledonia early on Jan. 2, while NASA's Tropical Rainfall Measuring Mission (TRMM) satellite peered under the hood of Freda's clouds and measured some moderate to heavy rainfall the day before.

On Jan. 2 Eastern Daylight Time (Jan. 3 local time New Caledonia) Freda had lost its tropical characteristics and became a remnant low pressure area. Freda's remnants were north-northwest of New Caledonia and moving southeastward over the island. New Caledonia is under a yellow alert. Freda went from a powerful cyclone to a remnant low pressure area over three days time, and NASA satellites recorded the decline. On Dec. 31, TRMM's 3-D Precipitation Radar data showed that the tops of some of the powerful storms on Freda's southern side reached heights of 16 km (~9.9 miles). Intense rainfall in these storms returned a reflectivity value of greater than 59 dBZ to TRMM's Precipitation Radar instrument. To see a video of the TRMM satellite flyby, go to: http://trmm.gsfc.nasa.gov/trmm_rain/Events/freda_31_december_2012_0907_utc_flyby.mpg

On Jan. 1, 2013 at 1500 UTC (10 a.m. EST) Cyclone Freda's maximum sustained winds fell below cyclone strength near 45 knots (51.7 mph/83.3 kph). On that day, forecasters at the Joint Typhoon Warning Center (JTWC) noted that "animated infrared satellite imagery, corroborated by a SSMI-S microwave pass, shows the main convection sheared and eroded southeastward of the low level circulation center." That's because Freda had moved into an area where the vertical wind shear is moderate to strong, blowing between 20 and 30 knots (23 and 34.5 mph /37 and 55.5 kph). By Jan. 1 at 1549 UTC (10:49 a.m. EST), Freda's clouds overspread New Caledonia and light rain was falling in Noumeau.

On Jan. 2, showers and thunderstorms covered most of the island and winds increased. On Jan. 2, 2013 at 0211 UTC (Jan. 1 at 9:11 p.m. EST), the Atmospheric Infrared Sounder (AIRS) instrument that flies aboard NASA's Aqua satellite captured an infrared image of Tropical Cyclone Freda. The AIRS image showed that eastern side Freda's clouds covered most of New Caledonia, and infrared data indicated that the coldest, highest clouds with heaviest rainfall covered most of the island. By 1651 UTC (11:51 a.m. EST/3:55 a.m. New Caledonia Time, Jan. 3) Freda had moved further west and New Caledonia was covered by clouds in the storm's eastern quadrant. Freda's low pressure center was located near La Foa, New Caledonia, approximately 21.0 south latitude and 165.7 east longitude.

The forecast for Noumea (located in southern New Caledonia) for Thursday, Jan. 3 calls for rain with a warm high temperature of 88 Fahrenheit (31.1 Celsius). Sustained winds are expected to blow from the south up to 21 knots (25 mph/40 kph) and are expected to continue at that speed overnight before weakening the next day.

By Friday, Jan. 4, the winds are expected to wane over New Caledonia as Freda moves away in an easterly direction. The JTWC noted that "there is a possibility the system could regenerate over the next few days." 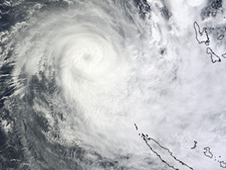 Tropical Cyclone Freda intensified over the last couple of days in the warm waters of the Southern Pacific Ocean, and NASA's TRMM and Aqua satellites measured the rainfall within the storm, and noticed the eye grew larger.

When NASA's Tropical Rainfall Measuring Mission (TRMM) satellite passed over Cyclone Freda on Dec. 30 at 1004 UTC (5:04 a.m. EST) data indicated that the heaviest rainfall was occurring southeast of the center. Rainfall in that area was falling at a rate of 2 inches/50 mm per hour (red). TRMM data showed a 10 nautical-mile (11.5 mile/18.5 km) wide eye in Freda's center. TRMM also showed strong banding of thunderstorms wrapping around Freda's center, indicative of a powerful cyclone.

At 1332 UTC Dec. 31 (8:32 a.m. EST/U.S.) or 12:32 a.m. VUT local time, Jan. 1, 2013, the Vanuatu Meteorology and Geo-Hazards Department (VMGD), Port Vila issued an advisory on Tropical Cyclone Freda. The VMGD bulletin noted "central and southern islands of Vanuatu may receive strong to gale force winds of 60 to 90 KM/HR within the next 36 to 48 hours. Heavy rainfall is expected over central and southern Vanuatu. Flooding is also possible over low lying areas and areas close to river banks." For updated forecasts, visit: http://www.meteo.gov.vu/.

Freda is expected to continue moving southward and turn to toward New Caledonia on Jan. 2, 2013. During the latter half of that period, Freda will be moving over cooler waters and into an area of higher wind shear, which forecasters at the Joint Typhoon Warning Center expect to weaken the storm.

As Freda approaches New Caledonia, residents there can expect the surf to become increasingly rough and periods of heavy rainfall and gusty winds, especially on Wednesday and Thursday, Jan. 2 and 3. For New Caledonia forecasts (in French) from Meteo France, visit: http://www.meteo.gov.vu/.