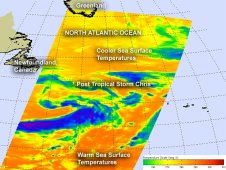 Chris may have been the Atlantic Ocean Hurricane Season's first hurricane, but didn't maintain that title for long. NASA satellite data revealed one good reason why Chris had weakened and became a post-tropical storm.

Sea surface temperatures play a big role in keeping a tropical cyclone alive. They need warm seas of at least 300 Kelvin (80 Fahrenheit/26.8 Celsius) to maintain strength. NASA's Aqua satellite revealed that those conditions were not met where Chris is located in the Atlantic Ocean.

At 11 a.m. EDT on June 22, Chris was now classified as a post-tropical storm with maximum sustained winds near 45 mph (75 kmh). Chris was far to the north near 44.6 North and 46.9 West, about 335 miles (535 km) east-southeast of Cape Race, Newfoundland, Canada. Chris was moving to the west-southwest near 16 mph (kmh), and is expected to slow and turn southward. Chris' minimum central pressure is 990 millibars.

According to the National Hurricane Center, Chris "should merge with another extratropical low on Saturday [June 23]" in the north Atlantic Ocean. 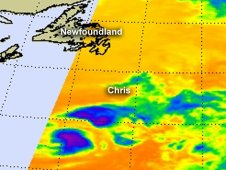 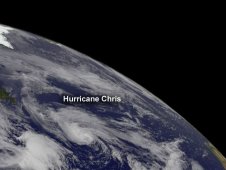 NASA satellites monitoring the life of Chris in the Atlantic saw the tropical storm become the first hurricane of the Atlantic Ocean season on June 21, 2012.

Infrared satellite imagery from NASA's Aqua satellite have revealed that the clouds around Hurricane Chris' eye have reached a cold peak early on June 21 when it was first designated a hurricane, and have since warmed. The thunderstorms that surround Chris' eye are now between -60 and -70 Celsius. Cloud top temperatures that cold indicate strong, high, thunderstorms with the potential for heavy rainfall.

When thunderstorm cloud tops cool, it means there's more uplight in the atmosphere, which can push cloud tops higher and build stronger thunderstorms. When cloud top temperatures warm, it means the cloud tops are falling, and the push of the air upward is lesser than it was before, and the storm is weakening. As a result, forecasters at the National Hurricane Center expect Chris to become a post-tropical cyclone on Friday, June 22. That weakening is expected because Chris is moving into stable air and cooler waters.

NOAA's GOES-13 satellite captured a visible image of Chris on June 21 at 1445 UTC (10:45 a.m. EDT). The image was created by NASA's GOES Project at NASA's Goddard Space Flight Center in Greenbelt, Md. and it showed Hurricane Chris with a tight circulation center. 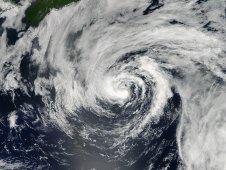 › View larger image
This visible image of Tropical Storm Chris spinning in the North Atlantic Ocean was captured at 17:05 UTC (1:05 p.m. EDT) on June 19, just hours before it was officially designated as a tropical storm. The image was created from the MODIS instrument on NASA's Aqua satellite.
Credit: NASA Goddard MODIS Rapid Response Team NASA Catches Birth of Tropical Storm Chris By the Tail

Several hundred miles from Newfoundland, the third tropical storm of the Atlantic Hurricane Season was born on June 19, and NASA's Aqua satellite captured an image just before it reached tropical storm strength, and he appears to have a "tail" on satellite imagery.

Chris became the Atlantic Season's third tropical cyclone at 5 p.m. EDT on June 19. Hours before the official designation, the Moderate Resolution Imaging Spectroradiometer (MODIS) instrument on NASA's Aqua satellite captured a visible image of Tropical Storm Chris at 17:05 UTC (1:05 p.m. EDT). The image showed a tight center of rounded clouds around Chris' center of circulation. Coming out of that center is a "tail" which gives Chris a comma shape. That tail is a band of thunderstorms wrapping around the northern and eastern portions of the storm's center.

At 5 a.m. Atlantic Standard Time, Chris had maximum sustained winds of 45 mph (75 kph) and was moving to the east near 17 mph (28 kph). Chris was about 590 miles (945 km) south of Cape Race, Newfoundland, Canada near 38.2 North and 53.5 West. The National Hurricane Center expects Chris to speed up and turn northeast, then north over the next day. Little change in strength is expected during the next 48 hours.

Chris is expected to remain at sea and not be a threat to any land areas, while weakening and becoming post-tropical over the next couple of days.