On May 23, 2012, the remnants of post-tropical storm Alberto were chasing a frontal system over the Atlantic Ocean, several hundred miles east of the U.S. East coast. A new NASA animation of imagery from NOAA's GOES-15 satellite shows the progression of Alberto's remnants.

The last advisory on Alberto from the National Hurricane Center was posted on May 22, at 11 a.m. EDT. At that time, Alberto was a post-tropical storm with maximum sustained winds near 35 mph (55 kph). It was centered about 295 miles (470 km) south-southeast of Norfolk, Virginia near 33.1 North and 74.0 West and moving quickly to the northeast at 17 mph (28 kph).


This movie was created using GOES-15 satellite imagery gathered from May 21 to May 23 at 1745 UTC (1:45 p.m. EDT). In the animation, Alberto is first seen off the coast of South Carolina. As the animation progresses, the storm moves northeast toward a large cold front off the coast of the eastern U.S. By May 22 around 1845 UTC, Alberto's remnants appear to begin interacting with the frontal system as both push northeast. By May 23 at 1731 UTC (1:31 p.m. EDT), the weak remaining circulation associated with Alberto is still slightly west of the frontal system. The National Hurricane Center noted that Alberto's remnants are expected to dissipate by sometime on May 25. 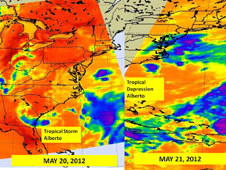 These two images were captured from the AIRS instrument on NASA's Aqua satellite on May 20 and May 21, showing the deterioration of Alberto from a tropical storm to a tropical depression. The purple color indicates the coldest cloud top temperatures, and strongest thunderstorms with the heaviest rainfall. Credit: NASA JPL, Ed Olsen
› Larger image 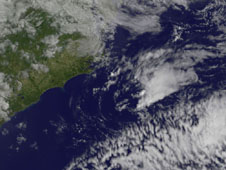 This visible image from the GOES-15 satellite shows Alberto off the coast of North Carolina. The depression appears to look almost wedge-shaped as it continues to weaken and move to the northeast. Credit:: NASA/NOAA GOES Project
› Larger image Alberto Now a Tropical Depression, Seen by NASA

Over two days, NASA's Aqua satellite captured infrared images of Alberto and saw it's deterioration from a tropical storm to a tropical depression. The infrared images were captured from the Atmospheric Infrared Sounder (AIRS) instrument on NASA's Aqua satellite on May 20 and May 21. The coldest cloud top temperatures were as cold as -63F (-52C) and indicated the strongest thunderstorms with the heaviest rainfall.

On May 22, a visible image from NOAA's GOES-15 satellite showed Alberto off the coast of North Carolina. The depression appeared to look almost wedge-shaped as it continues to weaken and move to the northeast. The image was created by the NASA GOES Project at NASA's Goddard Space Flight Center, Greenbelt, Md.

The National Hurricane Center expects Alberto to continue moving northeast and speed up. As Alberto speeds up, it is expected to weaken and could become a post-tropical remnant low pressure area by Wednesday and dissipate by Thursday, May 24. 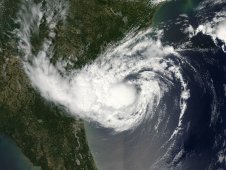 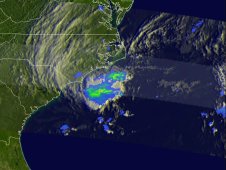 › View larger image
On the day Alberto formed, May 19, NASA's TRMM satellite captured a look at the rainfall rates within the first tropical storm of the Atlantic season. TRMM data showed a large area of moderate to heavy rainfall (falling at a rate of 2 inches/50 mm per hour seen in red) with a small area of heavy rainfall located near the center of the forming tropical cyclone. Light to moderate rainfall was falling at a rate between .78 inches and 1.57 inches per hour (20 to 40 mm).
Credit: NASA/TRMM, Hal Pierce Two NASA Satellites Spy Alberto, the Atlantic Ocean Season's First Tropical Storm

The first tropical storm of the Atlantic Ocean hurricane season formed off the coast of South Carolina on Saturday, May 19, 2012 at 5 p.m. EDT, and NASA satellites were immediately keeping track of it. NASA's TRMM and Aqua satellites have provided a visible look at the compact storm and its rainfall rates.

Tropical Storm Alberto formed 13 days before the official start of hurricane season (June 1) and ramped up quickly. Alberto's maximum sustained winds jumped to 45 mph after it developed. It was located about 140 miles east-southeast of Charleston, South Carolina, and would then take a southerly track.

On that same day, NASA's Tropical Rainfall Measuring Mission (TRMM) satellite passed over Alberto. TRMM data showed a large area of moderate to heavy rainfall with a small area of heavy rainfall located near the center of the forming tropical cyclone. Data from two instruments aboard TRMM provided the rainfall data: the Microwave Imager (TMI) and Precipitation Radar (PR) data captured at 12 minutes after midnight EDT.

On Sunday, May 20, Tropical Storm Alberto had strengthened. A Tropical Storm Watch was posted and later dropped for Savannah River to South Santee River, South Carolina. At that time, Alberto's maximum winds were near 50 mph. By mid-day, Alberto's center was located near 31.7 North and 79.3 West, about 95 miles south-southeast of Charleston, S.C. Alberto was moving west-southwest at 6 mph. Pressure 998 millibars. By 11 p.m. EDT on Sunday, May 20, Alberto appeared to become less organized and weakened. Alberto's maximum sustained winds dropped to 40 mph (65 kph) and it was centered about 85 miles (135 km) east-northeast of St. Augustine, Florida.

The Moderate Resolution Imaging Spectroradiometer (MODIS) instrument onboard NASA's Aqua satellite captured a stunning visible image of Tropical Storm Alberto off the Georgia coast on May 20 at 18:30 UTC (3:30 p.m. EDT) that showed it is a compact storm with a tight center of circulation.

On Monday, May 21, Tropical Storm Alberto was still moving southeast and is about 100 miles east-southeast of St. Augustine Florida. Alberto is causing dangerous surf conditions, including rip currents along the Georgia, South Carolina and northeast Florida coastlines.

The National Hurricane Center forecast calls for Alberto to remain off-shore from Georgia and South Carolina, and then turn to the east and then to the northeast. Although there is no expected change in the strength of Alberto as it turns, the tropical storm is churning up the waters along the coasts of South Carolina, Georgia and northern Florida, causing rough seas and rip tides.