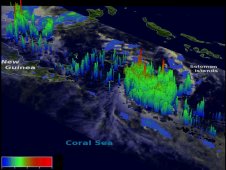 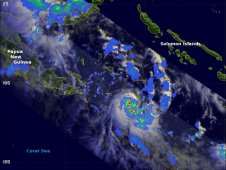 TRMM is the Tropical Rainfall Measuring Mission satellite that is managed by NASA and the Japanese Space Agency, JAXA.

The center of Tropical Depression 21P was directly beneath the TRMM satellite when it passed over on June 28, 2012 at 2225 UTC (~8:25 a.m. local time). A rainfall analysis using data from TRMM's Microwave Imager (TMI) and Precipitation Radar (PR) instruments showed that the tropical cyclone, although small, was well organized and contained some intense convective storms dropping rainfall at a rate of over 50mm/hr (~2 inches).

At NASA's Goddard Space Flight Center in Greenbelt, Md., Hal Pierce of the NASA TRMM Team created a 3-D view of Tropical Cyclone 21P using TRMM's Precipitation Radar data. The 3-D image showed that some of the storms around the tropical cyclone were reaching heights of at least 15km (~9.3 miles). Tropical Depression 21P didn't reach tropical storm force, however, and faded in the Coral Sea over the past weekend (June 30-July 1) due to adverse atmospheric conditions.