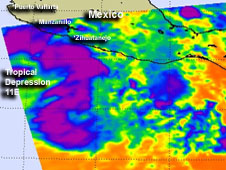 NASA's Aqua satellite captured an infrared image of developing System 90E on Sept. 11 at 3:47 p.m. EDT showing a very large area of strong thunderstorms (purple) on the western side of the center of circulation. System 90E organized more on Sept. 12 and was renamed Tropical Depression 11E. Credit: NASA/JPL, Ed Olsen
› Larger image One of NASA's infrared "eyes" is an instrument that flies aboard the Aqua satellite, and it provided data that helped forecasters determine that low pressure "System 90E" strengthened into the eastern Pacific Ocean's eleventh tropical depression.

The Atmospheric Infrared Sounder (AIRS) instrument onboard Aqua captured an infrared image of System 90E on Sept. 11 at 1947 UTC (3:47 p.m. EDT). That infrared image took the temperatures of the cloud tops and found some strong, high thunderstorms wrapped around the western side of the low pressure area's circulation, from north to south. That area of thunderstorms had cloud top temperatures that exceeded the AIRS data -63 Fahrenheit/-52 Celsius threshold, indicating strong thunderstorms with heavy rainfall and a sign that the low was organizing. Less than 24 hours later, System 90E would be re-named Tropical Depression 11E, when the National Hurricane Center noted "It developed enough organized convection to be classified as a tropical depression."

On Sept. 12 at 11 a.m. EDT Tropical Depression 11E had maximum sustained winds near 35 mph (55 kmh) and the National Hurricane Center noted that the depression could become a tropical storm tonight (Sept. 12) or Thursday, Sept. 13. Tropical Depression 11E was located near latitude 16.7 north and longitude 106.0 west, about 195 miles (315 km) southwest of Manzanillo, Mexico. The depression is moving toward the west-northwest near 10 mph (17 kmh) and the National Hurricane Center expected it to continue in that direction over the next two days, moving away from the coast.