› View larger image
This visible image of Tropical Storm Miriam was captured by NOAA's GOES-15 satellite on Sept. 26, 2012 at 10:45 a.m. EDT off the coast of Baja California. The strongest thunderstorms were in a large band of thunderstorms north and northwest of the center.
Credit: NASA GOES Project Satellite Sees Miriam Weaken to a Tropical Storm

Once a powerful hurricane, Miriam is now a tropical storm off the coast of Baja California, Mexico. Tropical Storm Miriam was seen in the Eastern Pacific Ocean by NOAA's GOES-15 satellite, and the visible image revealed that the strongest part of the storm was north and west of the center.

NOAA's GOES-15 satellite sits in a fixed position over the western U.S. that allows it to monitor the Eastern Pacific Ocean and it captured a visible image of Tropical Storm Miriam on Sept. 26, 2012 at 10:45 a.m. EDT off the coast of Baja California. The image, created by NASA's GOES Project at NASA's Goddard Space Flight Center in Greenbelt, Md. showed that the strongest thunderstorms were north and northwest of the center in a large band, wrapping around the storm's center.

Wind shear is taking its toll on Miriam. The National Hurricane Center noted there is an increasing "separation between the low- to mid-level centers of the storm (think of the storm as having multiple layers) due to 20-25 knots of southwesterly shear associated with a shortwave trough (elongated area of low pressure) rotating around the northwestern side of the storm.

At 11 a.m. EDT on Sept. 26, Tropical Storm Miriam had maximum sustained winds near 65 mph (100 kph), dropping from 70 mph (100 kmh) just six hours before. It was located about 425 miles (680 km) west-southwest of the southern tip of Baja California Miriam was moving slowly at 6 mph (9 kmh) to the north-northwest and away from the coast. Miriam's minimum central pressure was near 992 millibars.

A Miriam continues to pull away from Baja California, rough ocean swells will keep affecting the south and west coasts today, Sept. 26, and tomorrow, Sept. 27. By Sept. 28, Friday, the ocean swells will gradually begin to subside.

Miriam is moving into a region where wind shear is forecast to increase and sea surface temperatures will fall. Those are two factors that will contribute to the weakening of the tropical storm over the next several days. 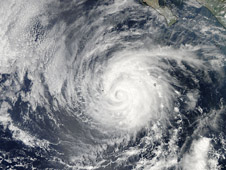 The MODIS instrument that flies aboard NASA's Aqua and Terra satellites provide some of the most clear and stunning imagery of tropical cyclones, and captured a visible image of Category 2 hurricane Miriam off the western coast of Mexico.

MODIS stands for the Moderate Resolution Imaging Spectroradiometer. Terra's MODIS and Aqua's MODIS view the entire Earth's surface every 1 to 2 days, acquiring data in 36 spectral bands, or groups of wavelengths. NASA's Aqua satellite flew over Hurricane Miriam on Sept. 24 at 21:00 UTC and the MODIS instrument captured a visible image of Hurricane Miriam off Mexico's west coast. The MODIS image showed that Miriam's eye was covered by high clouds, yet the eye is still about 30 nautical miles wide. Cloud top temperatures around the eye have cooled in infrared imagery, which indicates thunderstorms around the eye still have strong uplift and are shooting high into the troposphere.

On Sept. 25 at 5 a.m. EDT Hurricane Miriam's maximum sustained winds were near 105 mph (165 kmh), making it a category 2 hurricane on the Saffir-Simpson hurricane scale. Miriam 's hurricane-force winds extend only 30 miles (45 km) from the center. Slow weakening is forecast during the next 48 hours, according to the National Hurricane Center.

Miriam's center was located near latitude 18.7 north and longitude 114.3 west. Miriam is moving in a northwesterly direction near 6 mph (9 kmh) and is expected to turn to the north-northwest later on Sept. 25, followed by a turn to the north. Miriam's estimated minimum central pressure is 968 millibars.

Although Miriam is off-shore, the hurricane is producing very rough seas along the south and western coasts of the central Baja Peninsula, and those conditions will continue for the next several days. 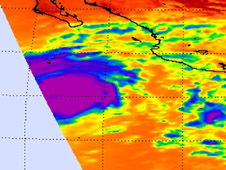 › View larger image
This infrared image of Tropical Storm Miriam was captured by the Atmospheric Infrared Sounder (AIRS) instrument aboard NASA's Aqua satellite. The image was taken on Sept. 23 at 2011 UTC and revealed that Miriam had a huge area (purple) of strong thunderstorms and heavy rainfall around the center of circulation.
Credit: NASA JPL, Ed Olsen NASA's Satellite Saw 'Power-Trigger' Around Hurricane Miriam's Center

NASA's Aqua satellite revealed a large area of powerful thunderstorms around the center of Tropical Storm Miriam on Sept. 23 as it tracked through the Eastern Pacific Ocean. That power was the trigger that helped Miriam rapidly intensify into a major hurricane on Sept. 24.

NASA's Aqua satellite passed over the eastern Pacific Ocean on Sept. 23 and the Atmospheric Infrared Sounder (AIRS) instrument captured an infrared image of Tropical Storm Miriam's cloud top temperatures. Tropical Storm Miriam is born that day, about 640 miles (1,025 km) south-southeast of the southern tip of Baja California. Cloud top temperatures are an indication of uplift in a storm. Uplift is the push of air upward that allows formation of towering clouds and thunderstorms that make up a tropical cyclone. The infrared data indicated a large area of strongest thunderstorms and heaviest rainfall surrounding the center of circulation. Those cloud top temperatures exceeded -63 Fahrenheit (-52 Celsius).

On Friday, Sept. 24 at 11 a.m. EDT, Tropical Storm Miriam became an eastern Pacific hurricane with maximum sustained winds near 120 mph (195 kmh). Miriam was located about 410 miles (655 km) south-southwest of the southern tip of Baja California, Mexico, near latitude 17.7 North and longitude 112.9 West. Miriam is moving northwest near 12 mph (19 kmh) and a gradual turn to the west and southwest is expected later.

Visible imagery from NOAA's GOES-15 satellite suggests the formation of a small eye, while NASA's Tropical Rainfall Measuring Mission (TRMM) satellite data suggest that an outer eyewall is forming. The National Hurricane Center noted that barring an eyewall replacement, Miriam could strengthen even more in the next day.