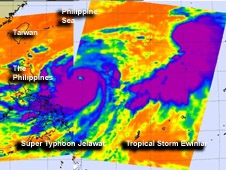 This combined image was created from infrared AIRS data of Super Typhoon Jelawat on Sept. 25 and Tropical Storm Ewiniar on Sept. 24 to give perspective of their distance from each other. The eye of Jelawat is clearly visible in the middle of powerful thunderstorms (purple) with very cold cloud top temperatures. Credit: NASA JPL/Ed Olsen
› View larger NASA's Aqua satellite has been obtaining infrared, visible and other data every time it passes over Typhoon Jelawat and Tropical Storm Ewiniar in the western North Pacific, and a combination of two images from Aqua's AIRS satellite puts the storms in perspective.

A combined image created from infrared data obtained by the Atmospheric Infrared Sounder (AIRS) instrument that flies on NASA's Aqua satellite provides a comparison of the two monster storms in the western North Pacific Ocean basin. An infrared image of Typhoon Jelawat captured on Sept. 25 was combined with an image of Tropical Storm Ewiniar, that was taken on Sept. 24. The combined image gives perspective of the distance of the tropical cyclones from each other. The image showed the close proximity of the storms. Earlier in the week, Jelawat's outflow was affecting Ewiniar and preventing it from strengthening more quickly.

The data also showed a visible eye in the center of super typhoon Jelawat in the middle of powerful thunderstorms with very cold cloud top temperatures that exceed -63 Fahrenheit (-52 Celsius). Jelawat also has a rounded shape indicating that circulation is strong and symmetrical. Tropical Storm Ewiniar, however, appears somewhat asymmetrical, in the form of an elongated comma shape. The comma's "tail" is a large band of strong thunderstorms wrapping into Ewiniar's center from the southeast.

Jelawat remains a super typhoon today, Sept. 25, with maximum sustained winds near 140 knots (161 mph/259 kmh). It is located 385 nautical miles east-northeast of Manila, Philippines, and is moving north-northwestward at 6 knots (7 mph/11 kmh). Satellite imagery is showing tightly wrapped bands of thunderstorms spiraling into the eye of the storm. The eye is about 17 nautical miles wide. High pressure in the upper atmosphere and low wind shear are helping the super typhoon maintain its intensity. The JTWC projected storm track showed the storm moving toward the north-northwest over the next several days, passing near the island of Taiwan before turning toward the northeast. 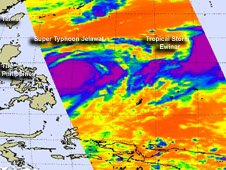 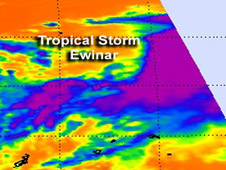 The above infrared images of Tropical Storm Jelawat (top) and Tropical Storm Ewiniar (bottom) were captured by the AIRS instrument aboard NASA's Aqua satellite. The images were taken on Sept. 24 and revealed that Typhoon Jelawat and Tropical Storm Ewiniar had large areas of strong thunderstorms (purple) and heavy rainfall around the center of circulation. Credit: NASA JPL, Ed Olsen
› View top image larger Tropical Storm Jelawat had been moving toward the Philippines since the week of Sept. 17 and on Sept. 24 it became a super typhoon east of the country. Meanwhile, the nineteenth tropical depression formed just east of Jelawat in the western North Pacific Ocean and quickly strengthened into a tropical storm. Both storms were captured on one infrared image from NASA's Aqua satellite.

Jelawat's center continues to stay east of the Philippines, but is causing rough surf (with wave heights up to 37 feet/11.2 meters) along the eastern coasts of the country and its large extent is bringing rains and gusty winds as well.

Jelawat is a powerful Super Typhoon with a clear 23 nautical mile-wide eye and maximum sustained winds near 130 knots (149.6 mph/240.8 kmh).Jelawat is a Category 4 typhoon on the Saffir-Simpson scale. It is located near 15.0 North latitude and 127.9 East longitude, approximately 410 nautical miles (472 miles/759 km) east of Manila, Philippines. Jelawat's minimum central pressure is near 926 millibars. Jelawat is forecast to track to the northwest through the Philippine Sea and move toward Taiwan.

Tropical Storm Ewiniar had maximum sustained winds near 35 knots (40 mph/64.8 kmh) on Sept 24 at 1500 UTC (11:00 a.m. EDT). It was centered near 20.9 North and 138.9 East, a 300 nautical miles (345 miles/555.6 km) south-southwest of Iwo To. AIRS data showed that the low-level center is slowly consolidating (organizing) and becoming less elongated. The strongest convection and thunderstorms were seen in a band of thunderstorms east of the center of circulation. Ewiniar is getting organized slowly because of westerly wind shear caused by nearby Typhoon Jelawat.

The Joint Typhoon Warning Center expects Ewiniar to track to the north-northeast and affect Iwo Two tomorrow, Sept. 25 as it continues in a northeasterly direction. 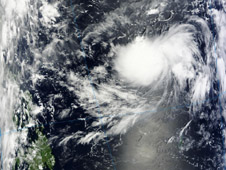 The MODIS instrument on NASA's Terra satellite captured this true-color image of Tropical Storm Jelawat on Sept. 20, 2012 at 01:50 UTC, before it had strengthened into a tropical storm. The Philippines is visible in the lower left corner. (Credit: NASA/Goddard/MODIS Rapid Response Team)
› Larger image

As another tropical storm was forming in the northwestern Pacific Ocean, NASA's Terra satellite was providing forecasters at the Joint Typhoon Warning Center with visible and other data on the storm.

NASA's Terra satellite passed over Tropical Depression 18W before it strengthened into Tropical Storm Jelawat late in the day on Sept. 20, in the Philippine Sea (part of the western North Pacific Ocean basin).

On Sept. 20 at 01:50 UTC, as the depression was strengthening into a tropical storm, the Moderate Resolution Imaging Spectroradiometer (MODIS) instrument on NASA's Terra satellite captured a true-color image of the storm. The MODIS image showed a rounded shape, which indicates good circulation. There was also a band of thunderstorms east of the center of circulation.

Forecasters used infrared satellite imagery, such as that from the Atmospheric Infrared Sounder instrument that flies aboard NASA's Aqua satellite to determine the initial position of the tropical storm. Infrared data from Sept. 21, 2012, showed that the strongest convection and coldest cloud top temperatures were in the northwestern and southeastern quadrants of the tropical storm. Those areas were experiencing the heaviest rainfall.

By 10 p.m. local time in Manila, Philippines (10 a.m. Eastern Time/U.S.) on Sept. 21, Jelawat's center was about 311 miles (500 km) east of Catarman capital of Northern Samar, near 12.4 north latitude and 129.7 east longitude. Northern Samar is a Philippine province in the Eastern Visayas region.

The Philippine Atmospheric Geophysical and Astronomical Services Administration issued a bulletin about Jelawat (known locally as Lawin) on Sept. 21 that noted "Estimated rainfall amount is from 10 to 25 mm (0.4 to 0.9 inches) per hour within the 600 km (373 miles) diameter of the Tropical Storm. Fishing boats and other small seacrafts are advised not to venture out into the eastern seaboard of Southern Luzon, Visayas and Mindanao due to big waves generated by Tropical Storm (Jelawat) Lawin."

Jelawat is expected to track slowly west-northwestward over the weekend of Sept. 22 and 23 while the storm intensifies. The forecast track from the Joint Typhoon Warning Center keeps the center of Jelawat at sea, while almost tracking parallel to the Philippines.