Before Irene even reached hurricane status, a NASA satellite saw heavy rainfall and hot towering thunderstorm clouds around the storm's center this weekend. That heavy rainfall is expected as Irene continues to track through the Caribbean today.


The Tropical Rainfall Measuring Mission (TRMM) satellite passed over Irene when it was a tropical storm on August 21, 2011 at 0024 UTC (8:24 p.m. EDT August 20). Data collected with this orbit showed that Irene contained numerous powerful thunderstorms with TRMM's Precipitation Radar revealing that some thunderstorm towers near the center of the storm were reaching to heights above 15 km (~9.3 miles). 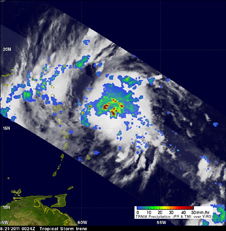 The TRMM satellite passed over Irene when it was a tropical storm on August 21 2011 at 0024 UTC (8:24 p.m. EDT August 20). Data collected with this orbit showed that Irene contained numerous powerful thunderstorms with TRMM's Precipitation Radar (PR) revealing that some thunderstorm towers near the center of the storm were reaching to heights above 15 km (~9.3 miles). Credit: NASA/SSAI, Hal Pierce
› Larger image 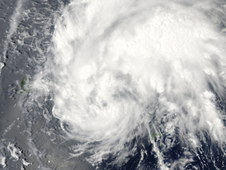 This visible image was taken from the MODIS instrument on NASA's Aqua satellite on August 21, 2011 at 17:45 UTC (1:45 p.m. EDT) when Irene was still a tropical storm approaching Puerto Rico (left). Credit: NASA Goddard MODIS Rapid Response Team
› Larger image Those "hot towers" are called "hot" because they rise to such altitude due to the large amount of latent heat. Water vapor releases this latent heat as it condenses into liquid.

Back in 2004, researchers Owen Kelley and John Stout of NASA's Goddard Space Flight Center, Greenbelt, Md., found that a tropical cyclone with a hot tower in its eyewall was twice as likely to intensify within the next six hours than a cyclone that lacked a tower. Irene had those hot towers and did intensify into a hurricane.

The National Hurricane Center noted on August 22 that Irene is expected to produce total rainfall accumulations of 5 to 10 inches across Puerto Rico, The Virgin Islands, the Dominican Republic, Haiti, the Southeastern Bahamas and The Turks and Caicos Islands. Isolated maximum amounts of rainfall may reach up to 20 inches.

In addition to the TRMM satellite, NOAA's Geostationary Operational Environmental Satellite, GOES-13 has documented the birth of Irene from a low pressure area called System 99L over the weekend. The NASA GOES Project at NASA Goddard Space Flight Center in Greenbelt, Md. compiled four days of animations to show the development and movement of Hurricane Irene and former Tropical Storm Harvey.

A GOES-13 animation from August 19 through August 22 (1545 UTC/11: 45 a.m. EDT) shows the progression of Tropical Storm Harvey through the western Caribbean Sea. Over the weekend, Harvey made landfall in Belize and is moving into Mexico today. Farther to the east, the animation shows the development of the low pressure area called System 99L into Hurricane Irene on August 20 that moved over Puerto Rico and is now moving west-northwest into the eastern Caribbean today. Irene's maximum sustained winds on the morning of August 22 were near 75 mph. The 35 second video shows more than three days of development and movement of Harvey and Irene.

A Tropical Storm Warning is in effect for the U.S. Virgin Islands, the British Virgin Islands, the south coast of the Dominican Republic, all of Haiti and the southeastern Bahamas and the Turks and Caicos Islands. The warning has been changed from hurricane to tropical storm warning for Puerto Rico, Vieques and Culebra as Irene is moving away.

At 9 a.m. EDT, August 22, Irene was moving away from Puerto Rico and toward the Southeastern Bahamas. Irene's maximum sustained winds were near 75 mph (120 kmh) and it was moving to the west-northwest near 14 mph (22 kmh). Irene's center was about 55 miles (90 km) west-northwest of San Juan, Puerto Rico near 18.8 North and 66.8 West. Irene's minimum central pressure was 987 millibars.

Irene is forecast to reach Florida later this week and if it makes landfall as a hurricane, it would be the first landfalling hurricane in the mainland U.S. in three years. The last landfalling U.S. storm was Hurricane Ike in Galveston, Texas in 2008. 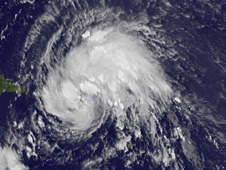 On Sunday, August 21, a satellite image from the Geostationary Operational Environmental Satellite called GOES-13 showed Tropical Storm Irene's clouds over Puerto Rico. Maximum sustained winds were near 50 mph and Irene is expected to be a hurricane on Monday, August 22, but is forecast to weakening after its center moves over Dominican Republic. Watches and Warnings were posted on Sunday, August 21 and continue through the eastern Caribbean. Current forecasts suggest Irene will again reach hurricane status before making landfall in southern Florida later this week.

On Sunday, August 21 at 8 p.m. EDT, Tropical Depression Harvey was over the Bay of Campeche and was expected to re-strengthen into a tropical storm. It was located 50 miles northeast of Coatzacoalcos, Mexico. A GOES-13 satellite image captured at 6 p.m. EDT pm August 21 showed Harvey's cloud cover as a circular area. Maximum sustained winds were near 30 mph, and Harvey was moving to the west-northwest near 14 mph. Tropical storm warning is in effect for the coast of southern Mexico from Punta El Lagarto To Barra De Nautia. Harvey's rainfall forecast ranges from 2 to 4 inches and isolated amounts to 10 inches. Tropical storm-force winds expected to reach the coast of southern Mexico with the warning area Monday morning.