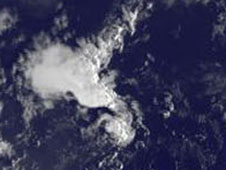 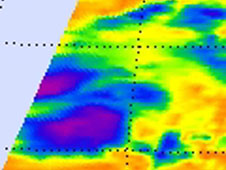 › View larger image
When NASA's Aqua satellite passed over the very small and compact Tropical Storm Jose on August 29 at 1:53 a.m. EDT, the Atmospheric Infrared Sounder (AIRS) instrument captured one small area of strong thunderstorms (purple) remaining near its center of circulation. That area is where thunderstorm cloud tops were very high and as cold as -63 F (-52C).
< Credit: NASA JPL, Ed Olsen
While the remnants of Hurricane Irene drench Quebec and Newfoundland, Canada today, NASA satellites are keeping tabs on two other tropical cyclones in the Atlantic: Tropical Storm Jose and newly formed Tropical Depression 12.

NOAA's GOES-13 satellite, known as the Geostationary Operational Environmental Satellite has been providing infrared and visible images all tropical cyclones over the Atlantic Ocean this season and has now seen the development of the twelfth storm while two others still remain. The NASA GOES Project out of NASA's Goddard Space Flight Center in Greenbelt, Md. created an image from GOES-13 on Monday, August 29 at 7:45 a.m. EDT that shows Irene over eastern Canada, Jose in the central Atlantic and Tropical Depression 12 in the far eastern Atlantic.

On Monday, August 29 at 5 a.m. EDT, the twelfth tropical depression of the Atlantic Ocean season formed in the eastern Atlantic. Tropical Depression 12 (TD12) formed about 395 miles (635 km) south of the Cape Verde Islands, near 9.4 North and 26.3 West. It had maximum sustained winds near 35 mph (55 kmh) and was moving to the west near 15 mph (24 kmh). TD12's minimum central pressure was 1009 millibars. The National Hurricane Center expects strengthening to occur and that would change TD12 into Tropical Storm Katia. Because TD12 is in an environment with low wind shear and warm sea surface temperatures the National Hurricane Center is forecasting the depression to become a tropical storm and even a hurricane later this week.

Farther west, Tropical Storm Jose, that formed on Sunday, August 28, isn't faring so well. Jose is now racing over the North Atlantic, where sea surface temperatures are below the 80F (26.6C) threshold needed to help a tropical cyclone to maintain its strength. So, the National Hurricane Center expects Jose to lose his tropical characteristics later today, August 29. 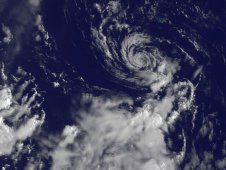 A new tropical storm formed in the Atlantic Ocean on Sunday morning, August 28 and is dwarfed by the massive now Tropical Storm Irene.

Tropical Storm Jose formed near Bermuda causing tropical storm warnings for the island. At 8 a.m. EDT, Jose had maximum sustained winds near 40 mph and was moving to the north near 16 mph, a track he is expected to stay on, keeping him away from the U.S. east coast. Jose was located about 115 miles south-southwest of Bermuda. This GOES-13 satellite image from 8:32 a.m. shows the minimal tropical storm that has already caused a tropical storm warning for Bermuda. Jose is expected to continue moving north after affecting Bermuda where it is forecast to weaken into a depression.