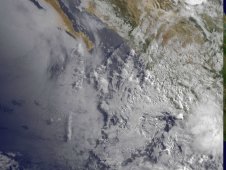 › View larger image
This visible image of Beatriz' remnants was taken from the GOES-11 satellite on June 22 at 13:30 UTC (9:30 a.m. EDT) and shows a disorganized clouds off the western coast of Mexico.
Credit: NASA/NOAA GOES Project, Dennis Chesters 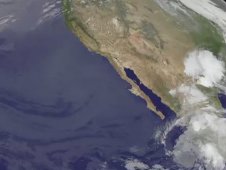 Satellite data from NASA and NOAA showed that Tropical Storm Beatriz went from a strong tropical storm to a remnant low pressure area in six short hours after running into Mexico's western mountains. An animation of imagery from the GOES-11 satellite showed how quickly Beatriz fizzled.

According to reports from Agence-France Presse, Beatriz downed trees and left flooding in her wake. Coastal areas reporting flooding include Acapulco and Huatulco, in Oaxaca state.

At 5 p.m. EDT on June 21, Beatriz had maximum sustained winds near 60 mph, and as Beatriz interacted with the mountainous terrain of Mexico its strength waned quickly.

By 11 p.m. EDT the center of circulation was no longer well-defined and maximum sustained winds dropped to 30 mph. It was a quick drop in strength over six hours and transformed Beatriz from a strong tropical storm to a weak tropical depression. At that time her center was located near 19.0 North latitude and 107.0 West longitude and moving westward near 10 mph (17 kmh).

Today, June 22, Beatriz' remnants are slowly moving over cooler sea surface temperatures. As a result, the low pressure area has a slim chance of regenerating because temperatures of at least 80 degrees Fahrenheit are needed to maintain a tropical cyclone, and these waters are near or below that threshold.

As of 8 a.m. EDT today, Beatriz' remnants were about 175 miles southwest of Cabo Corrientes, Mexico. The National Hurricane Center noted today that the chance for regeneration is now "near zero." 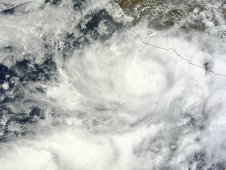 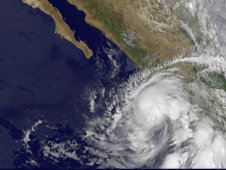 Hurricane Beatriz is skirting the southwestern Mexican coast today, June 21 and bringing heavy rains and high surf to coastal areas, including Mexico's biggest port. NASA satellite imagery showed that Beatriz seemed to develop an eye that opened on microwave imagery and closed on visible imagery, appearing to give satellites a "wink."

Last night (June 20, 2011) by 8 p.m. EDT, heavy rains were spreading over the southwestern Mexican coast. At that time, Beatriz was still a tropical storm. By 11 p.m. EDT Beatriz had strengthened into a hurricane. At 5 a.m. EDT today, June 21, Beatriz' center was only 15 miles from Manzanillo and that means the city was experiencing hurricane-force winds and heavy rainfall because hurricane force winds extended 25 miles from the storm's center.

Manzanillo is a city and a surrounding municipality in the Mexican state of Colima. The city is known for tourism, deep-sea fishing, is a port of call for cruise lines and is Mexico's busiest cargo port.

On June 20 at 17:40 UTC (1:40 p.m. EDT) the Moderate Resolution Imaging Spectroradiometer known more commonly as "MODIS" that flies on NASA's Terra satellite captured a visible image of Hurricane Beatriz off the coast of western Mexico. Beatriz was a tropical storm at that time and an eye had not yet materialized.

More than 12 hours later, microwave imagery from the Atmospheric Infrared Sounder instrument on NASA's Aqua satellite revealed an eye in the storm for a short time. The eye "opened" and appeared well defined and between 20 and 20 nautical miles wide. AIRS also detected that the cloud top temperatures in the thunderstorms surrounding the eyewall were colder than -80 Fahrenheit!

Later this morning, that eye appeared to have "closed" on satellite imagery from the Geostationary Operational Environmental Satellite called GOES-11. GOES-11 is managed by NOAA, while the NASA GOES Project at the NASA Goddard Space Flight Center in Greenbelt, Md. creates images and animations from the satellite, including today's image. The GOES-11 satellite showed Hurricane Beatriz at 1230 UTC (8:30 a.m. EDT/5:30 a.m. PDT) was on top of the coast of southwestern Mexico. Beatriz's eye was not visible in this morning's image.

At 8 a.m. EDT (5 a.m. PDT), Hurricane Beatriz had maximum sustained winds near 90 mph (150 kmh) with higher gusts. It was moving northwest near 13 mph (20 kmh). Minimum central pressure is 997 millibars. Beatriz was on the coast and its center was about 15 miles (20 km) south-southeast of La Fortuna near 19.4 North and 105.0 West. It's now 50 miles west-northwest of Manzanillo, Mexico and moving away after drenching the city earlier today.

Currently a hurricane warning is in effect for the coast of Mexico from Lazaro Cardenas northwestward to Cabo Corrientes.

The National Hurricane Center noted that there's a chance that Beatriz may strengthen a little more this morning, and once the center of the hurricane interacts with the land of the coast it will begin weakening. In addition, Beatriz continues to move northward into cooler sea surface temperatures, which will also zap its strength. 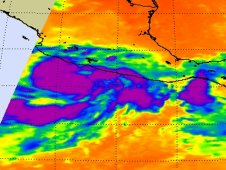 › View larger image
NASA's Aqua satellite passed over Tropical Storm Beatriz on June 20 at 08:11 UTC and the AIRS instrument captured this infrared image of the storm. The image showed a more rounded and organized circulation with strong convection (purple) and cloud tops as cold as -63F/-52C.
Credit: NASA/JPL, Ed Olsen 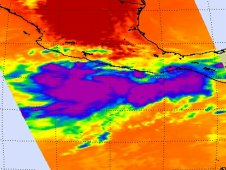 Beatriz formed from the low pressure area System 92E that NASA and JAXA's Tropical Rainfall Measuring Mission (TRMM) was watching last week. The low pressure area was coming together on Friday, June 17 and had some isolated areas of heavy rainfall. Those areas of heavy rainfall have increased as the low organized and strengthened over the weekend. On June 19 at 11 a.m. EDT it became tropical depression two-E. Just three hours later it reached tropical storm strength and was named Beatriz.

Infrared imagery on June 19 and 20 from the Atmospheric Infrared Sounder (AIRS) instrument that flies aboard NASA's Aqua satellite showed that cloud tops are cooling, indicating growing and higher thunderstorms. Typically - the higher the thunderstorm, the stronger the storm. Those cloud top temperatures in infrared imagery reached the threshold of strongest storms/coldest cloud tops, for the AIRS data of temperatures as cold as or colder than -63 Fahrenheit (-52 Celsius).

By June 20 at 08:11 UTC (4:11 a.m. EDT) the AIRS instrument on NASA's Aqua satellite showed a more rounded and organized circulation with strong convection. Meteorologists at the National Hurricane Center use this data with other satellite data in their forecasts and expect Beatriz to reach hurricane status later today.

Maximum sustained winds were near 65 mph/100 kmh). It was about 125 miles (205 km) south-southwest of Lazaro Cardenas, Mexico and 210 miles (335 km) south-southeast of Beatriz is moving to the northwest near 9 mph (15 kmh) and has a minimum central pressure of 995 millibars.

Coastal communities in the warning and watch area should be prepared for tropical storm conditions today followed by hurricane conditions tonight. Rainfall is expected to be excessive between 6 and 12 inches in the states of Guerrero, Jalisco, Colima and Michoacan in southwestern Mexico with isolated amounts to 20 inches in mountainous areas. That means life-threatening flash floods and mudslides are possible. Coastal areas, however, face flooding from storm surge. 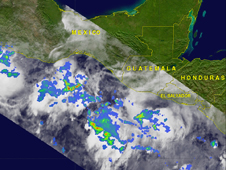 › View larger image
This TRMM satellite image of rainfall within the low pressure area called System 92E shows that most of the rainfall is moderate with some areas of heavy rainfall over the Eastern Pacific Ocean. The yellow and green areas indicate moderate rainfall between 0.78 to 1.57 inches per hour. Red areas are heavy rainfall at almost 2 inches per hour.
Credit: NASA/SSAI, Hal Pierce A low pressure area in the Eastern Pacific Ocean, located off the western coast of Mexico, is still getting organized, and System 92E and the Tropical Rainfall Measuring Mission (TRMM) satellite spotted heavy rain and strong thunderstorms within.

On Friday, June 17, 2011, System 92E appeared on satellite imagery as a broad area of low pressure that contained showers and thunderstorms. System 92E was located several hundred miles south of the Gulf of Tehuantepec. The gulf is a large area at 16 North and 95 West, which is right where the low pressure area is centered. Many tropical cyclones in the Eastern Pacific get organized near or in the Gulf.

The National Hurricane Center (NHC) noted today that the environmental conditions (warm sea surface temperatures and light vertical wind shear) are favorable for development, and they give System 92E a Medium chance for development over the weekend.

The TRMM satellite, co-managed by NASA and the Japanese Space Agency always watches the tropics, and flew over System 92E on June 16 at 1216 UTC (8:16 a.m. EDT). At that time, TRMM's Microwave Imager (TMI) and Precipitation Radar (PR) data showed moderate to heavy rainfall in clusters of thunderstorms parallel to the coastlines of southern Mexico, Guatemala and El Salvador.

Today, June 17, the NHC reported scattered moderate and isolated strong convection was flaring up in System 92E within 90 nautical miles of 13 North and 93 West, along the coast of El Salvador and Guatemala. The NHC forecasts the low pressure area to drift west over the weekend and possibly strengthen into a tropical storm. If System 92E does become a tropical storm it would get the name "Beatriz."

On June 13, the remnants of the once Major Hurricane Adrian finally dissipated in the Eastern Pacific.

Over the weekend El Salvador, Guatemala, and southern Mexico can expect showers and thunderstorms from this system as it moves and organizes.