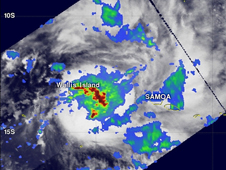 TRMM measured rainfall rates in System 95P and picked up some heavy rain (in red) near the center of the low, falling at about 2 inches (50 mm) per hour. The yellow and green areas indicate moderate rainfall between .78 to 1.57 inches per hour. Credit: SSAI/NASA, Hal Pierce
› Larger image NASA's TRMM satellite is keeping an eye on a developing low pressure area in the South Pacific Ocean that may become the next tropical depression of the season. System 95P is close to Wallis Island, and automated weather stations there are already noticing strengthening.

The Tropical Rainfall Measuring Mission (TRMM) satellite passed over a developing low pressure system in the South Pacific on Jan. 20 at 1712 UTC (12:12 p.m. EST) and noticed that some of the thunderstorms are almost 12 kilometers high, indicating that there is some strong uplift (convection) in the system. TRMM also measured rainfall rates and picked up some heavy rain near the center of the low, falling at about 2 inches (50 mm) per hour. TRMM is managed by NASA and the Japanese Space Agency, JAXA.

Wallis Island is located in the South Pacific Ocean and belongs to the French overseas collectivity of Wallis and Futuna. The Polynesian island archipelago has an area of 77 km² (29.7 square miles). Its highest point is Mount Loka which rises 131 meters (429 feet) above the sea’s surface.

Because of the low pressure area's proximity to Wallis Island, the weather observations from the island provide some insight into the behavior of the storm. Recent automated surface observations from there indicate falling pressure, which means the storm is strengthening. The pressure has fallen by 2 millibars over 24 hours to 1001 millibars.

The low-level center of the storm wasn't obvious in multispectral satellite imagery, but strong banding of thunderstorms was evident along the northeastern edge of the circulation. Maximum sustained winds are estimated between 20 and 25 knots (23 mph/37 km/hr and 29 mph/46 km/hr).

The Joint Typhoon Warning Center forecasts for tropical cyclones in that region of the world, and noted that there is a "fair chance" that System 95P will develop into a tropical depression over the weekend.