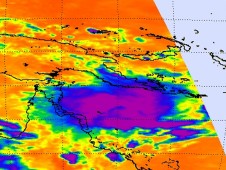 › View larger image
This NASA AIRS Infrared image on January 13, 2011 at 0353 UTC showed some strong convection in the center of System 94P where cloud tops were as cold as or colder than -63 Fahrenheit (-53 Celsius), strong thunderstorms were and areas where heavy rain was likely falling.
Credit: NASA/JPL, Ed Olsen The last thing that Queensland, Australia needs is more rainfall after the record-breaking flooding that has been occurring there in the last two months. Now, NASA's Aqua satellite has noticed a low pressure area with signs of tropical development in the Coral Sea ( part of the South Pacific Ocean Basin), between Papua New Guinea and Australia's East Coast.

When NASA's Aqua satellite passed over System 94P on January 13, 2011 at 0353 UTC, the Atmospheric Infrared Sounder (AIRS) instrument captured an infrared image of the low's cloud temperatures. The AIRS cloud temperatures revealed some strong convection in the center of System 94P where cloud tops were as cold as or colder than -63 Fahrenheit (-53 Celsius) in strong thunderstorms and areas where heavy rain was likely falling. At that time, however, heavy rainfall was limited to areas over open ocean.

At 1000 UTC on Jan. 13, System 94P was located about 285 miles northeast of Cairns, Australia near 14.0 South and 149.7 East. Maximum sustained winds are reported around 33 mph (55 km/hr), just near tropical depression status. The low is still not a tropical depression, but forecasters at the Joint Typhoon Warning Center give it a good chance to become one. Minimum central pressure is estimated near 1001 millibars.

The JTWC noted that "Animated multispectral imagery Indicated that rapid consolidation and intensification of the low level circulation center over the past 12 hours (to 2200 UTC on Jan. 12). System 94P is also in an area of low wind shear and sea surface temperatures warmer than the 80F threshold needed to help a tropical cyclone develop.

Currently the JWTC is projecting that System 94P will track to the northeast away from eastern Australia over the next couple of days and toward Port Moresby, Papua New Guinea. Forecasters will keep watching to see if System 94P becomes a tropical depression in the next day or two.