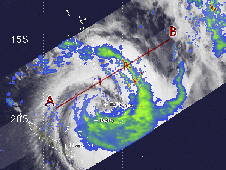 › View larger image
TRMM captured the rainfall rates of Tropical Storm Vania on January 12 at 1246 UTC. The yellow and green areas indicate moderate rainfall between .78 to 1.57 inches per hour. The heaviest rains were falling in the northeastern quadrant of the storm (Red) and indicate rainfall at about 2 inches per hour. Credit: NASA/SSA The low pressure area that NASA has been watching previously known as System 93P strengthened into the fifth tropical depression of the South Pacific Hurricane season late yesterday. This morning System 93P strengthened even more and became a tropical storm. NASA's TRMM Satellite flew over Tropical Storm Vania saw the heavy rainfall and towering thunderstorms within.

The Tropical Rainfall Measuring Mission (TRMM) satellite captured the thunderstorm heights and rainfall rates in Tropical Storm Vania on January 12 at 1246 UTC (7:46 a.m. EST). TRMM noticed that some of the thunderstorms reached more than 9 miles (~15 kilometers) high, indicating strong uplift and a heavy rainmakers. TRMM also noticed that the heaviest rains were falling in the northeastern quadrant of the storm and indicate rainfall at about 2 inches per hour. Other quadrants of the storm were generating moderate rainfall rates between .78 to 1.57 inches per hour. TRMM is managed by NASA and the Japanese Space Agency, JAXA.

Warnings are posted for Vanuatu and New Caledonia. The Vanuatu warnings
› Back To Top