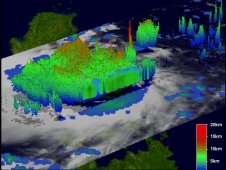 › View larger image
The Tropical Rainfall Measuring Mission (TRMM) satellite data was used to create a 3-D image of System 90L's rainfall and cloud heights as it passed overhead on July 26 at 1435 UTC (10:35 a.m. EDT). System 90L did have towering convective storms near its center of circulation that extended to heights above 15km (~9.3 miles) with heavy rainfall, falling at 2 inches (50 mm) per hour.
Credit: NASA/SSAI, Hal Pierce 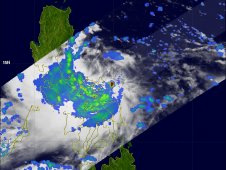 A low pressure system in the Caribbean appears primed to develop into the Atlantic Ocean season's fourth tropical depression, as NASA's TRMM satellite noticed powerful "Hot Towers" around the center of circulation.

On July 26 at 1435 UTC (10:35 a.m. EDT) the Tropical Rainfall Measuring Mission (TRMM) satellite passed above System 90L, a low pressure area associated with a tropical wave in the Caribbean Sea southwest of Cuba. On July 27 this area was given a high (80%) probability of development into a tropical cyclone by the National Hurricane Center (NHC).

TRMM's Precipitation Radar (PR) data indicated that a convective tower within this area of disturbed weather reached to heights of over 15 kilometers (~9.3 miles). A convective or "hot tower" is a tall cumulonimbus cloud that breaks into the tropopause. In the tropics, that layer is usually about 9.3 miles above sea level. They are called "hot towers" because of the large amount of latent heat they release as water vapor.

The showers and thunderstorms associated with System 90L appear a lot more organized today, July 27, near the Yucatan Channel. The National Hurricane Center noted that radar from Mexico indicates a circulation could be forming some 50 miles northeast of Cancun this morning.

TRMM captured the rainfall rates of System 90L and noticed that the heaviest rainfall (falling at almost 2 inches (50 mm) per hour) was on the southeastern side of the storm. Most of the precipitation falling was moderate, falling between .78 to 1.57 inches (20 to 40 mm) per hour.

NHC said that "a Tropical depression could develop later today."