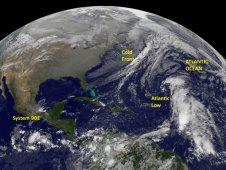 › View larger image
NOAA's GOES-13 satellite caught System 90E developing in the eastern Pacific (left) and another tropical low in the Atlantic (right) on Nov. 18, 2011 at 1145 UTC (7:45 a.m. EST). The low called System 90E appears to be getting organized on the GOES infrared imagery with the largest amount of clouds north and east of the low's center of circulation. The cold front that brought tornadoes to the southeastern U.S. is seen to the west of the Atlantic Low.
Credit: NASA/NOAA GOES Project GOES Satellite Eyeing Late Season Lows for Tropical Development

System 90E and the Atlantic low pressure area were both captured in one image from the NOAA's GOES-13 satellite today, Nov. 18, 2011 at 1145 UTC (7:45 a.m. EST). The image was created by the NASA GOES Project (in partnership with NOAA) at NASA's Goddard Space Flight Center in Greenbelt, Md.

The low called System 90E appears to be getting organized on the GOES infrared imagery with the largest amount of clouds north and east of the low's center of circulation.

System 90E was located about 475 miles south of the Gulf of Tehuantepec near 9.2 North and 95.9 West at 1 a.m. EST on November 18. It was moving to the west at 15 mph, and is producing a concentrated area of showers and thunderstorms near its center of circulation, according to the National Hurricane Center (NHC). NHC gives System 90E a 40 percent chance of becoming a tropical depression over the weekend.

Meanwhile in the Atlantic Ocean GOES-13 captured another low pressure system that has less of a chance of developing this weekend. The low pressure area is located in the central Atlantic and appears elongated from north to south. It contains a large area of clouds and showers. The low is about 900 miles east and northeast of the Leeward Islands.

West of the Atlantic Low is the strong cold front denoted by a line of clouds stretching from northeast to southwest that brought severe weather (including tornadoes) to the southeastern U.S. on November 16.