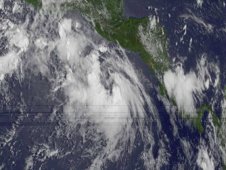 The fourth tropical depression of the Eastern Pacific ocean hurricane season was born today south of Guatemala in waters. Its baby picture was taken by the GOES-11 satellite, a veteran photographer of tropical cyclones.

It looks like Mother Nature will soon give her newborn Tropical Depression a name as it strengthens into a tropical storm later today - as the forecasters at the National Hurricane Center noted that in the storm's "baby records." Once it matures, it will get the name Dora. In fact, Dora may grow up quickly and become a hurricane in the next day or two as conditions are right for her development and "personal growth."