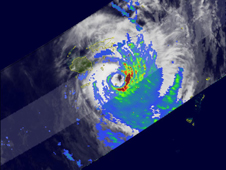 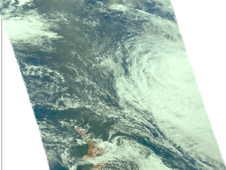 › Larger image
The Atmospheric Infrared Sounder instrument on NASA's Aqua satellite captured a visible image of the western half of Tropical Cyclone Tomas as it flew overhead on March 17 at 01:53 UTC. Credit: NASA JPL, Ed Olsen Tomas Moving Away from Fiji Islands After Causing Damages

Cyclone Tomas hit the north and east areas of Fiji as a Category 4 Cyclone on the Saffir-Simpson Scale, and has now moved south of them. NASA's Tropical Rainfall Measuring Mission satellite captured an image of the heavy rains that were falling in Tomas during his swath of destruction in the Fiji Islands.

Today, March 17, at 0900 UTC (5 a.m. EDT), Tomas was 710 miles southeast of Nadi, Fiji, near 27.0 South and 174.7 West and was a Category One cyclone. Tomas has maximum sustained winds near 86 mph (75 knots) and was speeding south-southeast at 31 mph (27 knots). Tomas is a large cyclone with hurricane-force winds extending 65 miles from the center, and tropical storm-force winds extending as far as 215 miles from the center. That makes Tomas 430 miles in diameter.

The Fiji Meteorological Service issued bulletin 32 at 2:40 p.m. EDT on March 16, which would be March 17 at 7:40 a.m. Fiji local time. At that time, the tropical cyclone warning for the Fiji group of islands was canceled. However, a Strong Wind Warning remained in force for Southern Lau only. Southern Lau was forecast to experience winds from the southwest to the northwest, waning later today. Tomas is also creating very rough seas with waves up to 23 feet and heavy swells. The rest of the Fiji islands will experience moderate to rough seas today as Tomas continues to track south and away from the islands.

The Tropical Rainfall Measuring Mission satellite, also known as "TRMM" passed over powerful tropical cyclone Tomas near the International Dateline in the South Pacific on March 15 at 2123 UTC (5:23 p.m. EDT). TRMM measures rainfall from space, and the rainfall analysis used data from TRMM's Microwave Imager (TMI) and Precipitation Radar (PR) instruments revealed that Tomas had a large circular eye, and was located about 242 kilometers (150 miles) from Fiji at that time. Tomas was decreasing in intensity but wind speeds were still estimated to be over 105 knots (~121 mph). TRMM detected very heavy rainfall of over 50 mm/hr (~2 inches) mainly in Tomas' southeastern quadrant.

Areas of north and east Fiji encountered winds near 109 mph (175 km/hour) and storm surges. About 17,000 people had gone to the evacuation centers before the storm hit. As a result of damages caused by Tomas, a "state of disaster" was declared in those areas, so that foreign assistance can come into the country. Houses were damaged, electricity, water and sewage systems were affected, and flooding was reported.

The Atmospheric Infrared Sounder instrument on NASA's Aqua satellite captured a visible image of the western half of Tropical Cyclone Tomas as it flew overhead on March 17 at 01:53 UTC (March 16 at 9:53 p.m. EDT), and it showed the storm was still well-organized.

Tomas is now quickly moving southeast and is in cooler waters, which will continue to cause Tomas to weaken. Tomas is also transitioning into an extra-tropical storm. 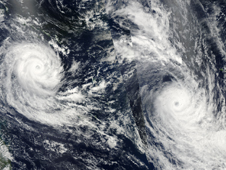 Tropical Cyclones Tomas and Ului are both causing problems for residents in the South Pacific Ocean today, March 16, and watches and warnings are in effect for the Fiji Islands and the Solomon Islands, respectively. NASA's Aqua and Terra satellites passed over each storm and their images were combined to show the close proximity of the troublemaking twins.

Tropical Cyclone Ului is farthest west and is impacting the Solomon Islands. Regional warnings that are in effect for the Solomon Islands include a tropical cyclone warning for Rennell/Bellona. In addition, a tropical cyclone watch is up for Guadalcanal, Makira, Central, Western, Malaita, Isabel and Choiseul provinces including the Shortland Islands. The gale-force winds in Rennell and Bellona and southern Guadalcana provinces are expected to ease later in the day.

At 11 a.m. EDT (1500 UTC) today, March 16, Ului had maximum sustained winds near 126 mph (110 knots) making it a strong Category Three cyclone on the Saffir-Simpson scale. It was located about 725 nautical miles northeast of Cairns, Australia, near 13.6 South and 157.8 East. It was moving southwest near 4 mph (3 knots). For updates from the Solomon Island Meteorological Service: http://www.met.gov.sb/.

The Moderate Resolution Imaging Spectroradiometer, or MODIS instrument on NASA's Aqua and Terra satellites captured an image that showed Ului's eye reduced down to 20 nautical miles in diameter, and is cloud-filled at 0305 UTC (11:05 p.m. EDT, March 15). Recent infrared satellite imagery shows spiral bands of thunderstorms continue to wrap around the storms center, and the storm still has good outflow. Sea surface temperatures are warm (at least 80 degrees Fahrenheit) and are enabling the system to maintain strength.

Ului is expected to turn west in two days, and steer toward the east coast of Australia, while gradually weakening from increased wind shear. Residents of Queensland, Australia should monitor tropical cyclone forecasts and bulletins.

Trouble is coming for Tomas, and that means weakening awaits the system as it continues moving south. Satellite data has shown that Tomas' eye has become ragged, cloud-filled and asymmetric, indicating a weakening storm. In the next day, vertical wind shear is forecast to increase, and wind shear can weaken a storm. In addition, Tomas is moving into an area of cooler sea surface temperatures which will also rapidly decay the tropical cyclone. 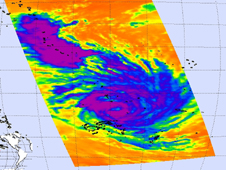 › Larger view NASA's AIRS instrument provided an infrared look at Tomas' cold thunderstorm cloudtops (blue and purple) on March 14 at 0135 UTC. The storm is more than 300 miles in diameter. The AIRS image gives a viewer a good idea of the size of the storm. Credit: NASA JPL, Ed Olsen 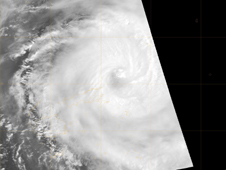 Tomas grew into a monster Category 4 cyclone and thrashed the northern Fiji Islands with heavy rains and maximum sustained winds of up to 170 mph (275 km). The Moderate Resolution Imaging Spectroradiometer instrument on NASA's Aqua satellite captured a visible image of most of Cyclone Tomas on Mar. 14 10:21 p.m. ET and noticed the storm's eye is cloud-filled.

Tomas has already caused damages for residents of the northern Fiji islands. Damage reports are still coming in, but power losses and flooding have been reported. Evacuations have taken place in Labassa, Wainiika, Nuku and Vatu because of flooding. Other reports indicate that schools and government buildings have been closed. Tourists were evacuated and flights have been temporarily canceled to and from Fiji's main airport.

Infrared satellite imagery shows that Tomas has maintained its banding or wrapping around of thunderstorms around the storm's low-level center of circulation. As Tomas continues to track in a southerly direction over the next day and a half, it is forecast to intensify a little (due to the warm ocean waters it will be passing through), then will run into increasing wind shear which will weaken the storm.

The Fiji Meteorological Service issued a forecast track map for Tomas at: www.met.gov.fj. The forecast brings Tomas's center between Cicla, Lakebda, and Kabrana to the east, and Labesa, Suva and Kadavu to the west over the next day. For the latest advisories and warnings from the Fiji Meteorological Service: http://www.met.gov.fj/advisories.html. Residents of the southern Fiji islands should monitor watches and warnings. 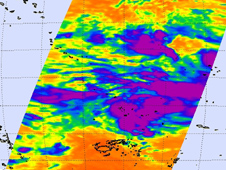 Tropical Storm Tomas is on a southern track in the South Pacific Ocean, and residents of Nadi, Fiji will be watching it as it approaches the eastern side of the island late this weekend. A tropical cyclone alert is in effect for all of Fiji this weekend.

Nadi is located on the western side of the main island of Viti Levu, Fiji. Fiji Standard Time is 17 hours later than Eastern Standard Time.

NASA's Aqua satellite flew over Tomas from space and captured in infrared image from the Atmospheric Infrared Sounder (AIRS) instrument. The AIRS image on March 11 at 20:10 UTC (3:10 p.m. ET) showed a developing storm with a large cluster of high, cold (purple), strong thunderstorms around Tomas' center.

Tropical Storm Tomas had maximum sustained winds near 57 mph (50 knots) and it was located near 11.6 degrees South and 177.6 degrees West. Tropical storm force winds extend about 150 nautical miles from the center of the storm, making Tomas about 300 miles wide in diameter.

The Fuji meteorological Service noted that Tomas appears to be getting better organized, and bands of thunderstorms are wrapping tightly around the center (usually an indication of strengthening).

Tomas is expected to intensify over the weekend. By Monday or Tuesday, wind shear is forecast to increase causing Tomas to weaken. This weekend, however, residents of Fiji can expect gusty winds, ocean swells and heavy rainfall. 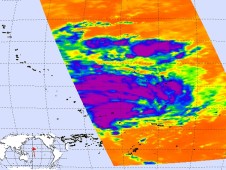 > View larger image
This infrared image of Tropical Storm Tomas from NASA's Aqua satellite was captured on March 11 at 0105 UTC (Mar. 10 at 8:05 p.m. ET) and shows some high, cold thunderstorms around the center of this large storm.
Credit: NASA/JPL, Ed Olsen Tropical Storm Tomas Calls for Alerts in South Pacific

Forecasters at the Fiji Meteorological Service (FMS) have posted a tropical cyclone alert for the South Pacific islands of Wallis and Futuna on March 11 at 05:53 UTC (12:53 a.m. ET). The FMS has also designated the storm as "Tropical Depression 14F."

The Territory of the Wallis and Futuna Islands is a Polynesian French island territory in the South Pacific between Fiji and Samoa. It consists of three main volcanic tropical islands and several islets.

Tomas appears to continue strengthening, as bands of thunderstorms continue to wrap around the storm's low level center. NASA's Aqua infrared satellite imagery from the Atmospheric Infrared Sounder (AIRS) instrument confirm some deep convection (rapidly rising air that creates the thunderstorms that power tropical cyclones). The infrared image of Tomas captured on March 11 at 0105 UTC (Mar. 10 at 8:05 p.m. ET) showed some high, cold thunderstorms around the center of this large storm.

As the storm continues to intensify and move southwest, residents of the Wallis and Futuna Islands should pay close attention to their local forecasts. It is expected to become a cyclone in the next day or two.

For updates from the Fiji Meteorological Service: http://www.met.gov.fj/.

For updates from the Tonga Meteorological Service: http://www.met.gov.to.