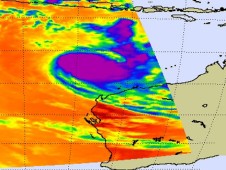 Over the weekend of April 24-25, Tropical Storm Sean fizzled out in the Southern Indian Ocean.

The last NASA infrared satellite image of Sean was taken on April 24 at 0623 UTC (2:23 a.m. EDT) when the Aqua satellite passed overhead. At that time, Sean still had some high, strong thunderstorms in its center. Some of the cloud tops were so high (and thunderstorms so strong) the cloud top temperatures were colder than -63 Fahrenheit. Since then Sean encountered strong vertical wind shear and was battered over the weekend.

Sean was last seen in the Joint Typhoon Warning Center's final warning on Sunday, April 25 at 0300 UTC (11 p.m. EDT on April 24). At that time it had maximum sustained winds near 34 knots (37 mph) and was weakening. At that time it was about 325 miles north-northwest of Learmonth, Australia, near 17.5 South and 111.3 East. It was moving in a westerly direction into open waters where it has dissipated. 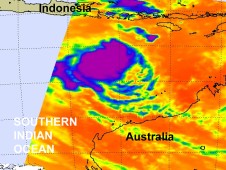 Weather systems that become tropical cyclones go through a couple of names before they mature, just like people with nicknames. Such is the case with Cyclone 24S in the Southern Indian Ocean that was just renamed Tropical Storm Sean.

When a weather system develops it is given a weather system number to keep track of it. For example, Sean was "born" as System 91S on April 21 about 630 nautical miles north-northwest of Port Hedland, Australia. On April 22, System 91S strengthened and developed tropical cyclone characteristics but wasn't quite a tropical storm, so it was renamed as the twenty-fourth tropical cyclone in the Southern Hemisphere, "Tropical Cyclone 24S." After strengthening further and reaching tropical storm status, it received a human name and became "Tropical Storm Sean." So, it went through two numbered nicknames to get its "grown-up name."

Infrared imagery is false-colored and higher cloud tops of stronger storms are depicted in purple. Sean showed a circular area of high, strong thunderstorms around his center of circulation. Those highest thunderstorms are as cold as or colder than 220 Kelvin or minus 63 degrees Fahrenheit (F).

Animated infrared satellite imagery shows convective banding (that is, rapidly rising air that condenses and form thunderstorms) keeps wrapping into the low-level center of the storm, from both the south and east of the center. Forecasters at the Joint Typhoon Warning Center note that conditions are still good for further intensification over the next 12-24 hours, but then Sean will encounter vertical wind shear and begin weakening over the weekend.

Sean is a sea storm, and will not affect any land areas over the weekend. 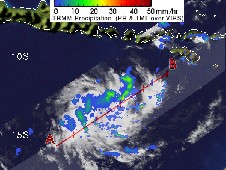 NASA's Tropical Rainfall Measuring Mission or TRMM satellite has been flying over the low pressure area known as System 91S in the Southern Indian Ocean and providing estimates of rainfall within the storm. The storm has now strengthened enough to be reclassified as the twenty-fourth southern hemispheric tropical cyclone, "24S."

TRMM, managed by NASA and the Japanese Space Agency (JAXA) passed over System 91S early today, April 22 at 3:08 Eastern Daylight Time (0708 UTC) and captured a look at the rainfall rates in the storm. TRMM found that there were some areas of light to moderate rainfall between .78 to 1.57 inches per hour.

At 11 a.m. EDT (1500 UTC) this morning, April 22, Tropical Cyclone 24S had maximum sustained winds near 35 knots (40 mph) making it of tropical storm strength. 24S was about 570 nautical miles north of Learmonth, Australia, near 13.1 South and 115.4 East. It was moving in a southerly direction at 6 mph (5 knots) but it is forecast to turn westward and head into open waters and away from Australia.

Animated infrared satellite imagery shows increased central convection (thunderstorm development) and improved banding of thunderstorms around the center of the cyclone. Because 24S is in an environment of low vertical wind shear, it is expected to further intensify for a couple of days. After that, the wind shear will kick up again and weaken the storm. 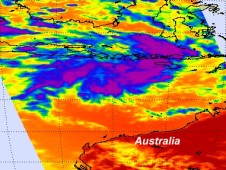 NASA's infrared satellite imagery indicates that the low pressure area currently known as "System 91S" in the Southern Indian Ocean has some punch in it, as it has high, cold cloud tops and some strong thunderstorms.

System 91S has shown increasing organization of its low-level circulation center over the last 12 hours, and favorable conditions for development. The vertical wind shear (winds that can tear a storm apart if strong enough) has decreased, so the potential for 91S to develop into a tropical cyclone is good in the next 24 hours.

The Atmospheric Infrared Sounder (AIRS), instrument that flies aboard NASA's Aqua satellite, captured an infrared image of System 91S today, April 21, and it revealed some strong, high thunderstorms around the storm's center. Infrared imagery is false-colored and higher cloud tops of stronger storms are depicted in purple in the AIRS images. Today's image revealed a lot of purple (high, strong thunderstorms) especially to the east and south of the storm's center. Those highest thunderstorms are as cold as or colder than 220 Kelvin or minus 63 degrees Fahrenheit (F).

Forecasters will be watching 91S as it continues to organize. It now has a good chance of becoming a tropical storm in the next 24 hours.