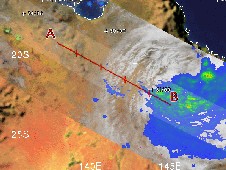 > View larger image
On January 30 at 1425 UTC (9:25 a.m. ET), the TRMM Satellite captured the remnants of Olga moving from the Queensland to New South Wales Territory. Most of the rainfall was light to moderate (green), but there were isolated areas of heavy rain (red), falling at 2 inches per hour.
Credit: NASA/SSAI, Hal Pierce Olga's Remnants Creating High Tides, Flooding

Ex-Tropical Cyclone Olga may be a low pressure area, but it's still creating some problems in the state of Queensland, Australia, while giving farmers in northern New South Wales hope for much needed rains.

Olga's remnants are drawing in tropical moisture from the Coral Sea, and kicking up winds along the northern Queensland coast. Those winds are creating high tides and causing flooding along coastal areas including the Gold and Sunshine coasts. It is also creating some scattered showers central and southern areas of Queensland and the western areas of the state.

Meanwhile, New South Wales (NSW) has been experiencing drought conditions, and farmers there are hoping that Olga the low will bring them some rain. On Tuesday, February 2, Olga's center was located in the northwestern corner of NSW. At 12 a.m. February 3, local time, clouds were building over western NSW as a result of tropical moisture coming into the low. Widespread rain is falling in that area, while the rest of the state has scattered cloud cover.

> View larger image
On January 30 at 1425 UTC (9:25 a.m. ET), the TRMM Satellite captured the remnants of Olga moving from the Queensland to New South Wales Territory. Most of the rainfall was light to moderate (green), but there were isolated areas of heavy rain (red), falling at 2 inches per hour.
Credit: NASA/SSAI, Hal Pierce Olga Now Raining On the Third of Five Australia Territories

Australians in three of five territories have had enough of Tropical Cyclone Olga. After two landfalls, and three times a tropical storm, and traveling through Queensland and the Northern Territory, Olga's remnants are now raining on Australia's New South Wales Territory today, February 1.

NASA and the Japanese Space Agency's Tropical Rainfall Measuring Mission or TRMM satellite passed over Olga's remnants on January 30 at 1425 UTC (9:25 a.m. ET), when it was moving from the Queensland to New South Wales Territory. Most of the rainfall was light to moderate, but there were isolated areas of heavy rain falling at 2 inches per hour.

An elongated area of low pressure (known as a trough) that is associated with the remnants of Tropical Cyclone Olga is forecast to extend over western New South Wales region over the next few days. The region is expected to experience widespread rainfall of the moderate to heavy variety over the next couple of days, particularly in the western portions.

The Australian Bureau of Meteorology expects some local flooding in the far northwest New South Wales region in the Tibooburra area. Other areas that may face flooding rainfall include parts of the state north of Wilcannia and Cobar and west of Walgett.

Currently there are flood warnings posted for the Darling and Warrego Rivers, but other rivers may also flood. Residents living in low-lying areas, flood plains and areas around rivers and streams should closely monitor river levels and forecasts.

As for the kinds of rainfall some of these areas can expect? If the rainfall that Olga has left in her wake is any indication, it could very well be heavy. Brisbane received .2 to .4 inches (5-10mm) of rain, however more than 13 inches (330 millimeters) of rain fell at Finch Hatton.

The New South Wales State Emergency Service is volunteers helping their communities cope with emergencies, and the Australian Bureau of Meteorology is asking citizens facing flood threats to contact them. FloodSafe advice is available at www.ses.nsw.gov.au. 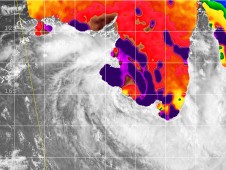 > View larger image
NASA's Aqua satellite passed over Olga at 11:29 p.m. EST Jan. 28 and the AMSR-E instrument measured the winds on Olga's eastern side to be around 34 mph or 30 knots (in red), just before she strengthened back to tropical storm status.
Credit: NASA/JTWC Tropical Storm Olga: Three Times a Lady, and Another Australian Landfall Coming

Just like 1980s song by the Commodores, "Three Times a Lady," Olga has become a tropical storm for the third time in northern Australia. NASA satellite imagery showed that Olga's center moved back into the warm waters of the Gulf of Carpentaria and it has regained strength.

Residents of the northern coastal areas in Australia's Northern Territory and Queensland are again under tropical cyclone warnings and watches, now that Olga is back in the Gulf. Olga isn't expected to stay in the Gulf more than a day, however, before it makes landfall near Normanton, Queensland on January 30.

A Cyclone Warning remains in effect for coastal and island communities from the Northern Territory/Queensland border to Kowanyama extending inland to Croydon in Queensland.

Recent radar imagery from Mornington Island, Australia, revealed that Olga's low-level circulation center is again consolidating, indicating the storm is strengthening over the Gulf. Estimated sea level pressure is near 989 millibars. The wind shear in that area is weak, so that will further allow Olga to strengthen before she makes a third landfall in northern Queensland tomorrow.

NASA's Aqua satellite passed over Olga January 29 at 04:29 UTC (11:29 p.m. EST Jan. 28) and captured an image of the storm's winds with the Advanced Microwave Scanning Radiometer-E (AMSR-E) instrument. AMSR-E measured the winds on Olga's eastern side to be around 34 mph (30 knots/55 km/hr), just before she strengthened back to tropical storm status.

Olga is already generating 15-foot high waves in the southern Gulf of Carpentaria, so coastal residents should prepare for flooding conditions as well as gusty winds and heavy rainfall. 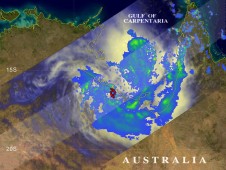 > View larger image
This is an image of Olga's (red tropical storm symbol) rainfall on Jan. 27, still inland from the coast of the Gulf of Carpentaria. It was dropping light to moderate (yellow and green) rainfall along a large area of the Australia coast.
Credit: NASA/SSAI, Hal Pierce Olga's Track is a Puzzle Forecasters are Putting Together

One of the most complicated things about tropical cyclones is forecasting their tracks, and Olga is a prime example of that problem. The Joint Typhoon Warning Center believes that Olga will remain inland over Australia's Northern Territory, while the Australian Bureau of Meteorology has forecast Olga's reemergence into the Gulf of Carpentaria.

On Thursday, January 28 at 09:00 UTC (4 a.m. ET) Olga was a tropical depression with maximum sustained winds near 34 mph (30 knots). Olga's center was still inland in the Northern Territory, and south of the coast of the Gulf of Carpentaria. Olga's center was about 34 miles west of Borroloola and 400 nautical miles southeast of Darwin, Australia, near 17.3 South latitude and 135.9 East longitude. Olga was moving south-southwest near 9 mph (8 knots), and the Joint Typhoon Warning Center expects her center to remain over land. However, the Australian Bureau of Meteorology is forecasting Olga to track north and back into the Gulf of Carpentaria.

The Joint Typhoon Warning Center issued their final advisory on Olga today, although they will watch it for possible regeneration. The final bulletin noted that "Animated multispectral satellite imagery shows convective wrapping (showers and thunderstorms) into a developed low level circulation center and upper level analysis indicates the system is in a weak steering environment with low vertical wind shear." Weak steering means that nothing is available to push the storm in one way or another, which is why the Joint Typhoon Warning Center is expecting Olga to linger inland.

The Australian Bureau of Meteorology noted in their Tropical Cyclone bulletin earlier today that "People between Burketown in Queensland and Cape Shield in the Northern Territory, including Groote Eylandt and Mornington Island, should take precautions." That's always good advice when a tropical cyclone is nearby. 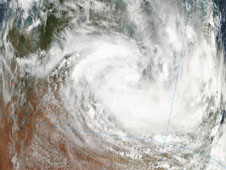 Residents of the northern coastal areas of Australia's Northern Territory and NASA's Aqua satellite have seen new life "blown into" a low pressure system that is once again Tropical Storm Olga.

The Moderate Imaging Resolution Spectroradiometer, or MODIS instrument on NASA's Aqua satellite captured a visible image of Tropical Storm Olga on Jan. 27 at 4:40 UTC (1 p.m. Australia/Darwin Time) as it was tracking from Queensland to the Northern Territory.

Recent animated multispectral satellite and composite radar imagery from Mornington Island in Queensland suggest that the low-level circulation center is still over land, and hasn't exited into the Gulf of Carpentaria.

Olga is forecast to turn north and enter the Gulf, where it will strengthen and then move back toward the east. Low wind shear and warm sea surface temperatures, ranging from 82-86 degrees Fahrenheit (28 -30 Celsius) will allow for intensification in the next two days before Olga makes another landfall near the Queensland border on Friday. 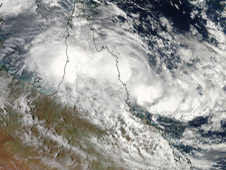 Olga was downgraded to a low pressure area yesterday as her center tracked west from Queensland into the Northern Territory of Australia. Now she's nearing the coast of the Gulf of Carpentaria and is expected to strengthen while feeding off the Gulf's warm waters. As a result, cyclone warnings and watches have been posted for parts of Queensland and the Northern Territory.

At 9:30 p.m. local Australia Time (7 a.m. Eastern Time) today, January 26, Olga the Low pressure area is located near 16.8 degrees South and 137.7 degrees East. That's near the border of Queensland and the Northern Territory and about 170 kilometers east southeast of Borroloola and about 100 miles (160 kilometers) west of Mornington Island. Olga moving west northwest at 14 mph (23 kilometers per hour).

The Australian Bureau of Meteorology noted today that "Heavy rain may lead to significant stream rises in the Roper-McArthur District." Residents between Burketown in Queensland and Groote Eylandt, including Alyangula in the Northern Territory should be prepared for heavy rains.

Olga's center is expected to remain over land, while its outer bands sweep out into the Gulf, picking up moisture and moving over warm sea surface temperatures, helping the storm to re-strengthen. Olga's path takes her northwest through the town of Borraloola and southeast of Port Arthur, then out into the Gulf before reaching Port Roper, where she's expected to strengthen even further. 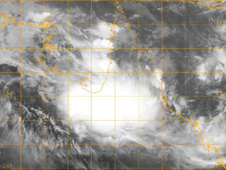 Olga was a tropical cyclone that formed in the southwestern Pacific Ocean on Saturday, January 23, and crept toward Cairns, Australia. Olga made landfall in Queensland and weakened to a low pressure area.

Ogla made landfall on January 24 at Port Douglas as a category 1 storm. Its center came ashore at around 2 p.m. Australia local time near Cape Tribulation bringing gusty winds and rains.

Today, January 25, a Cyclone Watch continues for the southern Gulf of Carpentaria coast and islands from Port McArthur to Burketown. The low pressure area formerly known as Olga is located in the northwestern part of Queensland, Australia. At 10:00 p.m. Australia Darwin Local time (7:30 a.m. ET) Ex-Tropical Cyclone Olga was estimated to be 251 miles (405 kilometers) west of Georgetown and 93 miles (150 kilometers)southwest of Karumba, near 18.3 degrees South 139.7 degrees East.

Olga the low is moving west at 27 mph (44 kilometers/ph) across the base of Cape York Peninsula towards the Northern Territory/Queensland Border.

If the low moves into the warm waters of the southern Gulf of Carpenteria it could re-intensify into a tropical cyclone, but the Joint Typhoon Warning Center does not currently expect that to occur. Meanwhile, forecasters will keep an eye on the low as it brings rainfall into the Northern Territory.