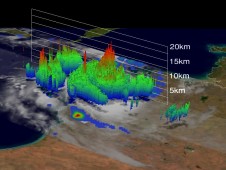 > View larger image
The TRMM Precipitation analysis showed Magda was dropping about 2 inches of rainfall per hour west of the eye, and some of the intense thunderstorms near the eye were as high as 16 kilometers (~52,493 feet).
Credit: NASA/SSAI/Hal Pierce NASA's TRMM Satellite Doesn't Need 3-D Glasses for Magda

People may need 3-D glasses to see life-like images, but rainfall and cloud data from the Tropical Rainfall Measuring Mission or TRMM satellite gives scientists a three-dimensional look at tropical cyclones without the glasses.

TRMM passed over tropical cyclone Magda on January 21 at 1927 UTC (2:27 p.m. ET) when it was off Western Australia's northern coast and soon to make landfall TRMM captured a look at its rainfall and cloud heights. That data was used to create a 3-D image of how high Magda's clouds were, and how heavily the rain was falling within the storm.

The TRMM rainfall analysis is derived from TRMM's Precipitation Radar (PR) and TRMM Microwave Imager instruments (TMI). It revealed that Magda had developed an eye before coming ashore with hurricane force winds. TRMM also showed that there were powerful thunderstorms were dropping rainfall at a rate greater than 50mm per hour (~2 inches per hour) in an area west of the eye.

TRMM's 3-D perspective of Magda showed that some of the intense thunderstorms near its eye reached to heights above 16 kilometers (~52,493 feet). Magda has since moved inland and is forecast to dissipate in Western Australia's Great Sandy Desert. TRMM is managed by NASA and JAXA, the Japanese Space Agency. 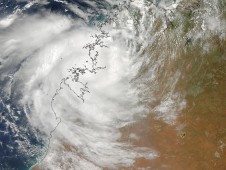 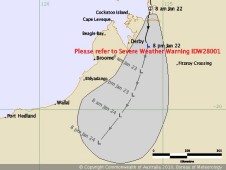 When Cyclone Magda made landfall from Collier Bay at around 5 a.m. local time on January 22 in northern Australia, NASA's Terra satellite captured an image of the storm. Magda is now dissipating rapidly over land in northern West Australia.

The Moderate Resolution Imaging Spectroradiometer, or MODIS instrument on NASA's Terra satellite provided a clear image of Tropical Storm Madga as it continued making landfall at 01:35 UTC (09:35 a.m. local time/Australia). Local reports indicated that some buildings on the Kimberley coast were damaged, but there were no injuries as the storm came ashore. Magda crossed the coast shortly before 5am (WST).

The Australian Bureau of Meteorology issued the "All clear" today for residents in or near Derby, including those in the Camballin community. The heaviest rain is located on the western half of the system, but those thunderstorms are weakening.

Tropical Depression Magda was located inland in Western Australia near 17.4 degrees South and 124.4 degrees East at 8:00 p.m. WST (7 a.m. ET) today, January 22. It was moving south at 7 mph (11 kph) and had maximum sustained winds near 30 knots (34 mph/55 kph). The Australian Bureau of Meteorology said that "No further advices will be issued for this system."

The Joint Typhoon Warning Center issued their final advisory on the storm at 4 a.m. ET today (5 p.m. Australian WST), when the storm was about 395 nautical miles east-northeast of Port Hedland, Australia, near 16.9 South and 124.5 East.

The system is rapidly dissipating and will fizzle over interior Australia over the weekend. 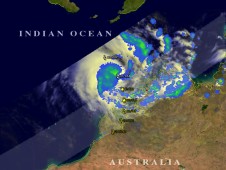 > View larger image
The track of the storm was overlaid on the image with past positions shown in white and forecast positions are yellow.
Credit: NASA/SSAI, Hal Pierce Tropical Storm Magda Puts North Western Australian on Alert

The AGBM expects gusty winds to 93 mph/150 kph close to the Magda's center Friday morning when the storm is expected to be near the coast between Kuri Bay and Mitchell Plateau. Heavy rainfall is also expected as Magda continues to strengthen as it nears the coast. .

Higher than normal tides are expected Friday between Mitchell Plateau and Cockatoo Island, and low lying areas may flood. For the latest Australian Watches and Warnings, http://www.bom.gov.au/weather/cyclone/. .

Satellite imagery shows that convection (rapidly rising air that forms thunderstorms that power the tropical storm) around Magda's center has consolidated and strengthened over the last 12 hours. That is a sign that Madga is getting stronger, and the forecasters at the Joint Typhoon Warning Center are calling for further intensification. Madga does not have strong wind shear to deal with, which is allowing it to strengthen. It is also in an area of warm sea surface temperatures helping the storm to power up. .

Magda is currently passing through the Bonaparte Archipelago and approaching Cape Leveque, Western Australia. It is expected to make landfall on January 22 at 1 p.m. ET (3:30 a.m. January 23, local time, Australia) then cross King Sound and make another landfall, passing near the towns of Derby and Broome on its track to the southwest, toward Port Hedland. It's still about 445 nautical miles northeast of Port Hedland. .

Once inland, it is expected to dissipate as a significant tropical cyclone in the Great Sandy Desert. 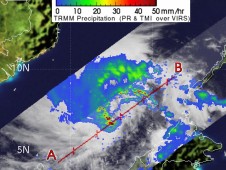 > View larger image
TRMM captured the rainfall rates of TD01W on January 18. The rainfall is all to the north and west of the storm's center. The yellow and green areas indicate moderate rainfall between .78 to 1.57 inches per hour. Red areas are heavy rainfall at almost 2 inches per hour.
Credit: NASA/SSAI, Hal Pierce First Tropical Depression of 2010 Forms in Northwestern Pacific

Tropical Depression 01W formed in the Northwestern Pacific Ocean yesterday and is now headed for a landfall in Vietnam. NASA satellite data shows that the system is weakening as it continues on its track through the South China Sea.

The Tropical Rainfall Measuring Mission (TRMM) satellite, managed by NASA and the Japanese Space Agency flew over Tropical Depression 01W (TD01W) on Monday, January 18 at 0859 UTC (3:59 a.m. ET/ 3:59 p.m. local time, Vietnam). TRMM noticed that the storm's rain fall was limited to the northern and western sectors of the storm. There were some isolated areas of heavy rainfall where rain was falling at about 2 inches per hour. However, most of the rain was moderate, falling at rates between 20 and 40 millimeters (.78 to 1.57 inches) per hour.

TRMM images are pretty complicated to create. They're made at NASA's Goddard Space Flight Center in Greenbelt, Md. At Goddard, rain rates in the center of the swath (the satellite's orbit path over the storm) are created from the TRMM Precipitation Radar (PR) instrument. The TRMM PR is the only space borne radar of its kind. The rain rates in the outer portion of the storm are created from a different instrument on the satellite, called the TRMM Microwave Imager (TMI). The rain rates are then overlaid on infrared (IR) data from the TRMM Visible Infrared Scanner (VIRS). For more information about TRMM, visit: http://www.trmm.gsfc.nasa.gov/.

Satellite data has also shown that TD01W's low level circulation center is exposed, and that the storm is in an area with vertical wind shear (which can weaken and tear a storm apart). An exposed center allows dry air or wind shear to enter the storm and weaken it. TD01W is forecast to weaken over the next 12 hours and dissipate after making landfall in Vietnam.