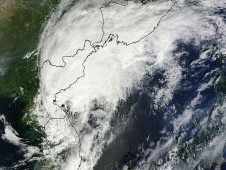 NASA's Terra satellite captured the changing Tropical Storm Kompasu over Korea and China very early today, as it makes its way east to northern Japan. It is becoming extratropical.

The Moderate Resolution Imaging Spectroradiometer (MODIS) instrument aboard NASA's Terra satellite captured a visible image of Tropical Storm Kompasu at 02:15 UTC on Sept. 2 (10:15 p.m. EDT Sept. 1) as it was moving over Korea and China. The storm appeared disorganized as there was no visible center of circulation. The Joint Typhoon Warning Center, the organization that forecasts tropical cyclones in this region, issued their last warning on the system today, as it is expected to weaken and become extra-tropical over the Sea of Japan.

At 1500 UTC (10 a.m. EDT) today, September 2, Kompasu still had maximum sustained winds near 56 mph, but they were waning. It was about 400 nautical miles west of Misawa, Japan near 40.7 North and 133.5 East. It was moving very quickly northeastward at a speedy 23 mph. It is making a transition into an extratropical storm later today. 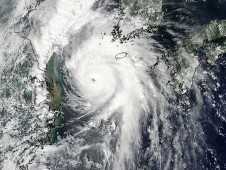 Typhoon Kompasu's Eye was filling in with high clouds in visible satellite imagery from NASA's Aqua satellite early today, September 1 as the system started to weaken. Kompasu is headed for a landfall on the Korean Peninsula late today.

At 1200 UTC (8 a.m. EDT) on September 1, Typhoon Kompasu had maximum sustained winds near 92 mph as it nears South Korea. It was located in the Yellow Sea, about 210 nautical miles south-southwest of Seoul, South Korea, near 34.3 North and 124.8 East. It was speeding north at 20 knots or 23 mph, and generating high seas, up to 19 feet as it heads toward landfall.

The Moderate Resolution Imaging Spectroradiometer (MODIS) instrument that flies aboard NASA's Aqua satellite captured a visible image of Kompasu, and showed that the eye was still somewhat visible as high clouds were filling it in, indicating that the storm is weakening. Satellite data also indicated that cloud tops are warming, so their heights are falling, indicating that convection (rapidly rising air that powers the thunderstorms in a tropical cyclone) was weakening. Strong thunderstorms are now only occurring in the northern quadrants of the storm. Kompasu is expected to weaken before it makes land fall later today. 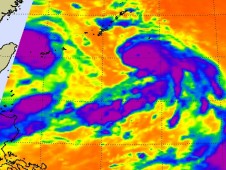 > View larger image
The AIRS instrument on NASA's Aqua satellite captured an infrared image on August 30 at 1:05 p.m. EDT of 2 of the 3 Northwestern Pacific Tropical Cyclones. Kompasu (right) to the East in the image, and Namtheun (left) to the West in the image. Both of them had high, cold thunderstorm cloud tops (purple) indicating strong convection in each.
Credit: NASA/JPL, Ed Olsen 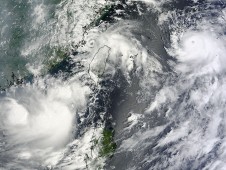 NASA's Terra satellite flew over the Northwestern Pacific Ocean at 10:30 p.m. EDT Aug. 30 and captured Tropical Storm Lionrock, Tropical Storm Namtheun, and Typhoon Kompasu in one incredible image. Two of these tropical cyclones are expected to merge, while the other is headed for a landfall in China.

On August 31, at 0900 UTC (5 a.m. EDT), Typhoon Kompasu had maximum sustained winds near 109 mph and is 45 nm east-southeast of Kadena AB, Japan. The cyclone will track over Okinawa within the next few hours and continue on a northwestward track for the next 12 to 24 hours, then cross the Korean Peninsula (from western to eastern Korea) into the Sea of Japan, cross northern Japan and exit into the Northwestern Pacific Ocean by September 4.

When the Moderate Resolution Imaging Spectroradiometer (MODIS) instrument that flies on Terra captured the image of all three storms the center of circulation was apparent in Tropical Storm Namtheun, and the eye was visible in Typhoon Kompasu, although some high clouds were filling in the center.

At 1 a.m. EDT, Kadena Air Base wasn't reporting tropical storm force winds from Typhoon Kompasu yet. Kadena Air Base is a United States Air Force base located in the towns of Kadena and Chatan and the city of Okinawa, in Okinawa Prefecture, Japan. Kadena Air Base is the hub of U.S. airpower in the Pacific, and home to the USAF's 18th Wing and a variety of associate units. Kadena Air Base did report, however, that sea level pressure dropped and amazing 44 millibars in less than 2 hours, indicating the Typhoon was approaching.

After impacting Kadena Air Base, Typhoon Kompasu is expected to turn north, then northeast and track over the Korean Peninsula and into the Sea of Japan

The other two tropical cyclones, Tropical Storm Lionrock and Tropical Storm Namtheun, are forecast to merge in the next day or two. NASA satellite data show that the two storms are in close proximity of each other. On August 31 at 0900 UTC (5 a.m. EDT), Tropical Storm Lionrock, formerly Tropical Depression 07W, had maximum sustained winds near 57 mph. It was located about 195 nm southwest of Kaohsiung, Taiwan and it is forecast to merge with Tropical Storm Namtheun (formerly Tropical Depression 09W). Lionrock has moved east-northeastward at 2 mph. Infrared satellite imagery, such as that from the Atmospheric Infrared Sounder (AIRS) instrument that flies aboard NASA's Aqua satellite was showing a decrease in convection in the storm's center. By mid-day (Eastern Time) on Thursday, Lionrock should make the merge with Namtheun and turn northwestward. It is expected to make landfall in eastern China late on Thursday, September 2 and dissipate.

On August 31 at 0900 UTC (5 a.m. EDT) Namtheun was about 80 nautical miles west of Taipei, Taiwan and moving west-southwestward at 8 mph. Its winds were sustained near 39 mph, so it was just at the threshold for being a tropical storm. The storm's low level center is partially exposed because of an upper level trough (elongated area of low pressure) to its north causing wind shear. Despite this, Namtheun is expected to remain the dominant circulation when it merges with Lionrock. 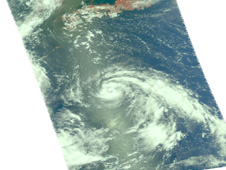 Over the weekend of August 28-29, the eighth tropical depression in the Northwestern Pacific Ocean formed and strengthened into Tropical Storm Kompasu. NASA's Aqua satellite flew over Kompasu right after it became a tropical storm on August 29 at 0411 UTC (12:11 a.m. EDT) and it appeared as tightly wound storm. The Atmospheric Infrared Sounder instrument captured visible, infrared and microwave images of Kompasu as it passed overhead from space. The infrared image revealed high, cold, strong thunderstorm cloud tops around the center of the compact storm. Those temperatures were as cold as or colder than -63 Fahrenheit indication strong convection (rapidly rising air that condenses and forms the thunderstorms that power a tropical cyclone). The convection continued to strengthen and by Monday, August 30 at 1200 UTC (8 a.m. EDT), Kompasu had grown to Typhoon strength with maximum sustained winds near 86 mph (75 knots). Kompasu was about 240 nautical miles southeast of Kadena, Japan, near 23.7 North and 131.2 East. It was moving northwestward near 8 mph, and kicking up 17 foot -high seas. It is expected to curve to the north-northeast and then become extratropical before it reaches the Korean peninsula.